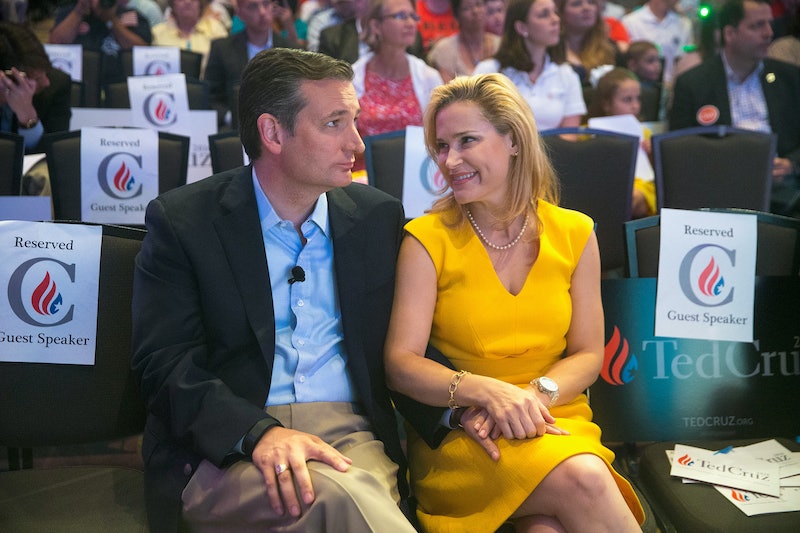 Texas Sen. Ted Cruz has maintained his position in the top three among the Republican presidential candidates throughout the 2016 election. He has made a name for himself with every debate, caucus, primary, and town hall. Although the political focus has remained on the candidates, their family members and spouses often have a large influence in their lives and careers. By now, we know a lot about Sen. Cruz. But who is his wife, Heidi Nelson Cruz?

Unlike her husband, Heidi likes to keep a low profile and is rarely in the public spotlight. She's a vegetarian, which Cruz is not, as evidenced by this photo of him grilling meat at the Iowa State Fair. Heidi lives in Houston, Texas with her and Cruz's two daughters, Catherine and Caroline. Heidi has a powerful career of her own — she was a managing director at Goldman Sachs in Houston until she took an unpaid leave in March 2015 to help her husband on the campaign trail.

Since then, Heidi has been an integral part of Cruz's presidential campaign, taking on such myriad roles as chief fundraiser, main surrogate, and high-powered political spouse. As an important part of her husband's race to the White House, and holding an impressive background of her own, here's how Heidi Cruz is so much more than a candidate's wife.

Heidi Cruz was first enrolled in school when she was eight years old, according to the Washington Post. That same year, her parents took her on a family trip to Washington, which is reportedly where her interest in politics began. A few years later, when Heidi started fifth grade, she told her parents that she wanted to attend Harvard Business School. She began at Harvard in 1998 and earned her MBA in 2000. She also received a master's of European Business from Universite Libre de Bruxelles in Brussels, Belgium.

Heidi joined Goldman Sachs as a private wealth manager in 2005. After eight years, she was promoted to managing director, according to her LinkedIn profile. She worked at Goldman for 10 years before she took her unpaid leave of absence — managing directors at Goldman Sachs have a base salary of $376,000, according to Glassdoor. However, controversy came up regarding Heidi's employer when the New York Times recently reported that Ted Cruz funded part of his 2012 campaign with a $500,000 loan from Goldman Sachs.

The Greater Houston Partnership Board

Heidi sat on the board of the Greater Houston Partnership, which is similar to a Chamber of Commerce. In 2014, the Greater Houston Partnership supported a LGBT rights ordinance in Texas called the Houston Equal Rights Ordinance. HERO aimed to provide equal and fair treatment for, and to protect the rights of, gay citizens in Houston. However, BuzzFeed News reports that Heidi did not vote on it as a board member, and strictly opposed HERO.

Chief Fundraiser For The Cruz Campaign

Throughout the 2016 election, Heidi has made public speeches advocating for her husband, and has filled in for him when he was unable to attend an event. With a strong background in finance, Heidi is arguably Cruz's best fundraising resource. From making weekly phone calls on behalf of the campaign to persuading wealthy donors to donate the maximum amount they're allowed, Heidi has raised a significant amount of money for Cruz. In fact, throughout the campaign, Heidi has had an integral role in raising the $14 million that Cruz likes to brag about during his stump speeches.

The Divine Symbol Of Cruz's Presidency

Cruz has tried to garner support by appealing to religious groups in the different primary and caucus states. By now, it's no secret that Cruz and his family are religious. But recently, Cruz's father Rafael, revealed just how strong their faith is when he said that God spoke through Heidi. Conflicted as to whether or not he should run for president, Cruz and his family reportedly attended their local church in Texas and embarked on a two-hour prayer session. During that session, Rafael recalled the moment in which God spoke through Heidi to show the family that it was, in fact, Cruz's time to run for president:

We were on our knees for two hours seeking God's will. At the end of that time, a word came through his wife, Heidi. And the word came, just saying, "Seek God's face, not God's hand." And I'll tell you, it was as if there was a cloud of the holy spirit filling that place. Some of us were weeping, and Ted just looked up and said, "Lord, here am I, use me. I surrender to you, whatever you want." And he felt that was a green light to move forward.

Impromptu Campaigner For Her Husband

Just before the Iowa caucuses, a group of University of Chicago students traveled to Iowa to experience the political frenzy in person. However, after they arrived at a Cruz event that was packed to capacity, they were denied access and forced back on their tour bus. Heidi came to the rescue and surprised the group of 24 students on the bus. In an impromptu campaign moment for her husband, Heidi spoke with the students and vowed to "do as much as we can to bring this event to you." Taking a pragmatic and authentic approach, Heidi spent her time with the students convincing them that her husband is a legitimate contender for president:

One thing I love about Ted is, because of his constitutional grounding and his very, very fine understanding of that incredible document, Ted is able to run this race genuinely on who he is as an economic, social, and national security conservative. He will govern and is going to be able to govern exactly on what he promises to do, in a way that allows all of us to live in freedom.