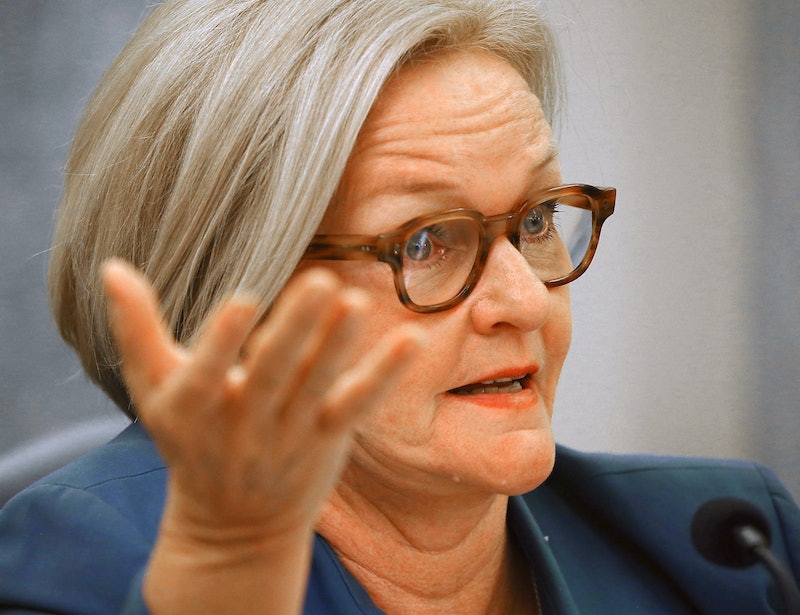 On Monday afternoon, Missouri Sen. Claire McCaskill announced she has breast cancer. She said she will be undergoing treatment over the next three weeks in St. Louis, noting that it will keep her from serving in the Senate chambers, but that she has every intention of continuing "to assist Missourians." The 62-year-old Democrat revealed her diagnosis via her personal Tumblr. In her statement, McCaskill assured her constituents and her supporters that her cancer had been caught early and that her prognosis was good, writing:

I very recently learned that I have breast cancer. It was detected through a regular mammogram. It’s a little scary, but my prognosis is good and I expect a full recovery. I will be in St Louis for the next 3 weeks receiving treatment. During this time my staff will continue to assist Missourians and I will be posting on my Senate website (McCaskill.senate.gov) how I would have voted on any matters that come before the Senate during my absence — which I’ll also enter into the Congressional record. Additionally, I’ll be submitting questions in writing for any missed Senate hearings.

McCaskill is a senior member of the Senate's Armed Services Committee, as well as the Homeland Security and Governmental Affairs Committee. She has also been one of the leading members of Congress on the topic of sexual assault reform, spearheading federal efforts to overhaul military sexual assault practices and campus sexual assault policies. McCaskill famously held onto her Senate seat in 2012 when Republican opponent Todd Akin used the term "legitimate rape" in response to a question about his abortion views. Although Akin had been leading in the polls, his popularity plummeted after he stated:

It seems to be, first of all, from what I understand from doctors, it’s really rare. If it’s a legitimate rape, the female body has ways to try to shut the whole thing down.

During this presidential election cycle, McCaskill has been serving as "one of Hillary Clinton’s top national surrogates," as Kevin McDermott wrote in the St. Louis Post-Dispatch. Just last week, McCaskill stumped for her former Senate colleague, attending the opening of her St. Louis campaign office. Addressing the crowd, she framed support for Clinton as key for the Democratic party's success, referring to Bernie Sanders as "the opponent [Republicans] want.” On Saturday, the day of the Nevada Democratic caucus, McCaskill tweeted "I want a fighter, not a fantasy. #imwithher."