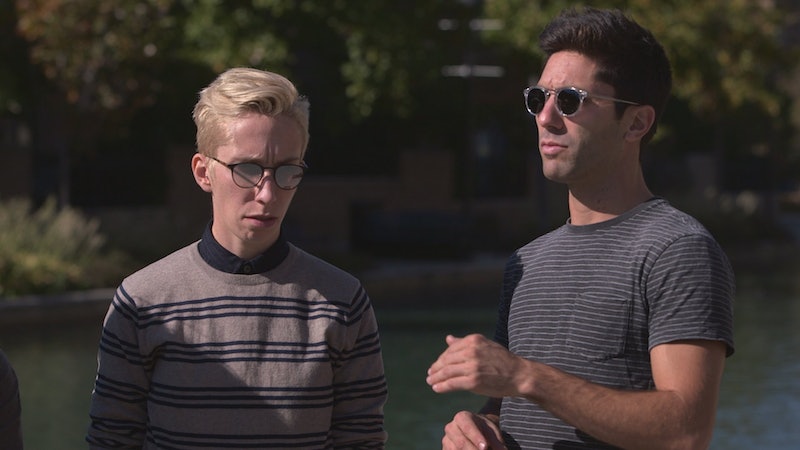 MTV's latest reality show is all about truth — and iO Tillett Wright is very interested in finding answers, but Wright also knows that "truth" isn't as simple as most people may think. Wright is teaming up with Nev Schulman of Catfish: The TV Show to work on MTV Suspect , a new show dedicated to helping people find and confront their loved ones' secrets. Schulman is no stranger to the field of dishonesty and secrets thanks to his work on Catfish, but who is iO Tillett Wright, and what makes Wright a good fit for MTV Suspect?

Wright is a photographer, actor, artist, writer, and activist who has spoken on themes of gender, identity, and the idea of truth with the ongoing project Self Evident Truths. You may also recognize Wright from the popular TED Talk "50 Shades Of Gay," which dealt with the unclear line between "gay" and "straight." Wright's work as an artist and activist, combined with an interest in helping others find their own personal truth, makes Wright a great fit for MTV Suspect, and is making the most of the opportunity.

"I think [truth is] everything. I think it’s the foundation of all relationships between human beings," Wright says in an interview with Bustle. "The cruelest thing you can do to someone is not give them a clear understanding of what’s happening especially when it affects them."

This search for truth is present in MTV Suspect, where Wright and Schulman not only seek to discover the truth, but also help those involved confront and live with these truths. "The truth is an ever-changing thing," Wright tells Bustle. "It’s an amorphous idea. The misconception is that there is a truth and one truth, but everyone’s truth is changing all the time."

This idea of a changing truth is present not just in MTV Suspect and Wright's other work, but in Wright's life itself. "Three years ago if you asked me 'Are you a New Yorker?' I’d say 'Hell Yeah! Ride or die to the end! Forever!'" Wright says. "Now I live in Los Angeles and I love it ... Things that are so true to you [at one time] — 'Justin Bieber is my life!' — three years later you can’t believe that you ever said that. Those things are not lies, they’re true. But, they’re changing as you live and you grow."

Wright's history with truth also comes out in the form of a strong sense of empathy with those who are having difficulty confronting their own truths. "We’re not trying to paint [anyone] as bad or weird," Wright says about the show. "We’re just trying to help [people] not be isolated and alone. We try to give as much power back to the secret keepers as possible."

Wright's empathy translates not just to the show, but to the audience as well. "It’s dangerous to put this idea, especially on young people, that there is one fixed truth, or one fixed identity. [People will claim that] 'If you’re a stripper, you’re gonna be a stripper forever,' and that’s not true!" Wright insists. "We try to encourage the idea that 'this is what you are into and this is what makes you happy.' The important part of this equation is that the people in you life love you and support you for you."

In this exclusive sneak peek from the upcoming season of MTV Suspect, the weight of how people are affected by the truth about people they love is made clear, and it's easy to see that Wright is more than capable of helping those affected get their lives to what Wright deems a healthy place.

Wright's empathy and interest in helping people accept their truths can be seen when MTV Suspect premieres on Feb. 24 at 11:00 p.m. And, when approaching the show, Wright would like viewers to keep in mind that "human nature is so complex. This show is not about making you cry or making you laugh. It’s about making you break down, laugh, be curious, shocked," Wright says. "Go into it with a totally open mind. Suspend your judgment. He who comes with judgment comes out at a loss. Stay open."

So, it's sure to be an intense, wide, and perhaps even cathartic ride for the subjects and viewers alike.

More like this
The Joys of Eating
By Samantha Rollins
Twitter Has Very Mixed Feelings About The New 'American Idol' Winner
By Jake Viswanath
G Flip Shared How They Got Romantic With Chrishell Stause & Discussed Babies
By Brad Witter
Twitter Is Upset About The 'American Idol' Top 3 Results: "Who TF Is Voting?"
By Jake Viswanath
Get Even More From Bustle — Sign Up For The Newsletter