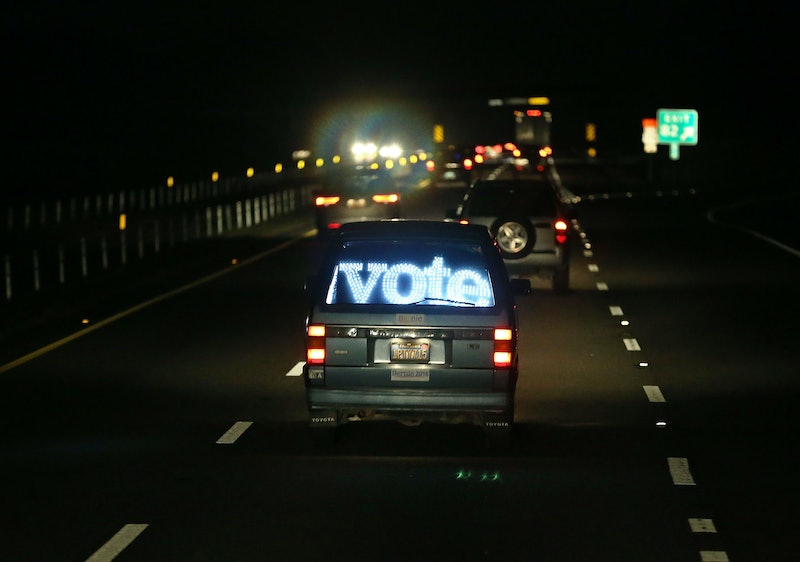 The presidential primaries are barreling full speed ahead and all anyone can talk about is Super Tuesday. Will Donald Trump sweep Super Tuesday? Can Bernie Sanders earn enough delegates on Super Tuesday to offset the number of Superdelegates pledged to Hillary Clinton? Will Ben Carson's campaign still be standing on Super Tuesday? If you're not a politics geek, you might be wondering just what the hell is Super Tuesday? Indeed, Tuesday is a day often associated with great things: tacos, $2 pints. But there's another reason why it is called Super Tuesday.

The term Super Tuesday was a nickname coined for the one Tuesday during the presidential primary race when the highest number of states hold primary electoral events simultaneously. Its usage dates back to at least 1976, when a California newspaper used the term. However, it wasn't until the presidential primaries of 1984 and 1988 that the term became more common and came to reflect the same definition it has today.

In 1984, politicians, political analysts, and political reporters got a little overeager, dubbing three different Tuesdays of the presidential primary Super Tuesday I, Super Tuesday II, and, yup, you guessed it, Super Tuesday III. It wasn't until four years later, when Democrats scheduled nine states to hold primaries on March 8, 1988, in an effort to raise the party's influence among Southern states, that Super Tuesday as we know it was born.

But Super Tuesday isn't about hitting fast forward on the primary race. There's a method to this madness. The idea is that Super Tuesday's crowded schedule moves presidential candidates away from the retail politics that dominated the first four electoral events of the season to see which candidates can run campaigns focused on national issues similar to those they'd have to run for a general election. In this regard, Super Tuesday can provide a quick sample of a candidates' electability by polling a broad and diverse group of voters in different regions.

However, it's not just the number of states participating that makes Super Tuesday so, well, super. To borrow a few words from Puff Daddy, it's all about the delegates, baby.

More delegates are up for grabs on this day than during any other day of the presidential primary. Republican presidential candidates will have 595 delegates at stake on Tuesday, a little less than half of the 1,237 delegates needed for a candidate to secure the nomination. For Democrats, 1,004 delegates will be up for grabs on Super Tuesday. Clinton or Sanders would need 2,383 delegates to be named the party's nominee at the Democratic National Convention.

A lot has already been written about the philosophy behind what's in a name. Would Super Tuesday be any less significant and noteworthy if we simply called it Tuesday? March 1 is unlikely to be the sole day that champions one presidential candidate straight to the finish line, as it will be followed by winner-take-all Republican contests in Florida, Illinois, Missouri, and Ohio on March 15 that could potentially tip the scales in different directions and allow a candidate to make up for any Super Tuesday losses.