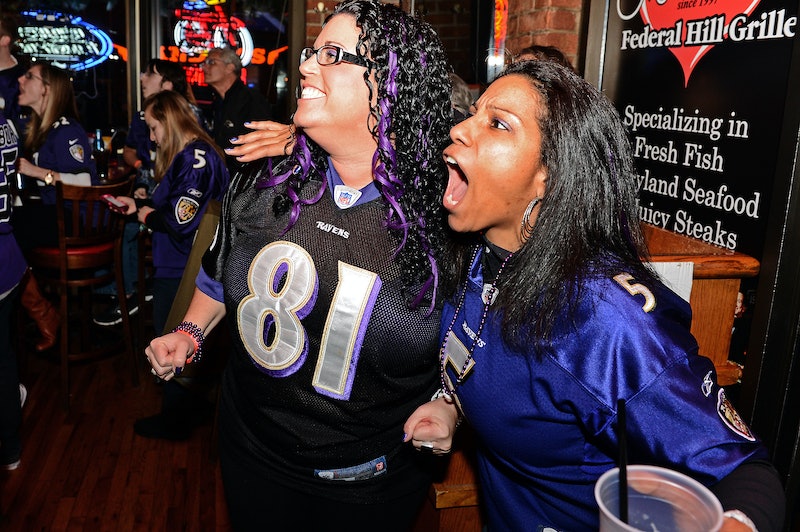 Fans, prepare yourselves today: Superbowl Sunday could be fatal, a new study suggests. According to the research, published in the journal Clinical Cardiology, the emotional stress that fans feel when their team loses can trigger fatal heart attacks, and that's especially true for people who already suffer from heart disease — so maybe take a breather every once in a while.

"Fans develop an emotional connection to their team...and when their team loses, that's an emotional stress," says the lead author of the study, Robert A. Kloner, M.D., a professor of cardiology at the University of Southern California's Keck School of Medicine. "There's a brain-heart connection, and it is important for people to be aware of that."

The study analyzed death records in Los Angeles County, focusing on the game days and following two weeks of the 1980 and 1984 Super Bowls, both of which featured Los Angeles teams. To contrast the findings, researchers also looked at the same data from the corresponding days from 1981, 1982 and 1983.

They found that in 1980, when the L.A. Rams lost to the Pittsburgh Steelers, heart-related deaths shot up 15 percent among men and 27 percent among women in the two weeks that followed, compared with the same period in 1981 through 1983.

When it came to the 1984 Super Bowl game, though — during which the Los Angeles Raiders beat the Washington Redskins by a score of 38 to nine — researchers found that the win was actually associated with a lower risk of heart-related death in Los Angeles over the subsequent two weeks.

“The Super Bowl has become a defacto holiday in the U.S.,” Dr. Simon Rego, the director of Psychology Training at Montefiore Medical Center/Albert Einstein College of Medicine in New York, told Fox News. “It’s got one hundred and ten million people estimated that’s going to watch it, and so much gets wrapped into it with the office pools, and with the friendly or not-so-friendly competition, fantasy sports leagues, recreational activities—I think there’s an intensity that comes with that level of involvement in the game and the process around the game now.”

The link between the Super Bowl and heart-health is pretty straightforward, when it comes down to it. Fans become emotionally invested in the game, and emotional stress — whether positive or negative — activates the body's sympathetic nervous system, commonly known as the "fight-or-flight" response. Your blood is suddenly pumped full of adrenaline and other hormones that make your heart rate and blood pressure jump up, preparing you to face whatever threat is out there — in this case, the loss of your favorite team. And these physiological changes can be super strenuous for people who've already got weak hearts, potentially leading to heart attacks.

"The heart is affected by emotion and stress," echoed Dr. Shephal Doshi, the director of cardiac electrophysiology at St. Johns Health Center.

Before you start penning a will with one eye glued to the screen, though, bear in mind that the study is far from conclusive. For one thing, it only looked at Los Angeles, ignoring other cities whose teams were involved. More importantly, it didn't actually find out whether those who'd suffered heart attacks had actually been Super Bowl fans.