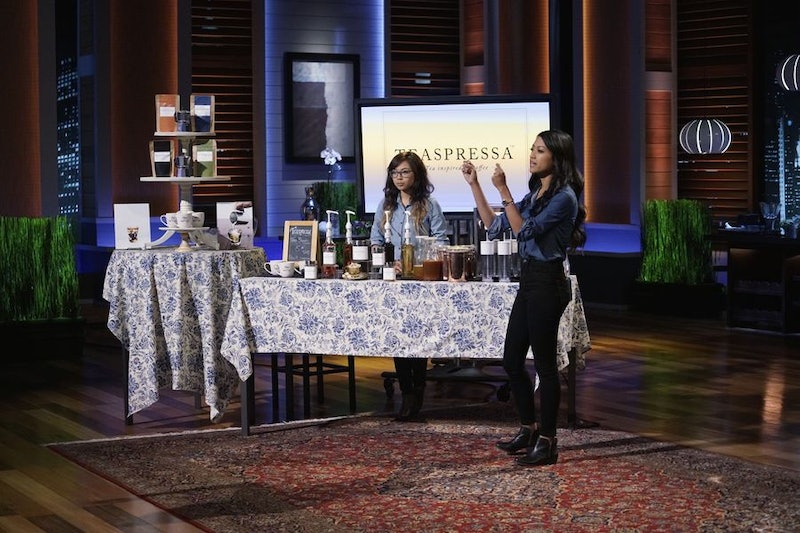 Tea has been enjoyed for centuries, so at this point, is there really anything new and exciting that can be done to the drink so that one could create a whole new company around it? We'll have to wait and see when the entrepreneur behind Teaspressa enters the Shark Tank during Friday night's upcoming episode of the show. But who knows? You might just find yourself trying to figure out where to buy Teaspressa from Shark Tank by the time the company's segment is over.

Well, if Teaspressa is going to be on Shark Tank, that means there's got to be something novel and innovative about it, right? You don't typically get to be on the show without meeting that criteria, after all. However, will Teaspressa be different enough from regular, old tea to A, capture the Sharks' attention, and B, make them want to invest in the company? Another question that we'll just have to wait until Friday night's episode to be answered.

However, there are so many tea and coffee drinkers in the world (you'll see in a minute why that other hot beverage is relevant) that I think Teaspressa has a good shot of piquing the interest of many viewers at home, even if the Sharks don't bite. And once you learn a little bit about the company and its wares, it'll be difficult for you to deny just how cool it is, too.

The Name Says It All

What does Teaspressa sound like to you? Hopefully, you recognize the words "tea" and "espresso" in there because Teaspressa prides itself on being "tea inspired by coffee." So what does that mean exactly? Well, I'll just let the description on Teaspressa's website sum it up for you:

TEASPRESSA™ is a unique, modern day approach on premium tea enjoyable for tea enthusiasts and coffee aficionados alike. We make concentrated tea shots, like espresso, that are prepared similarly as if a gourmet coffee beverage. Our flavors are an elegant infusion of both the tea and coffee worlds creating impeccable tea lattes, macchiatos and cappuccinos. The coffee lover will appreciate the robust body and high caffeine content similar to coffee with a clean, long lasting caffeine rush without the jitters or crash. The tea enthusiast will appreciate the exquisite flavors fully extracted from the tea leaves as well as the health benefits differing from each tea leaf.

So Teaspressa is basically tea that's treated as if it were coffee, which means we may have finally found something to unite tea drinkers and coffee snobs alike. I'll drink to that.

Well, if you use one of those fancy-looking Moka pots to get your java, that is. Teaspressa has instructions on how to prepare the blends that the company sells over on its website with recipes for an Americano (hot and cold), a latte, a cappuccino, or a macchiato (hot and cold). It seems like it takes more work to make a cup of Teaspressa compared to making a pot of drip coffee or boiling water for tea. But since Teaspressa is kind of like two beverages in one, it kind of makes sense that it would take twice the amount of effort.

Teaspressa actually has a lot of products brewing at once. In addition to the various Teaspressa blends, you can also buy teaccessories (see what I did there?) to go along with your drinks, including a pour over, a Moka pot, and a mug. There are some very fancy sugar cubes that have 24K gold leaf in them that you would absolutely have to sip your beverage with your pinky sticking up or else it just wouldn't feel right. Teaspressa also has a Tea Club that you can subscribe to for three months ($40 a month), six months ($35 a month), or one year ($30 a month) with a setup fee for the consumers that are all tea, all the time.

You Can Sip Some Teaspressa Now

Teaspressa's products can be purchased through the company's online store now. The tea blends cost $12 each if it comes in a pouch or $15 for a jar. You can also find Teaspressa to drink or to bring home with you in various shops, cafes, and at special events in the Phoenix, Arizona area. But if Teaspressa scores a deal with one or more of the Sharks, it won't be confined to just one metropolitan area for long.

The Founder Used To Be A Coffee Lover

Believe it or not, tea wasn't the first love of Teapressa founder Allison DeVane; it was coffee. However, she discovered that she couldn't enjoy the caffeinated beverage because drinking it gave her headaches, according to Teaspressa's website. DeVane then turned to tea, which she found was a healthy and still-caffeine-filled alternative to coffee that didn't cause her discomfort. DeVane is a self-described "proud Air Force child" who was born in Germany and grew up in Goodyear, Arizona, according to a 2015 interview with Arizona Foothills Magazine. Fittingly, she was inspired by her travels, community, and a lifelong desire to launch her own business when she started Teaspressa.

You Can Make Some Amazing Latte Art With Teaspressa

If you're a tea drinker but always feel left out of the experience of having whimsical images filling the top of your drink as latte lovers do, then Teaspressa is your jam. Since you can make lattes with Teaspressa, you can also make latte art with it, as is made very evident on the company's Instagram feed.

But of course we all know that a little smoke and mirrors can only go so far with the Sharks. Hopefully, Teaspressa tastes as good as it looks.

More like this
The Love Island 2022 Reunion Drama, Explained
By Sophie McEvoy
'Indian Matchmaking’s Vinesh Is Still Single After Season 2
By Kadin Burnett
Selena + Chef Season 4 Was Filmed At Hannah Montana's Old Malibu House
By Jake Viswanath
Indian Matchmaking’s Aparna Can Now Add Matchmaker To Her Resume
By Kadin Burnett
Get Even More From Bustle — Sign Up For The Newsletter