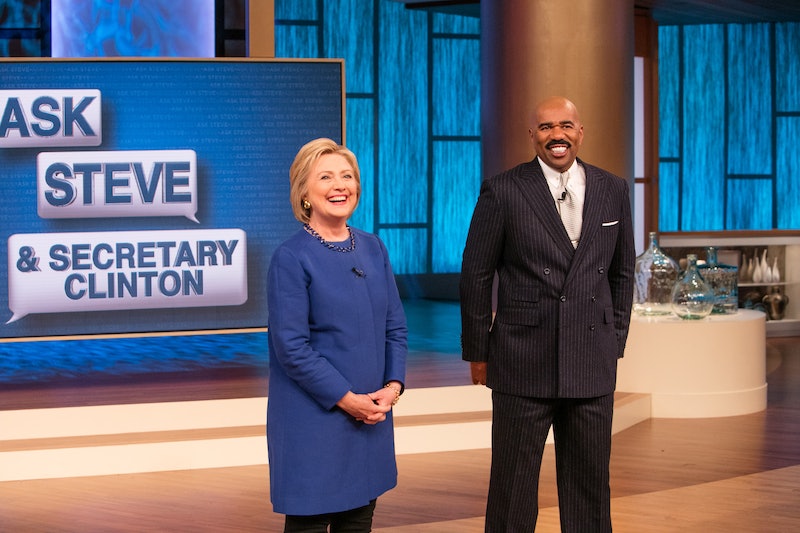 In an episode airing Wednesday, Democratic presidential candidate Hillary Clinton surprised the audience of the Steve Harvey show in Chicago. Harvey brought her out during the "Ask Steve" portion of the show, hoping that Clinton could give some input to an audience member and fellow grandmother. The audience went wild when Clinton surprised them. The segment then transformed into "Ask Steve And Secretary Clinton." She shared some of her experiences as a new grandmother, as well as some old photos from when she was a child and her years at Yale Law School.

Topics Harvey and Clinton discussed on the show included racism and gun control in the U.S. — some of our most pressing issues. In addition, the two talked about Clinton's pizza preferences, her childhood dream to be an astronaut, and that time in 1970 when she approached her future husband in the library of Yale Law School and told him, "If you're gonna keep looking at me. and I'm gonna keep looking back, we at least ought to know each other." Harvey responded, "That was pretty smooth. That was actually a player move."

She Claimed To Be From Chicago, But Turned Her Back On Deep Dish

What? Are you from the suburbs? Well, Clinton was born in Chicago, but grew up in Park Ridge. I just had to clarify, because we Chicago folk have beef with suburbanites who claim to be from the city. "What part of Chicago are you from? That's not really Chicago."

Harvey asked Clinton to answer the ultimate pizza question for a person from Chicago — a city that's been at war with New York over whose pizza is better — and I'm sorry, but we might have to disown her ... Or at least, Park Ridge might. Harvey asked Clinton, "This is an important question. No flip-flopping on this one. Deep dish or thin crust?"

The presidential hopeful responded, "Well, probably at this point in my life, thin crust." She then clarified, "I've eaten a lot of deep dish over the years, and enjoyed every bite of it." Keep it up, girl! Lou Malnati's needs you!

Harvey shared with the audience how Clinton has been "breaking ground in her personal and professional life since she was a kid." He then brought out a photo of the candidate from 1961, and asked her about her past dreams of becoming an astronaut. She told Harvey about her excitement when President Kennedy said that the U.S. would send a man to the moon:

I wrote to NASA, you know. And I said, "Well how do you get to be an astronaut?" And they wrote me back saying, "Thank you very much for your interest. At this time, we are not accepting women astronauts." And it hurt my feelings, but I could've never been an astronaut anyway. But I was happy that Sally Ride and other women got to be astronauts later on.

Come on, NASA. Why did you have to kill Kid Clinton's dream?

She Shared A Heartfelt Story About Bill's Watermelons

Harvey took the audience back to the Clintons' first-ever meeting, back in 1970 at Yale Law School. She shared a special story about their first encounter:

I didn't know who he was. I first saw him, I was walking through the student lounge and I heard this voice saying to a group of people, "And not only that, but we grow the biggest watermelons in the world." And I said, "Who is that?" and somebody said, "That's Bill Clinton. He's from Arkansas; that's all he ever talks about."

And of course, the two first spoke when Hillary approached Bill in the library and told him they ought to know each other. A true player, indeed.

Find out how to watch the full episode here.