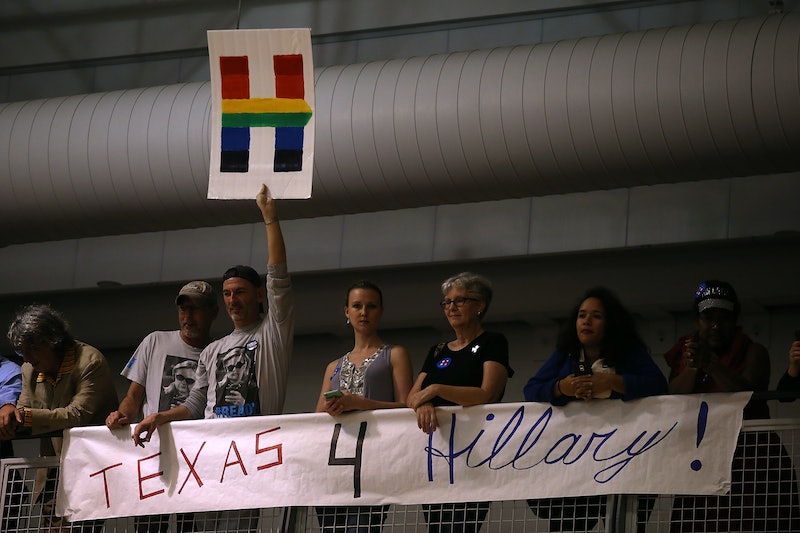 While watching the votes roll in Tuesday, one of the states is just a bit more super than the rest. Everything's bigger in Texas, and the number of delegates the Democratic Party allocates is no different. The Lone Star state has 251 delegates, by far the biggest number for Democrats on Super Tuesday. Of those, 222 are pledged delegates, which is just over a quarter of the total number of delegates assigned based on Tuesday's vote. No other state comes close.

Also voting on Super Tuesday are Alabama, American Samoa, Arkansas, Colorado, Georgia, Massachusetts, Minnesota, Oklahoma, Tennessee, Vermont, and Virginia. Of all those, Georgia comes the closest with 102 pledged delegates and 15 superdelegates. So whoever wins Texas will get a big boost — much bigger than say Vermont or American Samoa. The most recent poll averages show Hillary Clinton leading by 27 points in the state.

The vast majority of Texas' pledged Democratic delegates, 145 in total, are dealt out proportionately to the winners of each of the state's 31 senatorial districts — unlike other states that use congressional districts. Some get more, some get less, based on turnout in prior elections. Then another 77 go proportionately to the candidate who win at least 15 percent of the vote statewide. Some of those will surely go to Clinton and some to Sanders. What happens in the individual districts is where the delegate count will get interesting.

Until recently, the contest for Democratic delegates was even more complicated. Called the "Texas Two-Step," it combined a primary and caucuses. Voters would head to the polls and allocate 65 percent of the delegates based on a normal primary election. The other 35 percent would be awarded based on the outcome of a caucus held later and open only to those who had already voted.

The Texas Democratic Party said it confused voters, but it also became a source of contention in 2008 when President Obama, then in a tight race with Clinton for the nomination, got the majority of delegates despite Clinton winning the primary. The new system should allow for a fairer allocation of votes, and it prevents the Sanders campaign from pulling an Obama and out-organizing Clinton at the caucus.

At the end of the day, it will all come down to how close the vote is — and how the candidates do in other Super Tuesday states. Nate Silver at Five Thirty Eight projected that for Sanders to win the nomination, he did not need to win Texas, but he would need to reduce Clinton's winning margin from about 32 points, which Silver projected a few weeks ago, to less than 20. Massachusetts might be a good way to gauge his possibilities. Stay tuned for results.