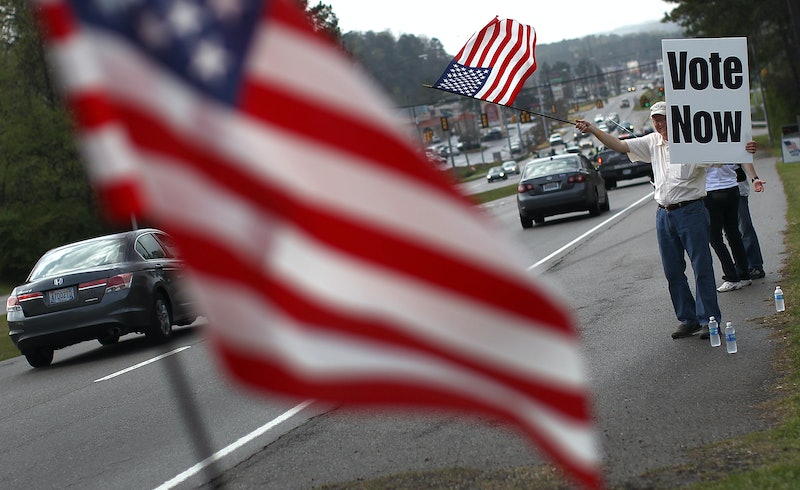 As you watch the votes roll in on Super Tuesday, one thing will take center stage in some of the states' races. Delegates are how both the Democrats and the Republicans will ultimately choose their presidential nominees at their party conventions this summer. And how these delegates are assigned is not usually as simple as proportionally allocating them to each candidate based on what percentage of the vote they receive. Some states actually give all their delegates to the first-place candidate, leaving the rest in the dust even if they come relatively close in the polls. Alabama uses the winner-take-all method, but only for the Republicans, and it is a bit convoluted.

First, let's get the Democrats out of the way. They assign the state's 53 pledged delegates based on the winners in each congressional district and the statewide total — all based on percentage. Thirty-five delegates are assigned this way, with each of the seven congressional districts getting a certain number (between three and nine). The other 18 delegates are proportionately assigned based on the statewide vote. Candidates must receive 15 percent of the vote in a certain district or across the state to get a portion of those corresponding delegates. There aren't many polls, but this should not be a problem for Sanders. There are also seven superdelegates who can do what they want.

The Republicans don't have any true superdelegates, but their delegate apportionment is more complicated. First off, the minimum vote threshold is 20 percent, and then the delegates are apportioned in a "winner-takes-most" fashion. There are 50 total delegates. Of those, 21 are assigned at the district level — each district gets three. If a candidate receives 50 percent of the vote, then he gets all three. If only one receives 20 percent of the vote, the same is also true. If two or more receive 20 percent, the first-place finisher gets two delegates, and second place gets one. Third place would get nothing. The only way they're truly assigned proportionally is if no one gets 20 percent of the vote.

The same thing (more or less) happens on a statewide basis. Twenty-nine votes are assigned based on the statewide vote. If a candidate gets 50 percent of the vote, then he gets all the delegates. Also, if only one candidate breaks the 20-percent threshold, he gets all the delegates. If more than one gets 20 percent, they split the delegates proportionally between those meeting the threshold. If no one gets 20 percent, they're split proportionately among everyone. All extra delegates due to rounding go to the person with the most votes.

This is the most interesting thing to watch on Super Tuesday, both in Alabama and a few of the other states. There aren't any recent polls on Alabama. Those that exist show only Trump having 20 percent, which means he could effectively win all the delegates. Nationwide, only Cruz averages over 20 — and just barely. Which means that this year, Alabama could become winner-take-all for Trump, even if he earns under half the vote.

Prepare to stay up watching those vote counts. It will certainly be interesting.