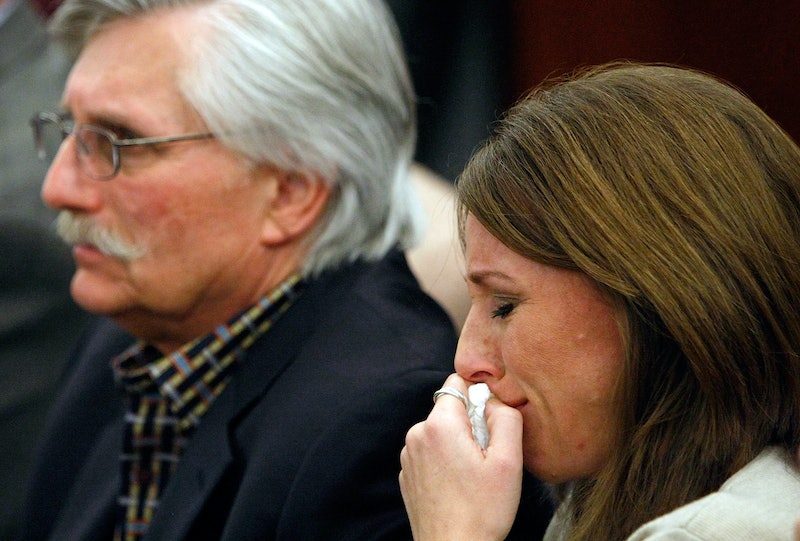 If there's one thing American Crime Story: The People v. O.J. Simpson shows us, it's that the murders of Nicole Brown Simpson and Ronald Goldman had a huge affect on the lives of a lot of people. There are the people central to the trial and the focus of to the series, like Marcia Clark and Robert Kardashian, of course, whose lives were forever changed by the events of the case. But, the series also shows how the trial's effects rippled out into the general public, who were just watching on TV, but were affected nonetheless. Who you may not see — but who were certainly, profoundly affected by the case — is the family of the victims, like Ron Goldman's sister, Kim, and father, Fred. Yet in real life, they've been extremely outspoken about Ron's murder. So, where is the family of Ron Goldman today?

It's hard for the Goldmans to move on, really, when their association to the trial continues to keep them in the spotlight. "When the whole conversation about closure comes up," Kim told People magazine, "I say, 'Here's why I don't have closure. People have at it. They tweet about it. They talk about it. Now we have a 10-episode series about it.' My brother's murder and his death will always be with me."

According to the Daily Herald, Kim is now focused on doing good in the world. "Immersing herself in not-for-profit work on causes such as AIDS, autism and developmental disabilities, Goldman is executive director of the Santa Clarita Valley Youth Project, which helps teens cope with depression, drug/alcohol abuse, bullying, academic issues, sexual identity and a lot more," the paper reported. In addition, the Daily Herald reported that she has a 12-year-old son, whose name is Samuel Ronald — the middle name a tribute to her late brother. The Herald also checked in with Ron's father Fred Goldman who, now 75, is "retired from selling real estate in Arizona."

Kim Goldman, on her website, wrote that her nonprofit work is the realization of a longtime goal. "Before my brother was brutally killed in 1994, I was studying to be a child psychologist," she wrote in her bio. "After [Ron's] death and subsequent trials, I left that goal behind and just did what I could to make it through each day and to slowly begin to rebuild my shattered life ... Finally, after all of these years, I found my way back to those long-ago dreams of counseling and therapy."

Of course, the Goldmans still can't get out from under the trial's shadow, dealing with fallout from the case seems like another full-time job. The family works to defend Ron's image in media like American Crime Story . According to her website bio, Kim is also an advocate for other crime victims. She wrote a book, Media Circus: A Look at Private Tragedy in the Public Eye , that has interviews with people like Judy Shepard (mother of Matthew Shepard) and Esaw and Emerald Garner (wife and daughter of Eric Garner). And, together, Kim and Fred acquired the rights to Simpson's book, now titled If I Did It: Confessions of a Killer , as part of the civil suit the Goldmans won against Simpson. According to People, Kim said her family has received less than one percent of the settlement to date. (Simpson was acquitted of the murder charges, but, according to The New York Times, Simpson was found liable in the resulting 1997 civil suit and ordered to pay "$25 million in punitive damages to the families.")

Basically, the Goldmans are doing the same work they started in 1994. As Kim told Extra in February 2016, "My dad and I have worked really hard to make sure that his name is always remembered and mentioned, that Ron and Nicole are not forgotten in all of this."