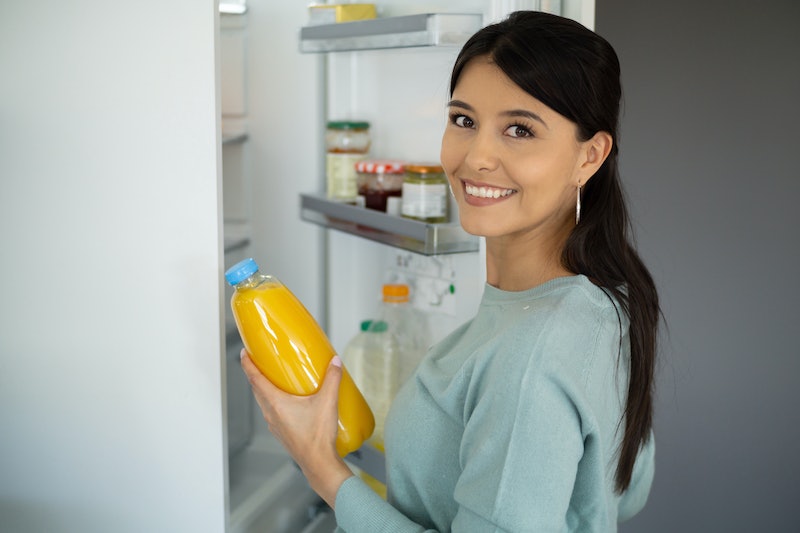 If you're no fan of oranges, it's important to know that you can get vitamin C from more places than just citrus fruit. Bell peppers, cantaloupes, kale, strawberries, and papaya all contain high doses. And that dietary intake is important; we actually can't produce vitamin C in our own bodies, and need to get our entire portion of it from our environment and diet. It's not just sunshine and orange juice, either; vitamin C is essential to proper bodily functioning, most notably in healthy collagen production and repair of bone and skin, and not getting enough will start to play havoc with your body.

The U.S. National Library Of Medicine recommends a daily intake of 75mg of vitamin C a day for adult women, and up to 120mg a day if you're breastfeeding an infant. That's not hard to get, and in today's supermarket-veg-aisle culture, where nabbing oranges is basically the easiest grocery run ever, vitamin C deficiency is very rare. If, however, you do manage to under-achieve in the vitamin C department for awhile (because of illnesses like Crohn's disease, for instance, or the demands of pregnancy, which requires higher vitamin C intake), you'll start to notice the symptoms pretty rapidly, and what may seem pretty benign could become seriously destructive when you stop getting enough.

This is probably best read with a glass of orange juice and an entire bowl of strawberries by your side; vitamin C deficiency is not particularly pretty.

1. Your Gums Bleed & Your Joints Hurt

One of the main functions of vitamin C, or ascorbic acid, in the body is the maintenance of healthy collagen levels. Vitamin C is essential to the process by which the body makes collagen, and if you're thinking "no big deal, that's just something that's used in lip plumping," think again. Collagen plays a role in the structure and function of the skin, bones, gums, blood vessels, cartilage, and the heart: it is, according to Linus Pauling, "the connective tissue that holds our bodies together." Without vitamin C to help out, collagen production in the body stops, and the domino effect is, well, not fun.

Gums tend to bleed and gingivitis can develop, because collagen has a strong role to play in healthy gums. Eye damage also results from problems with the collagen in the eye, and severe joint pain ensues because the amount of collagen cushioning bones decreases. Take away the sticky tape holding the body in its form, and things start to fall apart.

This is one of the biggest clinical signs of vitamin C deficiency: a serious capacity to bruise like a peach. The collagen deficiency is to blame for this, at its root. Apparently, the lower vitamin C levels get, the more the connective tissue in the capillary walls weakens, making them very prone to break and cause bruising. If you turn purple at the very sight of a harsh corner, a test at the doctor may be in order.

Lower levels of vitamin C will also cause more sun damage to your skin. In its capacity as an anti-oxidant, vitamin C protects the skin against certain types of UV damage, and without that contribution you'll find more skin is feeling the burn, even if there's no visible sign of it.

3. Your Hair Becomes Dry And Split-Prone

Aside from the serious internal and skin impacts of vitamin C deficiency, your hair is also going to suffer. Dryness and splitting are the most common symptoms reported for the hair on your head (splitting is called "fracturing" in the literature), because collagen is necessary to keep hair smooth and strong, but the rest of the hair on your body is vulnerable too.

In the case of really severe vitamin C deficiency, a phenomenon occurs called "corkscrew curls," where the hair follicles bleed and hemorrhage, releasing hair on the legs in erratic "corkscrew-like" curls. The technical term for this is perifollicular haemorrhage, if you want to be fancy.

4. You're At Risk Of Scurvy

At its absolute worst, when it's not treated sufficiently, vitamin C deficiency will develop into scurvy, one of the most lethal diseases of the 18th century. Scurvy used to be the scourge of the navy on long voyages; it develops over long (three months or more) periods of vitamin C deficiency, and without fresh veggies or fruit for months, sailors were particularly prone. Captain James Cook, the English sea captain who's otherwise most famous for his voyage to Australia in the 1770s, was widely celebrated at the time for drastically lowering the rate of scurvy deaths on his ships.

Scurvy is a pretty terrible disease. People become fatigued and exhausted, often lose teeth, and go on to experience serious cartilage problems, skin rashes, internal bleeding, and possible death. However, it's extremely unlikely that vitamin C deficiency will be allowed to get to this point, because scurvy these days is extraordinarily rare.

A 2014 review of the science surrounding vitamin C and the brain raised issues that we should definitely talk about. Vitamin C deficiency in pregnant women has been shown to seriously effect the cognitive development of newborns, but it also seems to have an impact after you reach adulthood. It's also been suggested, the review says, that vitamin C deficiency might have a role to play in "age-related cognitive decline": low vitamin C levels might mean your brain can't get itself together as it ages. Scary stuff.

It seems that vitamin C has an impact on the health of the brain: it's involved in neurotransmitters, the function of certain types of neurones, and help the brain's materials as it grows. And the science supports the fact that vitamin C deficiency over your life might mean that your brain declines faster and with more potential side effects than it would have if you'd eaten oranges every day.

So the lesson is clear: get a strawberry tart, kale smoothies, and bell pepper curry, and have them all for dinner. Immediately. What are you waiting for?