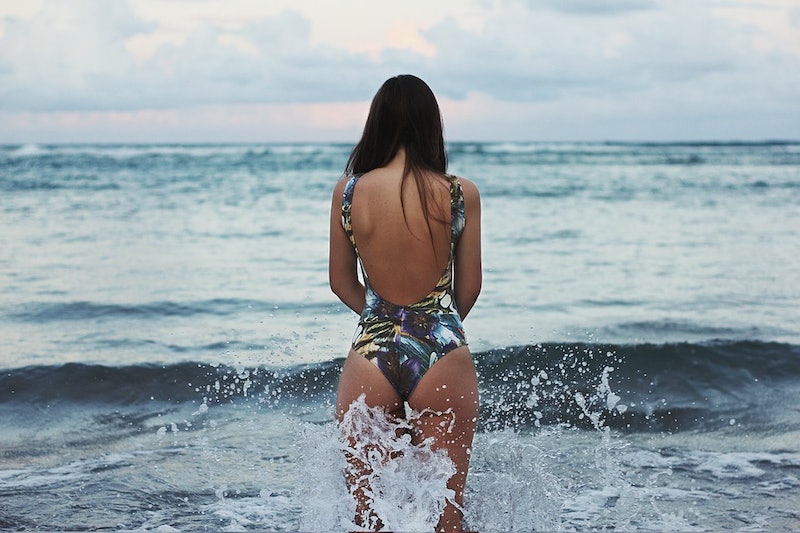 Beach season is almost upon us, so you're probably getting ready to do some bathing suit shopping, which can pose its share of awkwardness. When you head into that dressing room, you might have that second where you stand there and wonder: Should you wear underwear when trying on swimsuits? Even though it might seem counterintuitive, the answer is a hands-down, resounding yes. Please. Do not drop your panties.

The purpose of trying on clothing in the first place is to make sure the size is right before you buy it, and that means you want to try it on with the most accurate fit possible, so you might be inclined to take off your undies because it's not like you're going to wear the suit with anything under it — but don't. Do not pass go, do not collect $200. Leave your underwear on. They might feel a little bunched, but your underwear isn't going to alter the fit that much, and it's far more sanitary to leave them on. Being hygienic is worth having to endure the diaper feeling during your try-on sesh. Trust.

Just to reinforce the point, here are a few reasons you absolutely need to wear underwear when trying on swimwear. The person trying it on after will totally thank you for it.

If you're trying it on without underwear, odds are someone before you did, and you can pass on and collect bacteria. Don't believe me? Dr. Philip Tierno from New York University did a study that collected clothing from retail stores, and underwear and swimwear contained the highest amount of bacteria. Gross.

2. You Could Get Crabs

If someone was infected with crabs and tried on a swimsuit, the next person to try it on sans-undies could fall victim to them. You have been warned.

3. You Could Get Them Dirty

Bacteria and crabs aside, you could get the swimsuit bottoms dirty (no need to go into how...), so just leave your underwear on to make sure everything is clean in case you don't buy it.

4. The Sanitary Liner Does Nothing

You know that plastic liner inside the bottom for sanitary reasons? Yeah, it might protect the future owner once they remove it, but if everyone else is trying it on with the liner without undies, you're still going to pass on the same bacteria.

Forget other people trying it on before you — you don't know where else that swimsuit has been. It could have fallen on the floor or been bought, worn, and returned. There's plenty of opportunity for grossness to end up on it that you haven't even considered, so just wear underwear.

More like this
22 Chic Bridal Swimsuits For All Your Wedding Festivities
By Avery Matera
10 Underboob Bikinis That Have The Chicest Boob Cut-Outs
By Allie Fasanella
‘90s Streetwear Brands That Are Making A Major Comeback
By Dominique Norman
14 Spicy Bralette Outfits For Vaxed Girl Summer, Round 2
By Avery Matera
Get Even More From Bustle — Sign Up For The Newsletter