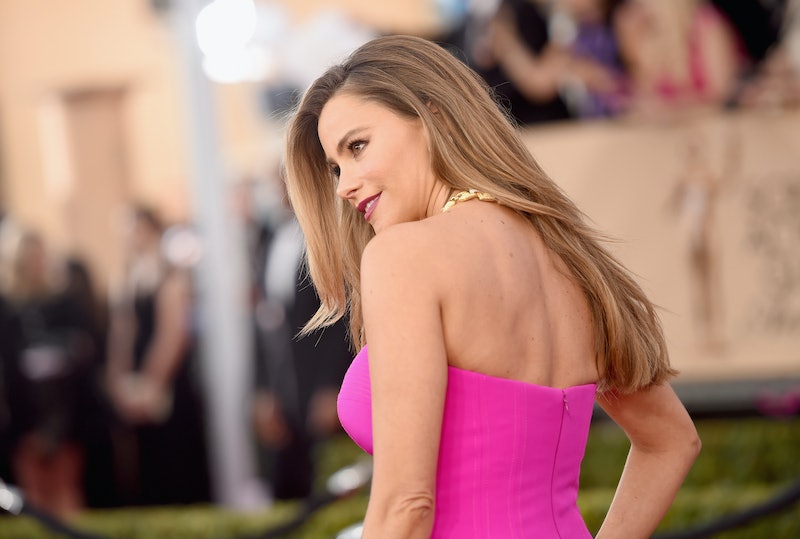 Every time the award seasons roll around, we get excited to see our old favorites: you know, Jack Nicholson looking crazed in his sunglasses, Meryl Streep with her ever-majestic bearing, and Leonardo DiCaprio hoping too hard that at long last he'll get the Oscar. Yet, very often during award season, we have some superstar wildcards, people that are decidedly "famous" but, well, seem sort of out of place when it comes to the particular occasion. This season, I know I can't be the only one who is especially wondering why Sofia Vergara is going to the Oscars... particularly after wondering why was Vergara at the Grammy Awards.

It's true that the Colombian stunner has more than a few acting credits under her belt, and, come to think of it, plenty of awards. She has yet to win for her role as Gloria Delgado-Prichitt on Modern Family, although she's been nominated several times over and the cast has won five Emmys, two SAG awards, and one Golden Globes. It makes perfect sense for Vergara to be a fixture at any of those events, you know? But, when she showed up dancing next to Pitbull at the Grammy Awards earlier this month, a double take was warranted. Like, I was glad to see her rock all those sparkles, but what on God's green Earth is happening?

So yeah, now that she's making a trip to the 2016 Academy Awards, we need to make an investigation. Because, even though it isn't an outrageous jump (she certainly belongs at the Oscars more than, you know, you or me), it's still kind of baffling. So time to ask the hard questions. First of all, was Vergara in an Oscar-nominated film last Year? Was Vergara in any film last year? She was in a sort of lady buddy comedy with Reese Witherspoon, Hot Pursuit, which came out way back in May. Earlier in 2015, she was also in Wild Card, which starred the likes of Jason Statham, Michael Angarano, Dominik Garcia-Lorido, and Stars Hollows' own Jess aka Milo Ventimiglia. Clearly — and quite sadly in the case of Hot Pursuit — these films were never even considered as Oscar contenders.

If she's not nominated, and her film credentials for this quarter aren't on the Oscar radar, it's clear that she's part of the show. And, according to the Inquisitr, Vergara is a confirmed presenter at the 88th Academy Awards.

I guess at the end of the day the "why" of "why she's at the Oscars" is simply chalked up to her star status in Hollywood. She's part of possibly the biggest comedy of the decade, she's one-half of one of the most ridiculously gorgeous couple's in Hollywood, and honestly? She's just so gosh darn delightful.