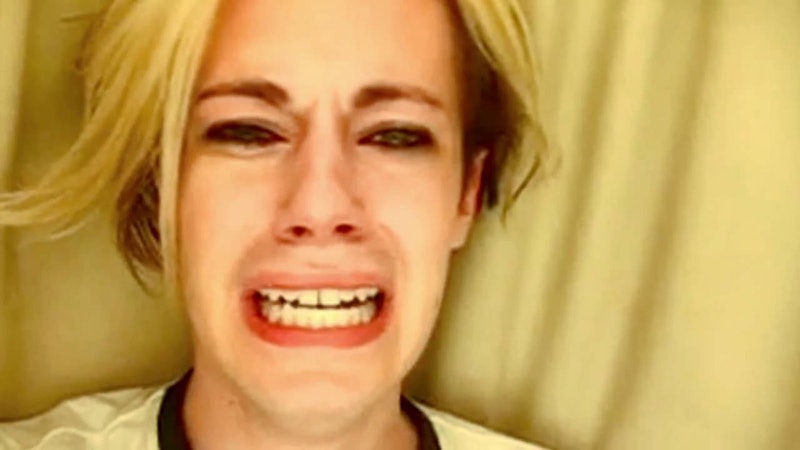 There are many questions twentysomething millennials have. Why do black holes exist? Will I survive this economy without sufficient social security? What happened to the "leave Britney alone" guy? And fortunately, we can answer at least one of them.

For those unfamiliar (or who somehow forgot), the "leave Britney alone" guy was none other than Chris Crocker. He posted a video back in 2007 — amid the epic Spears meltdown of the mid-2000s — essentially defending Britney and then spiraling into a screaming fit of "LEAVE HER ALONE." The funny part of it all is really that he had a pretty good point at the end of the day. We were using Britney's mental health (or lack-there-of) as a vehicle for media commodity and it was horrific, and we're still doing it today with other popular figures (which is mildly besides the point, but still).

Regardless, Chris was a pioneer of viral content (the very thing he was kind of speaking out against, oh, the irony). Once upon a time, it wasn't any old picture of a cat that would go viral. It took a lot for an Internet video to reach the masses, and it seems Chris tapped into something truly special the day he decided to defend Britney's 2007 VMA performance (#NeverForget).

While we know where Brit Brit is today (in Vegas, probably) and that she's doing well, we've heard little from Chris over the years. But fear not, as we have finally found him again, and the verdict is in: Crocker is a BABE. It seems over the past few years he used his notoriety as a platform for a career in music and comedy (his IG account has 333,000 followers!) He does a lot of meme-worthy videos, and a lot of "character" comedy... all of which prompts us to ask: Was the OG video actually just a performance?!?!

And it seems that alongside being funny (and popular), he is pretty #woke about media and culture and what have you. The caption on the image that people are spreading in particular reads: "We all like compliments so I'm not going to complain about the fact that 'Chris Crocker has gotten hot' has become an international headline... but at the same time, I just hope people recognize being hot is a state of mind. Inner confidence means way more than a million people affirming your 'hotness.' Thanks for the recent love. Truly. But just know: You should always let yourself feel attractive. Not just when society says you are." Daaaaaaamn, Chris. Speaking the truth since 2007.