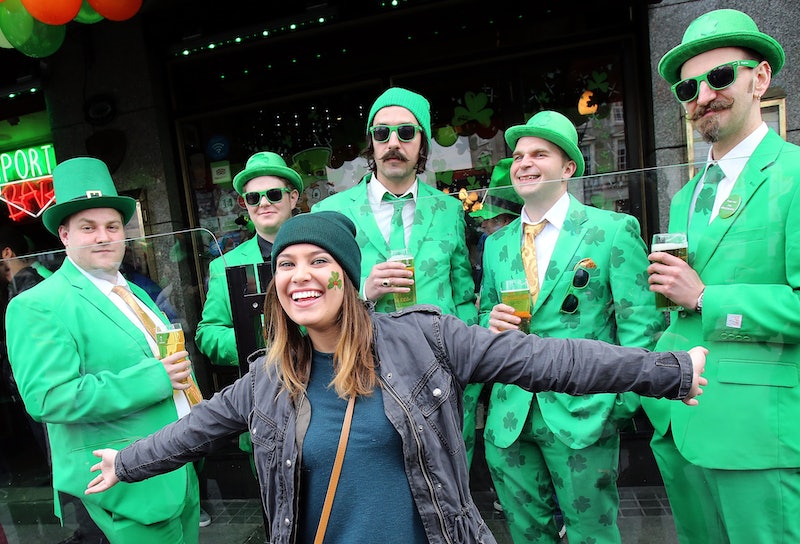 According to a study released by Wallet Hub last year, somewhere around 13 million pints of Guinness are consumed on St. Patrick's Day annually, and from what I can tell from cursory observation of the occasion during my 27 years on this earth, most of those pints will be consumed on or adjacent to college campuses. So, if you're looking for the genuine St. Paddy's experience, who better than to crack a dark, nitrogen-filled brew with than someone with The Departed poster featured prominently in his or her dorm room? These are the biggest St. Patrick's Day college celebrations in all the land.

From quad parties so crowded that, by a few minutes in, you've collected smudges of green body paint from at least three classmates to full-blown city takeovers, these schools take St. Paddy's more seriously than New Yorkers take their subway etiquette. According to legend, St. Patrick, the patron saint of Ireland, actually chased all the snakes out of the country, which is enough to convince me to pour one out for the fifth century bishop.

So get out your green, because we're about to crash the most raucous college St. Paddy's Day events that the nation has to offer.

As a place where you can walk around the whole city in just a few hours, you can expect to see revelers in the streets whenever the occasion calls for making merry. And St. Patrick's Day is no exception, as students from Stanford, Berkeley, and San Francisco State literally take over the entire city in honor of LepreCon, the warmer and more scantily clad cousin of SantaCon.

The Flyers don't mess around when it comes to block partying. The vast majority of the student body routinely swarms the streets around off-campus student housing to celebrate St. Paddy's.

I must admit, I've partied with students from WVU before when their basketball team made it to the Final Four in 2010. Those kids know how to throw down, and students are always prepared to make new friends in the name of a good time.

You know when a party has its own merch that it isn't one to be missed. The party is called Fake Patty's Day because it happens before the 17th, during the school's spring break. Miraculously sanctioned by the University itself, a committee courts and brings celebrity music acts to campus to perform for the student body.

Guys, the people of Chicago dye the river green for St. Patrick's Day. The river. They actually dye it. And, from the stories I've heard from friends who attended DePaul and Northwestern, there is plenty of green beer to match.

What?! Missouri S&T students actually get two days off of school during their 10 day-long St. Pat's celebration. Real sanctioned events include things called Snake Headcount and Cudgel Judging. I'm almost positive this party is where the phrase "I can't even" was conceived.

If you find yourself at SUNY Albany on St. Patrick's Day, check out the infamous Kegs & Eggs party. For what it's worth, some friends of mine had a (very miniature) kegs and eggs brunch the morning after their wedding, so I appreciate the sentiment of a brunchtime party.

Any given Friday night in Boston can turn into something like St. Patrick's Day, so the real thing is a huge deal when the most Irish city in the country gets to celebrate. I mean, the Boston College pep band actually plays Dropkick Murphys music during games, so you have to assume their students have the luck, the pride, and the spirit of the Irish.

Editor's Note: According to a SUNY Albany rep, the Kegs & Eggs party is not affiliated with the University at Albany. St. Patrick's Day weekend has taken place during spring break since 2013.

More like this
25 Quotes About Love To Share During Pride Month 2022
By Madeleine Aggeler and Emma Garza
Here's Your Daily Horoscope For May 24, 2022
By Mecca Woods
11 Trends From The ‘90s That Made You Feel So Cool
By Julie Sprankles
4 Things To Do & 3 To Avoid During May’s New Moon
By Brittany Beringer
Get Even More From Bustle — Sign Up For The Newsletter