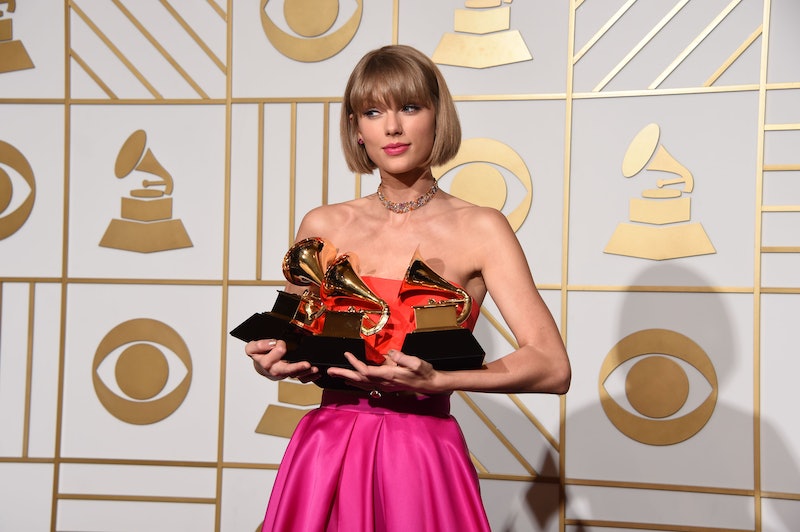 Taylor Swift is having a good year. The former country star scored major accolades this year for her most recent album 1989, the first of Swift's albums to feature an entirely pop sound. The change paid off: Swift took home the Grammy for Album Of The Year, and it solidified her status as the reigning queen of pop. Of course, the Grammy Awards weren't the only award show that this singer hit the red carpet for over the course of the last year — she was the most nominated artist at the American Music Awards in November of 2015, and made a major splash with her performance at the Video Music Awards (where she put that alleged feud with Nicki Minaj to rest once and for all.) Fans know that Swift has the music award shows covered — she's one seriously hot ticket — but will Swift also make an appearance during one of film's biggest nights? While you may see her strutting the red carpet at other shows, Swift will likely not attend the 2016 Oscars.

If Swift did score an invite to the 2016 Oscars, it would be her very first time gracing the award show with her presence. That's not to say that Swift didn't come close to earning a seat at an Oscar table — the pop star has written several songs for films that could have theoretically earned her an Academy Award nomination for Best Original Song. That includes the track "Sweeter Than Fiction," which Swift penned and recorded for the 2014 James Corden film One Chance. That track was nominated for a Golden Globe, but it was snubbed from the Oscars. In 2011, Swift recorded the song "Safe And Sound" for the Hunger Games soundtrack with the band The Civil Wars, but, unfortunately, the tune failed to garner any Oscar buzz, despite shooting to number one on iTunes the day of its release.

Typically, people are invited to the Oscars only when they have a hand in making a film, or are invited guests of people who do. Right now, it doesn't seem that anyone Swift is particularly close to has an extra invite to the award show, which means that, like most of us, she'll have to watch the ceremony from home. However, she might not be too far away from the action: though Swift likely won't have a seat at the ceremony, her presence could be requested at some of the star-studded after parties. In 2014, Swift hit the Vanity Fair Oscar party, and there's a chance she'll once again be asked to attend. And really, isn't the after party half the fun?