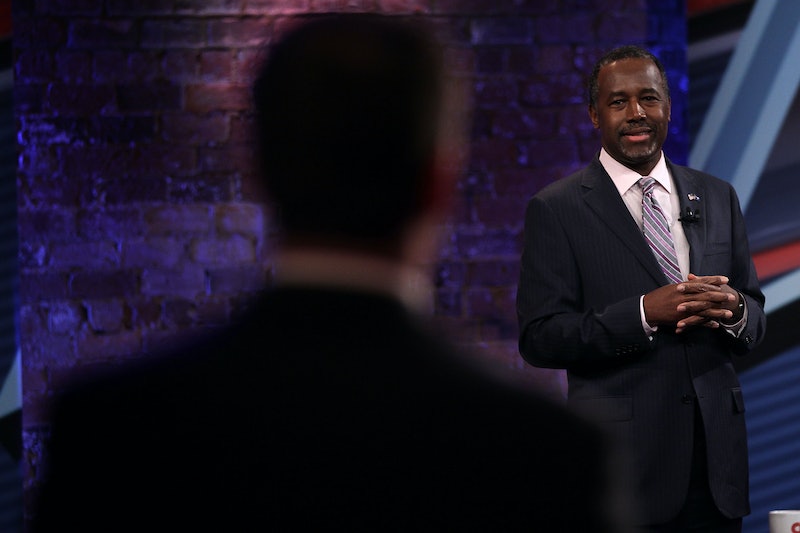 In a Politico podcast released Saturday, Republican presidential candidate Ben Carson said that President Barack Obama was "raised white." Carson also cited how Obama spent a lot of time in Indonesia growing up to suggest that this limits the president's ability to identify with black Americans. "He didn’t grow up like I grew up … So for him to, you know, claim that, you know, he identifies with the experience of black Americans, I think, is a bit of a stretch." As the interview progressed, it became clear that there's more to Carson's assessment of the president's black-Americanness (and black-Americanness in general) than where one grows up — it has to do with the conflation of race and class.

A bit of biographical information: Obama was raised mostly by a white mother and white grandparents, and grew up middle-class. Carson grew up in poverty in Detroit, and his single mother worked three jobs. This on its own would not be enough evidence that Carson is conflating blackness with poverty, but his remarks when asked whether race was a factor in the Flint water crisis point in that direction. He said, "A lot of things that people classify as racism is classism, and believe me, there's a lot of classism in our society. And if people of a certain race happen to fall into a lower class, then they get the brunt of it.”

There is something fundamentally odd about Carson's assertion that Obama was raised white, because it contains within it the insinuation that there is only one way to be black or experience blackness. There is only one way to be raised black. It strongly suggests that Carson believes that is directly connected to the racial identity of one's caregivers, the racial makeup of one's school and surroundings and the socioeconomic experiences that, in this country, remain closely but not absolutely linked to race.

Carson's claim that Obama was "raised white" and thus can't identify with black Americans ignores the impact race has had on Obama — something he has written about in many books. Ta-Nehisi Coates has written extensively on the inaccuracy of conflating racism and classism. In one piece for The Atlantic, he said:

Intersectional analyses seek to make distinctions between different forms of oppression, while also acknowledging how they can overlap without reducing them to one another. While poverty disproportionately affects blacks, the intersectional lens fosters an understanding that racism is still present in society and cannot be reduced solely to class issues. Yes, poor blacks may suffer more than those who are well-off, but that doesn't somehow wash away the impact of racism on upper-class blacks. Carson flat-out questioned whether racism is present in American society today. He said during his Politico interview: “Remember now, I’ve been around for 64 years, you know. I’ve had a chance to see what real racism is.”

Carson later defended his comments about Obama, stating on CNN, "I grew up in Detroit, and I grew up in Boston. In Boston, we lived in the ghetto. There were a lot of violent episodes there. There were rats, there were roaches. It was dire poverty ... Now, let me contrast that to the president, who went to private schools, grew up in a relatively affluent environment, had an opportunity to live in multiple cultures and different countries. I think that's a very different experience."

When asked if he's experienced racism in politics, Carson said that he has, but only from progressives who "assume because you’re black, you have to think a certain way." So, while disdaining what he sees as arbitrary limitations on how black people are supposed to think, he simultaneously posed himself as an arbiter of what constitutes the "real" black experience and "real" racism. As the headlines pour out and Twitter fills with commentary, it doesn't look like the comment played to Carson's favor.