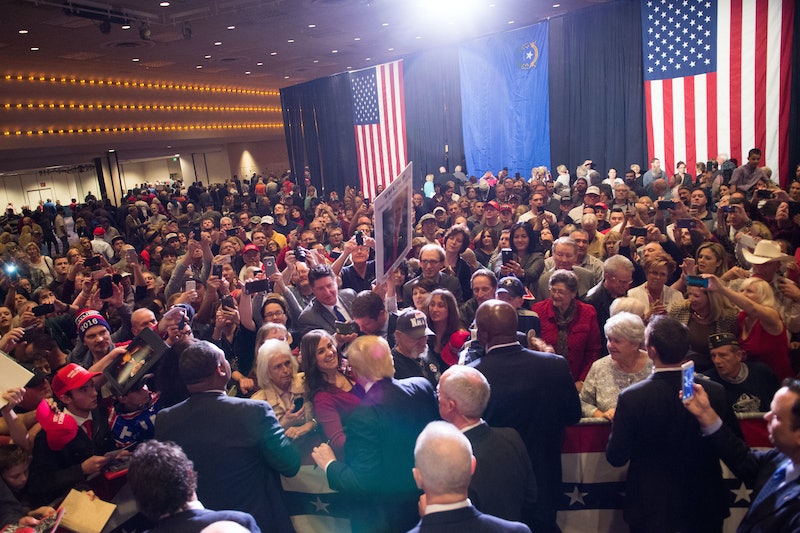 The Nevada Republican caucus, by all accounts, is shaping up to be absolute mess. There have been reports of not enough ballots at certain sites, voters receiving too many ballots at others, ballots being given to people who don't have IDs, and even some allegations of double-voting. The Nevada caucuses' problems have turned the state's nominating contest into, in the words of one observer, "a shit show." The Nevada Republican Party hasn't yet replied to Bustle's request for comment. However, a Republican official acknowledged there had been some issues and gave the following statement to Nevada reporter Jon Ralston:

Obviously we take reports of double voting very seriously and we will be reviewing ballots. There is a master sign in sheet and that we will be checking closely as well. In terms of running out of ballots, we were prepared for that and more were on site in a matter of minutes. Other thing to know is because you have multiple precincts in one spot, not the entire place was in chaos, just a select few that were rushed which contained the problems.

Accounts of the apparent dysfunction are still filing in, and some have been easier to verify than others. The Nevada GOP has denied any "official reports of voting irregularities or violations."

Still, the reports are damning. In the "relatively innocuous" category, we have the multiple reports of caucus sites running out of ballots. That's not a good thing, of course, but according to Mashable's Emily Cahn, the problem was resolved pretty quickly after the Nevada Republican Party was notified of the problem.

More problematic are reports that some caucus goers received ballots without showing ID. Considering that a few famous out-of-staters were spotted at caucus sites, this brings up the disconcerting possibility of non-residents voting in the caucuses. Even more troubling than that, though, are the allegations that some people voted twice at certain sites.

Oh yeah, and let's not forget the the "caucus site" for precinct 1303, which apparently was not even set up by the time voting was supposed to start.

There was at least one potential controversy that didn't turn out as bad as it initially appeared. Several photos surfaced of volunteers at caucus sites wearing Donald Trump gear, which would seem to be a violation of election law...

...But it isn't. A Nevada GOP official confirmed to BuzzFeed that wearing campaign shirts, buttons, and hats isn't actually against the law. So, well, at least that's one sort of good thing about the Nevada caucuses: Nobody was in violation of a law that doesn't actually exist. Other than that, it seemed to pretty much be a disaster.