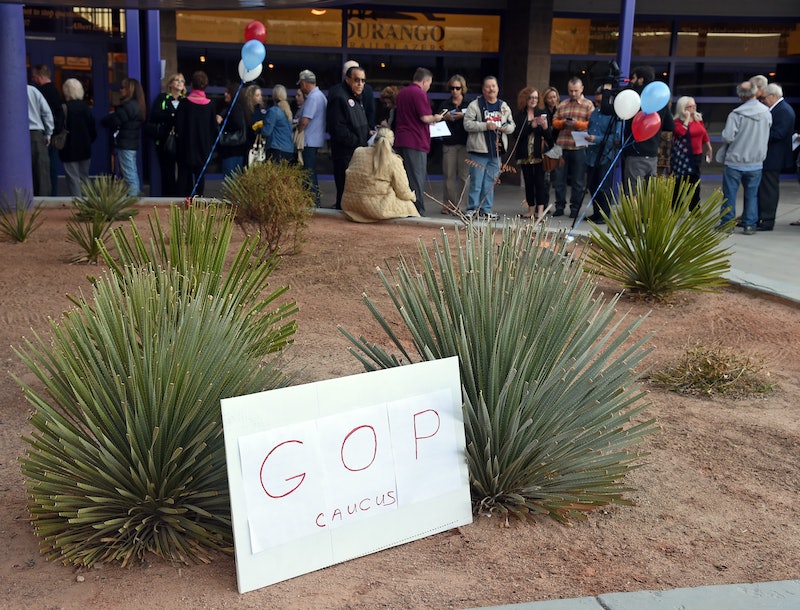 On Tuesday, Nevada's Republican caucus quickly became a punchline. After struggling to find parking and waiting in long lines outside, caucus-goers stepped into to their caucus locations to find ballot shortages, workers wearing campaign clothing, and even alleged instances of double-voting. While participants remained frustrated throughout the process, others found hilarity in the whole debacle, coming up with some common and funny Nevada GOP caucus jokes. (Note: Keep reading, because this could be your only chance to see the words "caucus" and "jokes" in the same sentence.)

The problems with the Nevada caucus were quickly and widely reported on social media. Several candidates who had already dropped out of the GOP's race were still printed on the ballots, which could have caused confusion among voters. Additionally, caucus-goers complained that there were ballot workers wearing t-shirts that supported candidate Donald Trump. Although the state's Republican party reassured the public that all red flags would be investigated to preserve the integrity of the caucus process, the jokes just kept coming. It's safe to say that the Democrats were probably heaving a YUGE sigh of relief, having escaped the same sort of widespread criticism during a much smoother caucus process of their own on Saturday.

Everything Is Going Up In Flames

If you're wondering how people felt about the caucus, imagine how you feel sitting at work on Monday morning when you read 15 new emails about your to-do list, a deadline one of your coworkers missed, and the dreadful reminder that the coffee maker is broken. Everything was pretty much just going up in flames. And there was no putting this fire out.

...Pretty much everything is going wrong. O.K., so not everything went wrong, but it certainly seemed that way. The very fact that problems like long lines and ballot shortages were even a discussion point represents a difference between Tuesday's caucus and previous Republican primary contests.

Toward the beginning of the evening, news from the caucus seemed mostly positive. After all, long lines and little parking must mean record voter turnout, right? Of course, record voter turnout could then mean unmanageable crowds and rushed workers... so maybe someone should have seen this coming.

Pick a disaster or tragedy from history that stands out to you. War, natural disaster, etc. — it doesn't matter which one. That's what the Nevada caucus felt like to some participants on Tuesday night.

The drama in Nevada could become the GOP candidates' newest attack to add to their stump speeches. It could also give Trump some new enemies to target on Twitter. Either way, you've got a good punchline out of it. Next time someone asks how you're doing before 9 a.m., tell them you're about as good as the Nevada Republican party on caucus night.