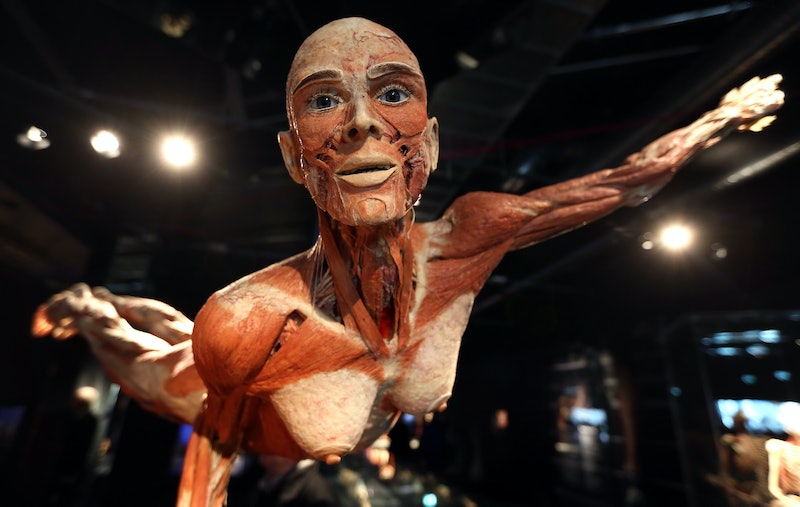 Sometimes, after a long week, all a person really wants to do is read about alternative burial methods, am I right? If, like me, you think that regular funeral plans are way too boring, and you want to leave your mark on the world, you might want to consider plastination. Though this technique, which preserves human bodies by adding plastics to them, might sound bizarre, it's actually not that out there — and if you've visited any of the Bodyworlds exhibits that are mounted around the world, you're already familiar with this unusual bodily preservation process.

Invented by the awesomely named Gunther von Hagens in 1977, plastination is all about preserving body parts in plastic to better study them. Discussing the brainwave that led to his invention, von Hagens said, "One day, I was in the butcher shop in the university town where I was studying, and as I watched the sales woman slice ham, it dawned on me that I ought to be using a meat slicer for cutting kidneys." While this is not the kind of epiphany most of us would have by any stretch of the imagination, it was certainly a game changer when it came to preserving and studying the human body. By "replacing the water and fat contained in tissues with a reactive polymer such as silicone rubber, epoxy, or polyester resins," plastination provides a unique way of preserving human organs, or even entire bodies. So, what exactly should we all know about the process, and should we be signing up to have it done?

As Gunther von Hagens' official website states, "Traditionally, medical students familiarize themselves with the human body through a process of removal. First they remove the skin from the corpse, then they detach muscle after muscle from the limbs, and finally conclude by removing the chest and abdominal walls." Plastination is about preserving the body in a different way, and as "an innovative preservation method, it does, however, make it possible to create completely new types of specimens."

No Other Process Can Preserve A Body This Well

As an article on Scribol says, the process of plastination "preserves bodies in such a way that they can be touched, do not smell or decay, and can even be posed." It's incredible to think that after you die, your body could be preserved completely, wouldn't decay or get gross in any way, and could become part of an exhibition viewed by people for decades (more on that below). Certainly beats taxidermy, and makes burial seem like a bit of a waste.

It's Also Considered An Art Form

As well as providing a unique way of studying real-life samples of the human body, plastination is considered to be an art. Exhibitions of plastinated bodies often tour art galleries, and there's a permanent exhibit of plastinated bodies at Discovery in Times Square. The Guardian noted the controversy caused when "some 25 corpses, along with 175 body parts" were "displayed at the Atlantis Gallery in Brick Lane, in an anatomical exhibition of real human bodies." Just think, your body could be on show in an art gallery someday, finally appreciated for the beauty that it contains!

How Long Does It Take To Plastinate A Body?

According to Bodyworlds, the official home of the process, "Dissection and Plastination of an entire body requires about 1500 working hours and normally takes about one year to complete." Good news for those who are scared of passing on, isn't it? Not only will your body (or parts of it) be preserved for all eternity, but the plastination process will take so long — there's life in the old body yet.

How Much Does Plastination Cost?

NBC News reports that plastinating a whole body costs "between $40,000 and $60,000", which isn't cheap. But, as you'll see below, if you choose to plastinate, you won't be paying for the process yourself.

I Like The Sound Of This. Can I Opt To Be Plastinated When I Die?

One can't opt to be plastinated and then kept in the family living room for eternity — the only way to be plastinated after death is to donate your body to an organization that plastinates. The Bodyworlds website thanks previous donors and encourages others to donate their body to be plastinated. The site says, "Many donors underscore that by donating their body, they want to be useful to others even after their death. Their selfless donations allow us to gain unique insights into human bodies." NBC News discussed the case of Stace Owens, a "33-year-old real estate agent from Dallas" who is "among more than 7,000 people who have agreed to donate their bodies for plastination." It's a viable option that costs you nothing!

What Will Happen To My Body Once It's Plastinated?

Perhaps the only major drawback to plastination is the fact that once you've donated your body, you have no control over what happens to it next. It could end up in an exhibition somewhere, or it could be sold to some rando and end up exhibited on their bedside table.

And the system is certainly not without controversy: Critics of Gunther von Hagens have claimed that his work is distasteful and akin to mutilation. After drawing criticism for an exhibition in 2010 at which he sold plastinated body parts, the scientist was defensive, saying, "This is like a jewelry shop. All the items — the body parts — which are on sale are beautiful and they are for eternity. It isn't disgusting. The human body is beautiful."

While some plastination haters say that, as reported by NBC News, "von Hagens’ shows violate the sanctity of death," the creator remains dedicated to the cause. When asked about his future plans in 2010, von Hagens said, "I've got 670 dead bodies and I've got a lot of ideas. I'm planning to expand the body-parts store and I want to set up a mail-order business, so people from all over the world who are interested can buy parts of the body with one click of the button." If nothing else, you certainly must agree that he's a man on a mission.

I can't tell you whether or not plastination is for you, of course — for some, it's an exciting way to contribute to science, while for others, it is the creepiest possible way to go out. But it's nice to have options, right?