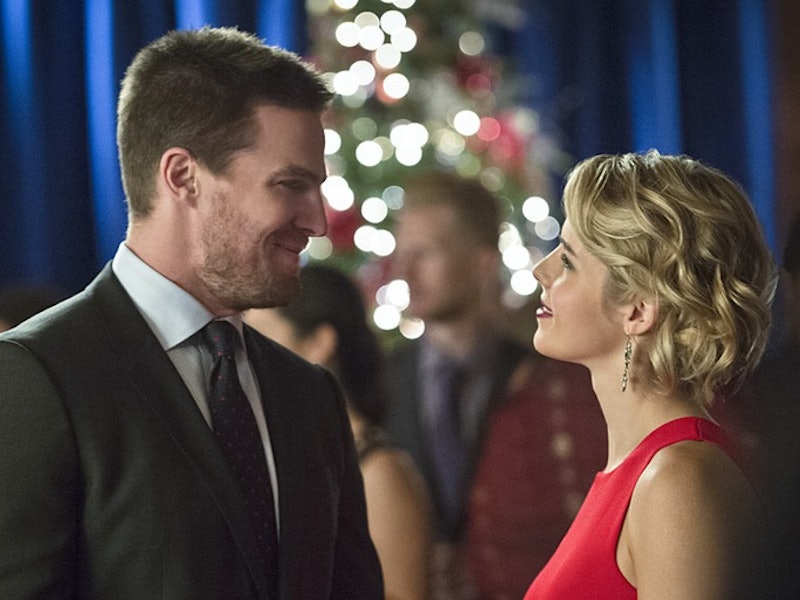 All right, let me give it to you straight. After seeing Arrow show runner Marc Guggenheim and the Green Arrow himself, Stephen Amell, tweet what appears to be a wedding photo of Olicity, I was a non-believer. I had this whole thing planned out about how OBVIOUSLY Olicity couldn’t be getting married yet. I saw the theories. I theorized myself. It was a dream. A hallucination. A… something. But I knew it definitely wasn’t a real wedding. It couldn’t be real. Then, Guggenheim shot all that to hell and made me look and feel like a big ol’ idiot. Because apparently, Olivier and Felicity are getting married on Arrow. Like Jon Snow, I know nothing.

Again, Guggenheim tweeted the picture of Felicity Smoak and Oliver Queen at the altar looking all sorts of done up and gorgeous, but, this time, he wrote, “Not a dream sequence. Not a hallucination. Not an alternate reality. Not a flash forward to a potential future.” So, yeah, there goes all of that. Obviously, he thought that the salt wasn’t thoroughly rubbed into our gaping Olicity shaped wounds yet. He was right. Ouch. A wedding seems like the last thing that's about to happen if Felicity belatedly finding out about Oliver's son in the upcoming episode is any indication. Like any too-invested viewer, I assumed they'd be breaking up over the lie before they'd be exchanging vows.

In fact, in an interview with Entertainment Weekly , Emily Bett Rickards even said Felicity would be fairly heartbroken over it. She explained that,

We saw how she reacted to her finding out about his son in an alternate timeline in The Flash crossover. I feel like her feelings there weren’t unprecedented, but obviously it was a different timeline. With this coming up, it puts a big stake in their relationship. It makes it known that she doesn’t really know 100 percent who she’s in a relationship with. I think that that scares her and makes her untrusting whether she should have more leeway with him at this point. It hurts her pretty bad.

So, if this isn’t some dream or hallucination or mirage for our thirsty selves, what the hell is it, then? Well, there are a few fans who have a pretty good idea of what may be going on, and they aren't happy about it. Per crazy Cupid’s return to the show, people are guessing that this “wedding” will serve as a trap for her.

While that theory makes sense, that’s not to say that Guggenheim isn’t being straight with us, either. It’s totally possible that Olicity does, in fact, get married, no Cupids involved. It’s just that, remember that flash forward? She doesn’t have the ring on in it. Not a wedding ring or an engagement ring. Her hand is totally bare. We can't just ignore that tremendous hint.

Here's my take on the whole thing: Maybe Felicity doesn't initially end things with Oliver after she finds out about the lie. Maybe she's angry, but oddly understanding due to her own father leaving her. Maybe she tries to cope with his deceit and, in doing so, decides to go through with the wedding. But, maybe, just maybe, as she's standing before him on the altar, she realizes that she can't do it. She can't marry someone without trust. Maybe the wedding is real, but she really leaves Oliver at the altar.

Maybe Felicity is a runaway bride.