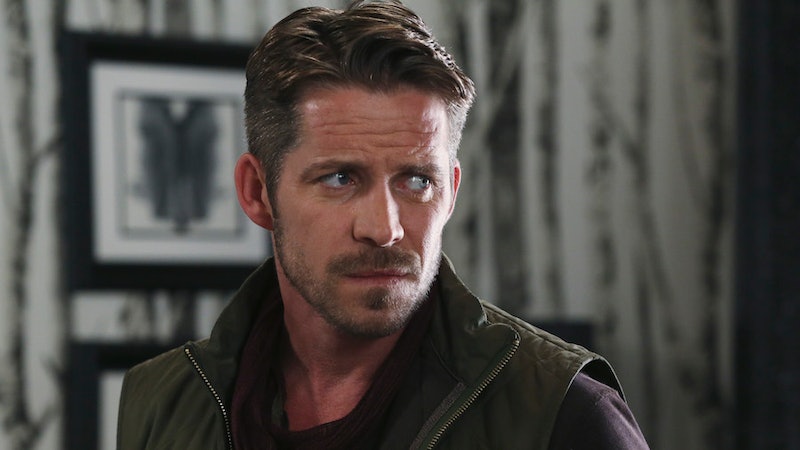 I can't even believe it's almost March already, let alone almost time for the Once Upon A Time Season 5B premiere. But indeed, the latter is upon us in less than two weeks, so I hope you're ready for a trip to the Underworld. Given that the premiere also serves as the 100th episode and is going to feature a whole bunch of familiar (and very dead) faces, I'm sure we're in for a bumpy ride. Can Hook be brought back from the dead? (Please no.) Will Emma be able to cope with her heartbreak and find the strength to become the woman she once was? (Please, God, yes.) Will Robin Hood die this season? Wait, what?

I know you're probably thinking, "What's Robin got to do with anything?", and I don't blame you (because seriously, he was barely on screen in 5A, other than when Regina begged Emma to save his life using dark magic, and that scene was really all about them, not Robin). For someone who's supposed to be Regina's "soulmate" — and was promoted to cast regular for Season 5, no less — they sure haven't spent any time together lately. Sure, sure, there have been bigger issues at hand, but does that next Robin-centric storyline really have to revolve around his death? Isn't that Hook's plot?

Rumors have been circulating online for a while now that Sean Maguire is leaving Once soon, so TV Line asked him about it and he remained coy. "We’re going to the Underworld, so I don’t expect much good stuff is going to happen! But as to where it’s going to lead [for Robin], I can’t say," he said cryptically. "There are obstacles everywhere — a lot of bad people from the past are coming back and they are not too happy with our heroes. If Once Upon a Time was the Star Wars franchise, this would be Empire Strikes Back. It’s going to get dark, it’s going to be scary, and there will be surprises."

I don't necessarily believe him, since we've been sold so many false bills of goods that have turned out to be outright lies (gotta keep the suspense going!), but let's hope that if Maguire is leaving the series, its of his own volition rather than another harebrained idea from the writers to spice things up a bit. I'm not particularly an Outlaw Queen 'shipper, nor do I think that Robin is actually Regina's soulmate or true love. What I do think, however, is that Regina has lost so much already and come so far that to harp on for two seasons about getting them together, only to have them broken up by Robin's death rather than a more poignant end seems cheap and also cruel to Regina.

If Robin Hood and Regina aren't meant to be, why not have Regina realize that her happiness doesn't lie with him and that her fate doesn't have to be dictated by fairy dust and choose to end the relationship? Maybe Robin realizes that Regina's heart really isn't in it and does the noble thing and decides to let her pursue her happiness elsewhere and decides to leave Storybrooke with Roland. There are any number of better options than killing Robin, especially since we've already tried that with Killian but the showrunners seem desperate to hang onto him for dear life, no matter how much we pray they'll just let him go. Robin deserves better, and so does Regina. Come on, guys.