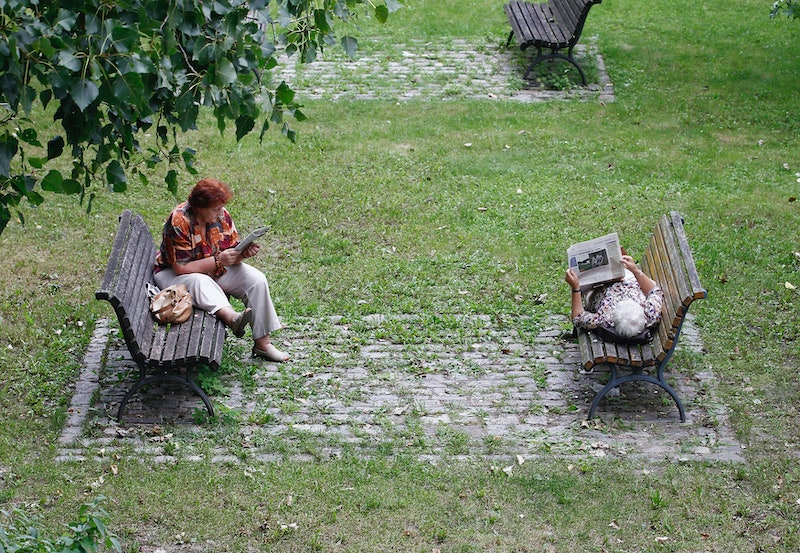 It’s amazing how many world-changing women you still don’t learn about these days. Even with complete access to the Internet — where I hear you can find anything now — some of the world’s most innovative, inspiring, and influential women are lost to the annals of forgotten, mis-remembered, or misattributed history. Or, people just aren’t reading enough books about women who changed the world — and that’s why this list (of books about women you’ve probably never heard of, who changed the world) is here to help you.

I don’t know about you, but I love a good story about a woman who dares to breakdown boundaries, defy all odds, think outside the box, and advocate for herself and her fellow ladies. Sure, she might struggle a little (a lot) but women who change the world always seem to pick themselves up and get back to fighting the good fight. And that’s what I find so inspiring about them. Hopefully you’ll find their stories inspiring too — even if you’ve never heard some of them before.

Here are 14 books about world-changing women you’ve probably never even heard of. Their stories will definitely inspire you to go out and do something great in the world yourself — and then make sure everyone knows about it!

1. On Her Own Ground: The Life and Times of Madam C.J. Walker by A'Lelia Perry Bundles

Born Sarah Breedlove, the later-known Madame C.J. Walker was the first child in her family to grow up outside of slavery, born after the Emancipation Proclamation was signed. In the early 20th century she became the first female self-made millionaire in America, by developing and marketing a line of haircare and beauty products made for black women, and later, opening beauty salons and a cosmetology school. On Her Own Ground: The Life and Times of Madam C.J. Walker tells the story.

In his biography Ada's Algorithm: How Lord Byron's Daughter Ada Lovelace Launched the Digital Age , writer James Essinger states that the world might have had computers almost 200 years earlier, if only Ada Lovelace’s research had been taken seriously by her male peers. Talk about making a difference. The British mathematician is now credited with having written what was the first algorithm intended for machines, and therefore being the world’s first — and long unrecognized — computer programmer. (Side note: Bustle's CMS is named Lovelace after this world-changing woman.)

3. This Child Will Be Great: Memoir of a Remarkable Life by Africa's First Woman President by Ellen Johnson Sirleaf

2011 Nobel Peace Prize winner Ellen Johnson Sirleaf became president of the Republic of Liberia in 2006, and is recognized as the first African female president in modern politics. In her memoir, This Child Will Be Great , Sirleaf tells the story of her unique and inspiring life — from her childhood, through the Liberian civil war, to her presidential election. As a champion of women’s rights, economic equality, and free education, Sirleaf is definitely a woman you should know.

Credited with being the most important woman in Chinese history, Empress Dowager Cixi began as a concubine to the emperor of China. When he died, her 5-year-old son was named emperor, and Cixi quickly took over. During her decades-long leadership of the country, Cixi developed national industries, abolished torture and extreme criminal punishment, and was a relentless advocate for the liberation of China’s women. Read about it all in Jung Chang’s biography: Empress Dowager Cixi: The Concubine Who Launched Modern China .

5. A Woman of Valor: Clara Barton and the Civil War by Stephen B. Oates

Not many people know that before Clara Barton founded the Red Cross, she was really interested in being a Union soldier in the American Civil War. She became a battlefield nurse instead, working to provide medical care to soldiers in the center of some of the most violent battles of the war. A Woman of Valor: Clara Barton and the Civil War tells the story of Barton’s experiences on the front lines of battle, and how that led her to develop the most well-known emergency relief organization in the world.

Not only was Maria Tallchief America’s first prima ballerina, she was also the first Native American to hold the title as well. In Maria Tallchief: America's Prima Ballerina , Tallchief herself tells the story of her life of dance — from beginning at age three to becoming the first star of George Balanchine’s New York City Ballet company, to starring in the famous ballet The Firebird, to transforming The Nutcracker from obscurity to one of the most well-known ballets in the world. A definite must-read for ballet lovers and female athletes alike.

7. The Long Loneliness: The Autobiography of the Legendary Catholic Social Activist by Dorothy Day

The American journalist, social activist, and converted Catholic Dorothy Day began as a suffragette in the early 20th century, and soon after became the co-founder of The Catholic Worker Movement—a movement of faith-based activists who combine direct aid to those in need with direct action and protest. In The Long Loneliness: The Autobiography of the Legendary Catholic Social Activist, Day describes her life of service, protest, civil disobedience, and social activism. She’s kind of the coolest.

8. A Personal Autobiography by Christine Jorgensen

As important now as it was when it was published in 1967, A Personal Autobiography is the story of Christine Jorgensen’s life as an American transgender woman, recognized for becoming the first well-known figure to undergo sexual reassignment surgery — a series of medical procedures she traveled to Europe for, and began in 1951. Upon her return to the United States she became something of an instant celebrity, and used that recognition to advocate for the entire transgender community.

9. Ten Days in a Mad-House by Nellie Bly

Published in 1887, Ten Days in a Mad-House not only made Nellie Bly one of the original immersion journalists, it was also a groundbreaking exposé on the unbearable conditions faced by woman living in mental institutions at the end of the 19th century. After faking her own psychotic break, Bly spent 10 days in the Women's Lunatic Asylum, where she witnessed the injustices committed against patients firsthand. Unrelated fact: she also took a record-breaking trip around the world, completed in just 72 days.

10. One Day, All Children: The Unlikely Triumph Of Teach For America And What I Learned Along The Way by Wendy Kopp

If you’ve ever considered Teach for America in your post-grad plans, you have Wendy Kopp to thank for it. Teach for America was actually Kopp’s undergraduate thesis for Princeton University, and she founded the organization shortly after she graduated. One Day, All Children: The Unlikely Triumph Of Teach For America And What I Learned Along The Way tells a story that many young world-changers face: one of small successes and tons of failures, and what it takes to keep going when you’re trying to make the world a better place.

Another Nobel Peace Prize winner to join this list, Shirin Ebadi is an Iranian lawyer and human rights activist who was, in fact, the first-ever Iranian to receive the Nobel Prize — and the first award winner to have her Prize confiscated by her own government. After years spent working for the rights of Iran’s women, children, and refugees — and particularly survivors of rape — she was forced into exile by the Iranian government in 2009. Iran Awakening is the memoir of her extraordinary life.

12. An American Radical: A Political Prisoner in My Own Country by Susan Rosenberg

After Susan Rosenberg’s journey as a radical political activist and advocate for social justice took a turn for the worse — she assisted in the transport of 740 pounds of dynamite and assorted guns, and was subsequently arrested and sentenced to 58 years in prison — she had a lot of time to thinking about how she went from advocate of peace and justice to a face on the FBI’s Most Wanted list. Her years in prison gave her time to sort all that out, and also to become an activist at the forefront of the prisoner’s rights movement. An American Radical: A Political Prisoner in My Own Country tells the story of that journey.

13. West with the Night by Beryl Markham

Sure, you’ve heard of Amelia Earhart, but are you familiar with the equally badass Beryl Markham? As one of the first bush pilots in Kenya, the British-born Markham is best known for being the first woman to fly solo across the Atlantic from east to west. That adventure, and other amazing tales, are chronicled in her memoir West with the Night . You definitely want to check it out.

14. Martha Matilda Harper and the American Dream: How One Woman Changed the Face of Modern Business by Jane R. Plitt

If you don’t already think of Martha Matilda Harper every time you sit back in that Aveda shampoo station, you will after reading this biography. Martha Matilda Harper and the American Dream: How One Woman Changed the Face of Modern Business tells the story of none other than Martha Matilda Harper — a businesswoman and entrepreneur who is responsible for establishing America's first retail franchise network (salons), a move that inspired women all over the country and the world to go into business for themselves, rather than relying on the then-status-quo of being financially dependent on men. You go girl.