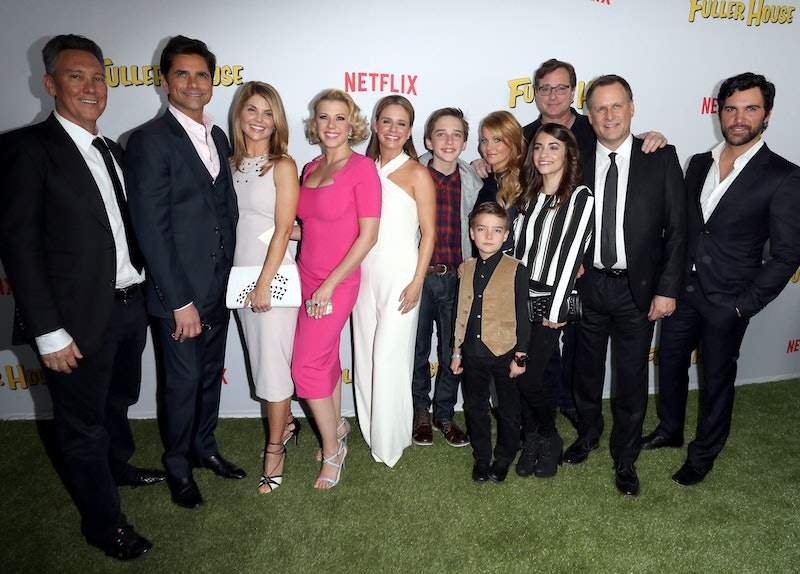 It’s been 29 years since Full House first premiered on September 22, 1987. And, nearly three decades later, lifelong fans are gearing up for the Tanner/Katsopolis/Gladstone (and now Fuller) clan to get back under one, very full, roof. Fuller House’s 13-episode first season will hit Netflix on Feb. 26, and, while the house and characters are the same, everyone seems to have grown up. So, how old is the Fuller House cast now?

In the trailer for the Netflix reboot, Jesse (John Stamos) jokes that the cast all still looks pretty good. No argument there. It’s been 21 years since the finale episode in 1995 and fans are not having any trouble recognizing of our favorite ‘90s family in 2016. But, time has definitely passed for the characters and the actors. The girls, and the actresses who played them, are all grown up now. And, the women are ready to manage a full house of their very own.

With the story set 29 years since the pilot episode (aka present time), how old are the characters going to be on Fuller House? And, will the cast be acting their age? Here’s how old the Full House actors — and characters — are on Netflix’s Fuller House.

When the show started, John Stamos (born 1963) was 24 years old. Uncle Jesse may actually be one year older than Stamos because Jesse turned 26 in the Season 2 episode, “I’m There For You Babe,” where everyone wants something from him — give the beautiful man a break, jeez! If Jesse was 24 or 25 in the pilot, he would 53 or 54 on Fuller House. John Stamos, however, turns 53 in August, have mercy!

According to Danny Tanner’s Full House wiki page, Danny was 30 (born 1957) when the show commenced. There is even an early season one episode confirming Danny’s age, as he turns 30 in, “The Big 3-0.” Bob Saget (born 1956) was 31, close to the age of his character. That would make Danny 59 in the Netflix series. Bob Saget is still 59 IRL, with his 60th birthday waiting just around the bend in May.

Joey and Danny were childhood friends who graduated together. So, that would make them both 30 at the commencement of the series. This would make Joey 59 in the Netflix reboot as well. Though Dave Coulier is 2 years younger than his character in real life, he was 28 when the show premiered and will turn 57 later in 2016.

Donna Jo was a responsible fifth grader when we met her in 1987. And, the show lasted eight seasons, following D.J. through her 18th birthday and senior year. Candace Cameron Bure was about the same age as D.J. in real life, and was 11 at the beginning of the series. D.J. is now a 39-year-old mother of three on Fuller House. And, in real life, Bure is a 39-year-old mother of three.

When the show began, both Jodie Sweetin and her character, Stephanie, were five years old, according to her Full House wiki page. But, it’s been a long time since Kindergarten. Both Stephanie and Jodie are 34 in 2016.

While Michelle will not be in the series, because she is taking the New York fashion world by storm, it should be noted that the Olsen twins were a little more than a year old when the show began. Mary-Kate and Ashley Olsen, born June 13, 1986, (and Michelle Tanner) will turn 30 this year. Woah.

All in all, the cast has grown at the same rate as their characters, which will make their portrayals, even three decades later, just as authentic as you remember.