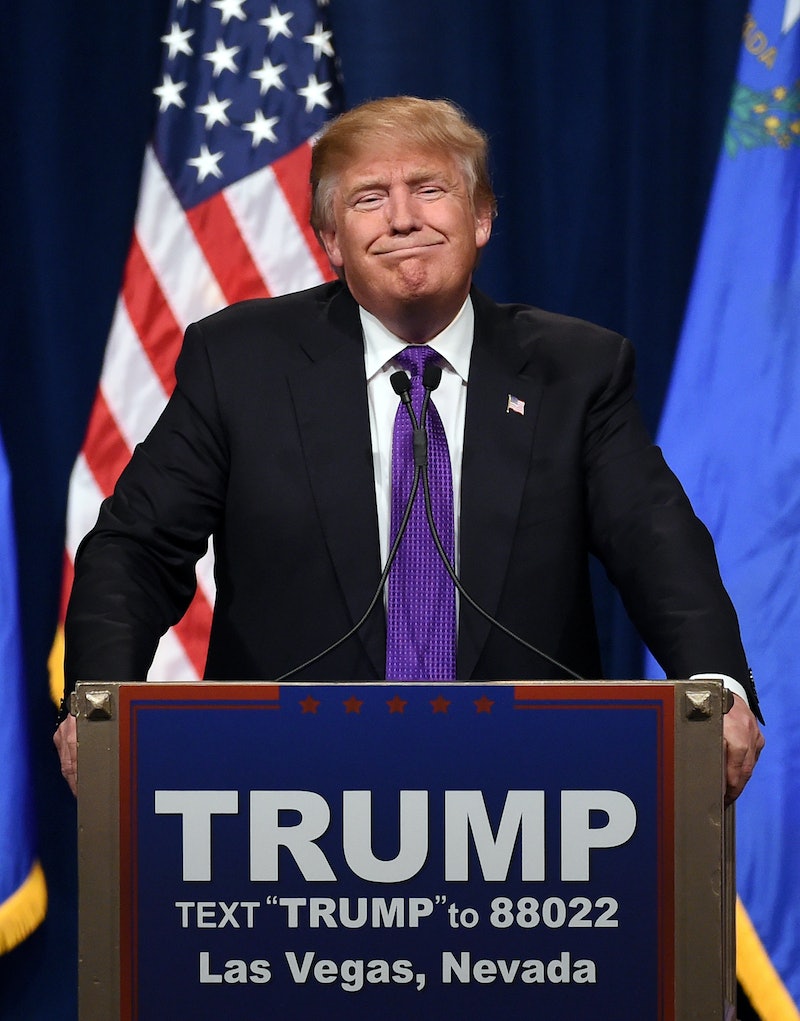 Once again, Donald Trump asserted his dominance over the Republican field of candidates on Tuesday, scoring a "yuge" win in the Nevada caucus. Trump ended the night with 45.9 percent of the vote, blowing away second-place Marco Rubio, who garnered only 23.9 percent of the state. Finishing third was Ted Cruz, the only Republican yet to win a state election besides Trump. He came close to overtaking Rubio, with 21.4 percent of Nevadans' support, but ultimately couldn't make that cut. Rounding out the field were Ben Carson and John Kasich, with 4.8 percent and 3.6 percent respectively, earning each of them a paltry single delegate. With this latest win, Trump's frontrunner status is more solid than ever, and Nevada could be a microcosm reflecting Trump's future outcome on Super Tuesday.

Trump's generous margin of victory with Latinos — he got 44 percent of their vote, compared to runner-up Marco Rubio's 29 percent — is a gamechanger for the GOP. Super Tuesday will represent a good chunk of Latino voters, especially in Texas, Oklahoma, and Virginia, which have relatively high Hispanic populations. Right now, Cruz is leading the polls in his home state of Texas — but not by an insurmountable margin, especially for a populist candidate like Trump. The business mogul could still finesse a win. Plus, the state isn't winner-take-all, so if the race is close, a second-place finish for Trump could still mean getting a decent portion of Texas's 193 delegates.

Nevada caucus-goers also indicated that they are looking for an anti-establishment candidate to shake up the Republican Party. Sixty-one percent of voters said that they would rather have a political outsider than an experienced politician as the next president. Of that 61 percent, 70 percent said that the outsider they wanted was Trump. Nationally, about 58 percent of Republicans would prefer a political outsider, meaning the same wave of anti-establishment sentiment that carried Trump to the top of the leader board in Nevada should bring him victory on Super Tuesday.

Trump's victory on March 1 is nearly assured, as no one has provided a significant challenge for him since the heavily evangelical state of Iowa selected Ted Cruz as its preferred candidate. Cruz has the opportunity to win over the religious right in Georgia, Alabama, and Arkansas, but even in those Bible Belt states, Trump currently has the advantage. It's not over until the fat delegate sings, but with each passing primary, Trump appears to have the nomination locked up more and more. Super Tuesday should make or break that assumption.