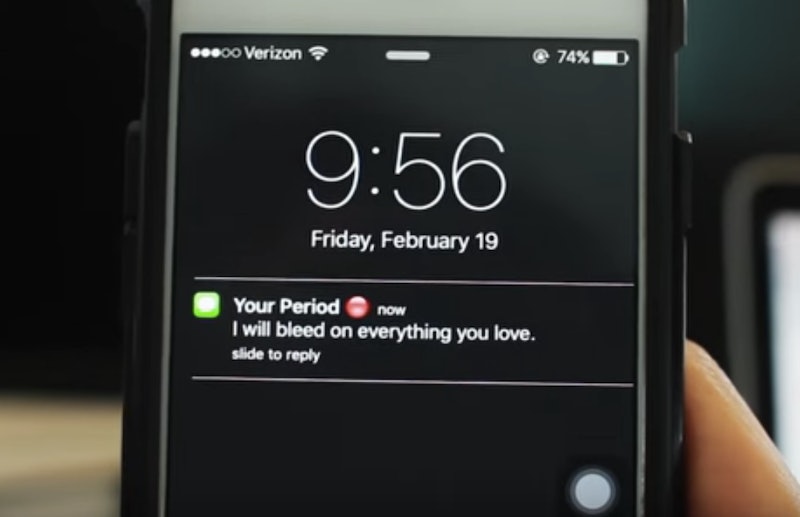 The only thing more annoying than your period? The idea of your period sending you texts. It wouldn't be too far fetched — since the good ol' days of middle school, we've been personifying our periods. Aunt Flo, Cousin Red, The Actual Devil, you know, the basics. Though the gender bias behind the semantics of how we refer to one of our most natural (and arguably, most significant) life-bearing, spirit-cleansing, nature-driven human functions is bleak at best, many women have in a way reclaimed their period as a source of pride and empowerment. Be that as it may, that doesn't mean it sucks any less. It still sucks. It is the suckiest of the sucky things. It will destroy your life for three days before it even arrives and you probably won't even know what's going on. It's painful and weird and necessary, and we as womankind can relate to one another on this front.

Thankfully, in an (admittedly) hilarious way to commoditize Auntie Flo Flo even more, the mad geniuses over at BuzzFeed created a video of all the rude sh*t your period would text you if it were an actual person. You know, things along the lines of: "Hey, remember that cute dog? Let's cry about him." "Lol, cute new panties! It would be terrible if something happened to them." And the most evil of all: "See you next month... or will I? *Baby emoji*" The funniest part of it all is that these are essentially the thoughts that are already going on in our minds... now, laid out before us in the form of an iPhone exchange (as all good things are).

Periods take no mercy on favorite comforters, pants, significant others...

No woman would dare judge another woman on the state of her panties.

We all know, we all get it. There are weird stains and marks on them because pantyliners are annoying at best and sometimes unhealthy at worst (also we're just lazy).

This is basically what goes on in the mind of a woman having cravings.

She will not stop. It will never stop. It will not even slightly toe the breaks until you consume at least four of those things, at which point it will only want more. *Cries*

OK this actually isn't even funny though.

It doesn't matter if you're on birth control, use condoms religiously, have an IUD, are with a partner who is infertile, or, uh, don't even have sex at all. I have never known a woman who hasn't, at one point or another, had an irrational breakdown about potentially being pregnant out of nowhere (toilet seat theory, A POOL WITH SPERM IN IT?).

Check out the full, gruesome video here. Incredible how just a few animated texts can make you re-live all of your biological, instinctual angst. #Raw.