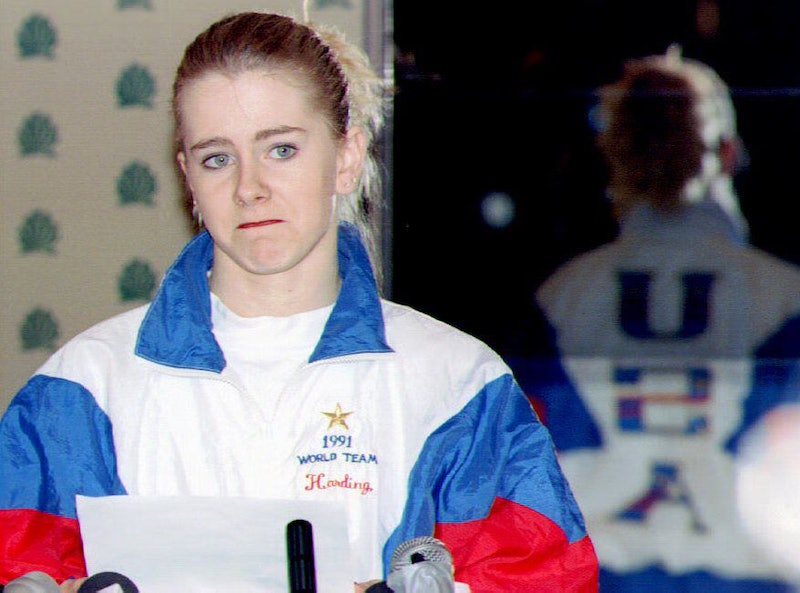 The year 2016 will mark an interesting 25th anniversary in the world of U.S. figure skating, with the upcoming Winter Olympics in South Korea still more than two years away. I'm talking how in 1991, Tonya Harding became the first American woman to successfully execute a triple axel in competition. But what happened to Tonya Harding after that career year was what she'd ultimately go down in history for ― so much so that it's obscured virtually everything else about her.

In case you're not a figure skating fan, or weren't around to witness the incredible media circus that unfolded in 1994, here's the gist: Harding's ex-husband, formerly named Jeff Gillooly, along with her then-bodyguard Shawn Eckhardt, allegedly arranged for an attacker to take out one of Harding's chief rivals, Nancy Kerrigan, clubbing her leg with a metal baton as she was exiting a practice in Detroit, Michigan. The attack took place just weeks prior to the start of the 1994 Winter Olympics in Lillehammer, Norway.

Harding insisted that she had no prior knowledge of the attack, and she never faced charges as such, but she ultimately plead guilty to conspiring to hinder the prosecution of the actual attackers, earning her three years of probation and a lifetime ban from the U.S. Figure Skating Association.

So what has happened to Harding since? Obviously, nobody is privy to all the intricacies of her personal life but her, and that's important. Personal privacy, to whatever extent you can get it after such a high-profile negative incident, can be a vital and necessary refuge.

But it's been a long and slightly strange road for Harding's public life. At the conclusion of her skating career, Harding had twice competed in the Olympics at the highest level ― she finished 4th in 1992 and 8th in 1994, competing in a field alongside Kerrigan just over a month after the attack ― and won a pair of U.S. Figure Skating Championships (although the latter win was revoked as a punishment). She was just 23 years old at the time, and with her skating career over, she ultimately turned turned to a very different athletic endeavor: boxing.

It started out with an appearance on one of the most infamously bad TV shows of the time: FOX's Celebrity Boxing. It was an experiment in tasteless prize-fighting that lasted all of two episodes. The series featured bouts such as the razor-thin 7-7, 200-pound former NBA player Manute Bol squaring off against 330-pound former NFL lineman William Perry, Diff'rent Strokes actor Todd Bridges against Vanilla Ice, and perhaps most notably, Harding stepping into the ring against Paula Jones.

It wasn't much of a fight, much less good television. But it did presage Harding's move into the world of, let's say, more legitimate boxing. She ended up fighting six professional bouts over her career, from 2003 to 2004, amassing a 3-3 record, as well as one more celebrity pseudo-match against comedian Doug Stanhope, which she won.

Harding also spent years as a commentator on the TruTV television show The Smoking Gun Presents: World's Dumbest ... in which several comedians and low-level celebrities, like Harding, Danny Bonaduce, Daniel Baldwin, and Gary Busey (all of whom have had some sort of legal issues) provided commentary over videos that ranged from dumb criminals to dumb brawlers to dumb drivers ... you get the gist.

Years later, Harding's name would briefly resurface in the world of political news thanks to an offhand remark by then-Senator Barack Obama during his 2007 primary campaign in Iowa. He joked that people didn't think he could beat Democratic frontrunner Hillary Clinton unless "he goes and kneecaps the person ahead of us, does a Tonya Harding." Harding was none too pleased by the remark, as she voiced to Bernie Goldberg in 2009 on HBO's Real Sports with Bryant Gumbel.

Harding got married to Jeff Price in 2011, and gave birth to her first child. There's also one other very interesting facet to her competitive life that bears mentioning, however. In 2009, she reportedly set a record top speed in a vintage 1931 Ford while racing on the Bonneville Salt Flats. It seems her competitive streak still runs deep.