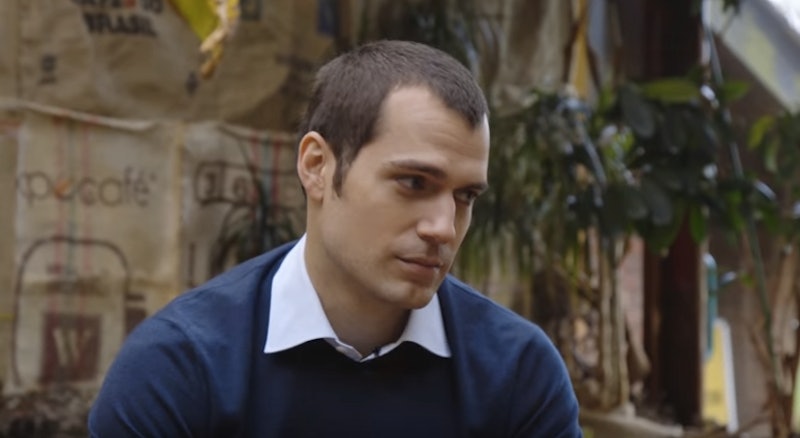 I don't know who it was, but one of you has definitely been talking about my weak spots with Henry Cavill, because he just cashed in on them in a big way. Cavill asked children to choose between Batman and Superman, which is basically a failsafe way to make me a little melty in front of my computer for the next couple of hours at least. I couldn't handle it when Tom Hiddleston did it in that commercial as Loki, and I can't handle it when Henry Cavill does it with these kids, even though he's out of costume. Or maybe even especially because he's out of costume? I don't know. Something about Cavill's casual outfit and devastating British accent just screams "dad material" to me, and my ovaries can't help but squawk back in appreciation.

But anyway, to promote Batman v Superman: Dawn of Justice , in which he plays, well, Superman, Cavill sits down with some very opinionated kids to find out which of the two superheroes they prefer right off the bat, sight unseen. Oh, and as if that wasn't already adorable enough, they're also trying to drum up entries to a contest to join Cavill, Ben Affleck, and Jesse Eisenberg at the premiere, the proceeds of which go to benefit three causes: the Eastern Congo Initiative, Seed Project, and Durrell Wildlife Park. They are really not messing around, or letting themselves get out-heart-warmed by anyone else on the Internet, that's for sure.

It would be no fun if all the kids chose Superman, of course, and, true to form, some of them have a definite preference for Batman. Which is almost more satisfying, because it means we get to see Cavill playfully tease Batman for his shortcomings, namely his inability to fly unless he's already falling down and his lack of any and all superpowers. All while handing out high fives to the kids who give him the answer he wants. Just take a look at this big pile of cute

Hoo baby. Not to look a gift horse in the mouth, but is it too much to ask to get Ben Affleck in the next one, so the two of them can vie for the affections of these kids right in front of our very eyes? Actually no, don't answer that. There's no way I would make it through that video without passing out, so it would almost certainly be wasted on me. As would meeting them in person (I would be unconscious), so someone else please apply in my stead.