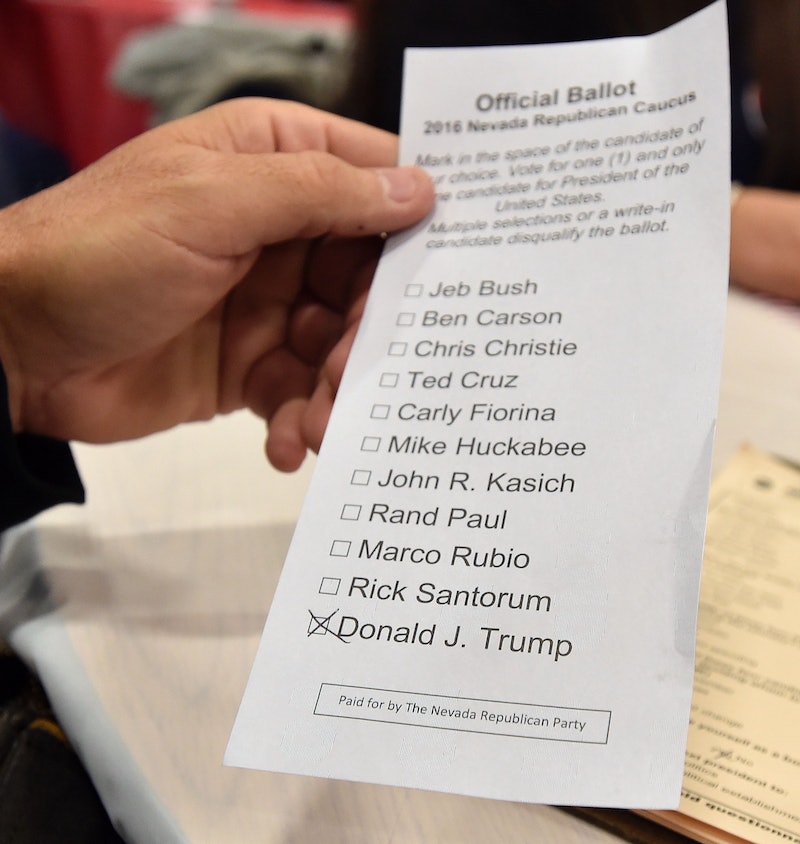 Super Tuesday, the biggest day of primary season, is coming up next week, and voters across the country from Alabama to Alaska are preparing to punch some ballots in support of their favorite candidates. Of the 11 states that will vote on Tuesday, eight have an open primary system and three use the closed primary system. But what's the difference between an open and closed primary? The distinction simply changes which party's primary registered voters are allowed to vote in.

An open primary allows any registered voter to cast her ballot in either party's primary, while a closed primary mandates that voters registered with a party vote in that party's primary. For example, I am a registered Democrat in Texas, which has an open primary system, so I can choose to vote in the Democrat or Republican primary. However, if I was voting in New York, which features the closed primary system, I would have to vote in the Democratic primary.

The rationale behind closed primaries is that voters can skew the results of an open primary by voting for the weakest candidates in their opposing party. Imagine if a ton of Texas Democrats went down to the local polling location, and voted for John Kasich in the Republican primary. He wins the election and takes the majority of Texas' 155 delegates, making it harder for the frontrunner Donald Trump to gain the party's nomination at the convention in July. It's a contentious concept that's been heavily debated in the past — the U.S. Court of Appeals for the Fourth Circuit actually ruled that the open primary system in Virginia was unconstitutional because of "the severe burden placed upon a political party when it is forced to associate with those who may not share its views."

However, states don't adhere to the strict open/closed binary — there are a lot of variations on the rules state by state. Many states favor a mixed primary, in which there is simply an extra provision for those who are registered with a third party or not affiliated with any party at all. In Massachusetts, independent voters can cast a vote in either primary, but for voters registered either Democrat or Republican, closed primary rules apply. Georgia features an open primary, but if there is a runoff election, voters must stick with the party they voted with in the first round. Each state chooses to handle its election differently in order to most fairly represent voters.

Open primary versus closed primary doesn't make too much of a difference in the end — fringe candidates may see slightly higher support in open primary states, but it rarely amounts to a significant change in the race. However, as Super Tuesday comes up, it's still a good feeling to know the difference.