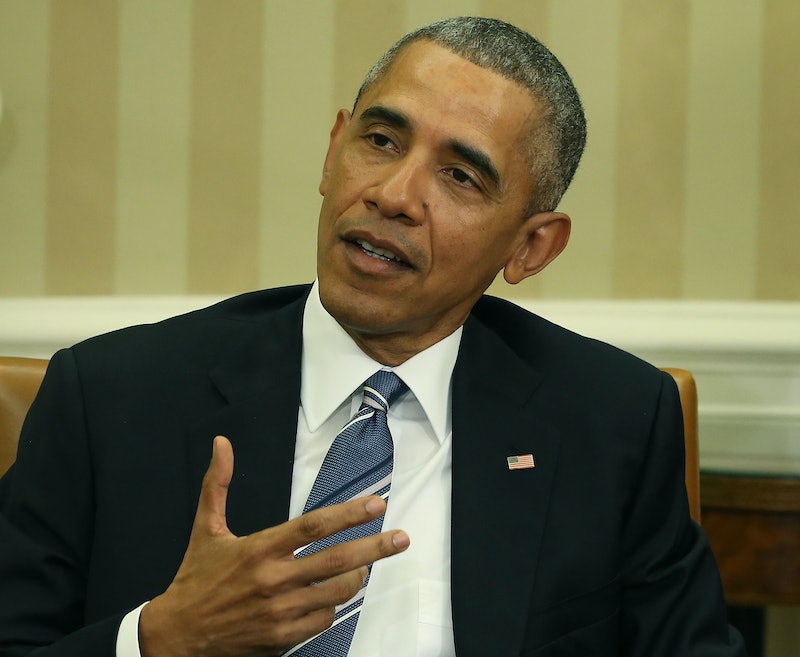 Since Supreme Court Justice Antonin Scalia's unexpected death on Feb. 13, Republicans and Democrats have been sparring over whether President Barack Obama should select a new justice to fill his seat or if the decision should be left to the next POTUS. But Obama has remained steadfast in his decision to select a nominee to put before the Republican-controlled Senate, which has said it will refuse to hold a hearing for any nominee of Obama's. In a guest post on SCOTUSblog on Wednesday, Obama explained what he's looking for in a nominee.

Obama didn't indicate any specific issues that would serve as a litmus test for his nominees. His post took a bipartisan tack. He said he would consult with "members of both political parties, and people across the political spectrum." The first string of criteria he gave are all fairly run-of-the-mill: "the person I appoint will be eminently qualified. He or she will have an independent mind, rigorous intellect, impeccable credentials, and a record of excellence and integrity." Nothing surprising there.

But the second list of qualifications seems a bit more tailored to the contentious political climate of the times:

Second, the person I appoint will be someone who recognizes the limits of the judiciary’s role; who understands that a judge’s job is to interpret the law, not make the law. I seek judges who approach decisions without any particular ideology or agenda, but rather a commitment to impartial justice, a respect for precedent, and a determination to faithfully apply the law to the facts at hand.

Obama is almost certainly looking to avoid the protests he received over the nominations of Sonia Sotomayor and Elena Kagan in 2009. Though they both went on to be confirmed — Sotomayor in 2009 and Kagan in 2010 — Republicans expressed concerns that they were "activist judges" who "legislate from the bench." Such criticisms would make it easier for Republicans to keep their vow to not hold a hearing for, or even meet with, any of Obama's nominees now. Though Sen. Majority Leader Mitch McConnell expressed this unwillingness on the very day of Scalia's death, a closed-door meeting of Senate Republicans on Tuesday made it a bit more official.

Where do Americans weigh in on this? Greg Sargent at The Washington Post broke down four opinion polls for us. Two show only about one-third of Americans agreeing that the nomination should wait for the next president, with a majority saying that Obama should move on it this year. Two others show those polled to be split almost evenly on the matter. Sargent suggests an explanation: In the two polls that show a majority in favor of Obama putting forward a nominee, the wording of the questions provided people with the arguments on either side (the responsibility to act quickly versus the fact that it's late in Obama's term).

If the Republican Party's base puts pressure on its representatives to do their jobs in 2016, then it might be difficult for Senate Republicans to maintain their refusal. In the upcoming election on Nov. 8, Republicans have 24 seats to defend in the Senate, according to Ballotpedia, and Democrats would regain control of the Senate if they take at least five of those (assuming none of their own incumbents lose their seats). If Obama selects a moderate nominee, as his post on SCOTUSblog indicates he may, he'll be adding pressure on the Senate to act.