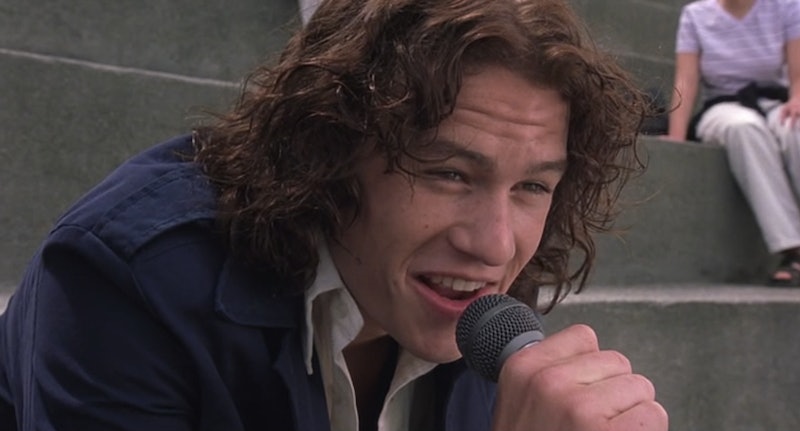 The '90s were a completely different time from the world in which we now live. Those are undeniable facts. But there are just some movies that are completely timeless, for various reasons, really. See, 10 Things I Hate About You is actually the greatest teen movie of all time, or at least the greatest of the 1999 set. That said, it makes my heart heavy to admit that sometimes 10 Things I Hate About You doesn’t make any sense . I know, I know. I'm a huge fan of the movie, too. I watch it all the time, and I still laugh at all the jokes. But I decided to collect all of the most absurd moments in the Taming of the Shrew update, because, seriously, there are a lot of them.

To recap, tempestuous Kat and preciously popular Bianca Stratford are barred from dating. This is much to the chagrin of supercreep Joey Donner and adorable new kid Cameron (Baby Joseph Gordon-Levitt, what up?) who both want to date Bianca... with different intent. Anyway, a new rule is set in motion, stating that Bianca can date when Kat dates, so Cameron uses Joey as a pawn to pay the scary/hot Patrick Verona to take Kat out (aaaaand exhale). Kat proves to be not-so-easy to court, and Patrick seems to be genuinely falling for her. What will happen next?

I mean, you know what happens next, we’re in touch with the genre. So without delay, here are 28 delightfully absurd things from 10 Things I Hate About You.

I'm somehow more concerned that she's typing this on a word doc with her last name as the title, what's with that?

2. How Is "Cowboys" A Subculture I Missed In High School?

I get that you usually have the preps, the goths, the nerds, but, like, I never spotted anyone with a lasso.

3. "Yeah, But See, There's A Difference Between Like And Love. Because I Like My Skechers, But I Love My Prada Backpack."

The depth in this one is like... puddle level.

4. "But The Next Time You Storm The P.T.A., Crusading For Better Lunch Meat Or Whatever It Is You White Girls Complain About, Ask Them Why They Can't Buy A Book Written By A Black Man!"

I can practically feel it from here.

Kat and Bianca's father is so worried about them getting knocked up that he forgets to mention that maybe you shouldn't sit on top of a moving car.

Although incidentally it doesn't make sense that they'd all line up for a reaction since Michael asked them as a group if they wanted to date her. Weird?

8. JGL's Shirt Is About Six Times Too Big Here

That is because he is basically an infant in this movie.

9. Also It Looks Like He's Wearing A T-Shirt For A Chinese Place In This Scene...?

I love Chinese food, too, but clearly not as much as this guy.

10. How Big Is This High School, Honestly?

Except those are the most bland, least sexual black panties in the world so who knows.

12. Did Patrick Laminate His Pants Before He Went To The Club, OMG

They are so shiny.

So does Patrick like... secretly frequent this place on the sly, to the point where him and the bartender are on a first name (last name?) basis?

14. It Just Seems Like He Would Stick Out Because This Club Is Just Fueled On Estrogen

Um, it actually is Nigel with the brie (but, you know, with everyone else in school behind him).

16. There's A Basically A Waiter Serving Tequila Shots At This Party

This party has everything.

18. Also These Two Showed Up At A High School Party In Suits

They're, like, one more pastel away from going full Miami Vice.

That's not how we try to kiss people.

20. God, I Love The Part When Patrick Pole Dances To Win Kat's Love

JkJK look at his smile during this football field serenade.

It is resoundingly clear that I am going to die alone.

Kat's entire plan to break Patrick out of detention involves her hitting on her soccer coach, so that's neat.

22. Also, At What Point Did They Take To These Weird Pedal Boats?

Is that their getaway car?

24. Is Cameron Still Using The Text Book With The Hole In It?

God, the budget cuts at this school must really be bad.

Uhhhhh, I'm pretty sure that's actually just a crop top and tulle skirt from Candie's Carrie Bradshaw-inspired collection but whatever.

26. Save Ferris At This Prom, Though

The Donnas must have been busy playing school dances at every other teen movie from 1999.

27. The Fact That Patrick Managed To Get Letters To Cleo To Play To Make Kat Happy

28. Kat's Actual Poem, Which Is A Glorified, Gifless Listicle, Not A Sonnet, And Actually Names 14 Things She Hates About Patrick

It deserves a B-.

OK, B, because she ran out of the room crying.

All poems and fashion mishaps aside, it's clear that 10 Things I Hate About You wins all the superlatives in the Class of '99. I mean, duh.