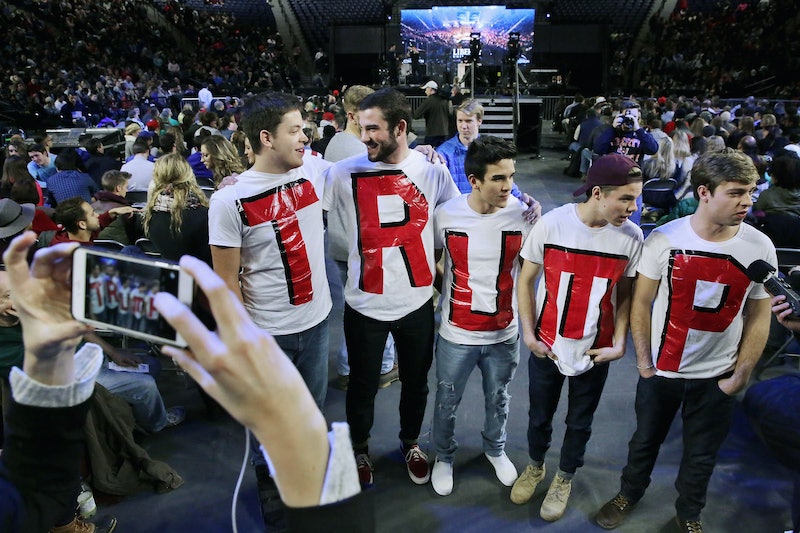 Seeking to cash in on the rise of for-profit educational institutions, Donald Trump once promised students of his Trump University "world-class success" through a school that offered no college credit or degrees. Students there reportedly paid up to $35,000 (a price tag that could have just as easily gotten them an actual college degree). Instead of learning in classrooms, those enrolled in Trump's for-profit school were taught about real estate in hotel ballrooms. These workshops pitched Trump's own products while promising to make the students wealthy themselves. So what exactly was Trump University? The Donald is facing a lawsuit regarding its practices.

Though the education company has since changed its name to The Trump Entrepreneur Initiative, its merits have been (even more) in question since it was sued by the state of New York in 2013. The state's lawsuit alleged that the university was carrying out illegal business practices, and operating under false promises which left students thousands of dollars in debt. New York Attorney General Eric Schneiderman accused The Trump Organization and Trump personally of shilling to the some 5,000 people enrolled across the country. Trump denied any wrongdoing.

According to a report by the American Media Institute, Trump said that he originally learned the same practices taught in his workshops. In his 2013 deposition in the lawsuit, Trump defended the courses from students who alleged they were unable to make money off of them, saying, "I did. I made a million dollars or more, unlike a lot of instructors that teach real estate and never made 10 cents."

The GOP frontrunner appeared in advertisements for the school, claiming that he had handpicked its instructors and personally created the curriculum. The lawsuit found this to be completely false. Trump later admitted that he had no part in choosing the teachers or building the curriculum.

The supposed world-renowned instructors never seemed to make it to class, either. According a recent civil lawsuit brought against the university, the real estate lessons were often no more than an upsell, marketed at convincing prospective and enrolled students to join the next class level for an additional cost. For instance, the lawsuit claims that the first seminar was free, but designed to be followed up by another course which cost almost $1,500. A personal mentorship with a real estate elite (kind of like the ones college students can get for free in their professors) cost Trump University students $35,000 per course.

The 2013 lawsuit stripped the institution of the "university" in its name, and in 2014, a New York judge found Trump personally liable in the school's violation of state education laws. For their part, Trump and his people have continued to defend the school and its practices. According to CBS News, Alan Garten, the executive vice president and general counsel of The Trump Organization, has said of the school: "We provided students with valuable resources, with online instructions, with in-person training. Mentoring, seminars. Substantive curriculum. And the vast majority of students, almost all the students, got their money's worth and were satisfied."

A civil lawsuit against Trump University is slated to have its final pretrial in early May. Last week, lawyers on both sides of the suit named Trump in their list of witnesses, meaning the businessman will more than likely have to appear on the stand. And the trial could take a while; 72 people have been called upon as potential witnesses. This could throw a wrench in Trump's presidential campaign, as the GOP will hold their final primary elections throughout May and early June.

A missed opportunity to campaign combined with this extra scrutiny over the university (which he has avoided during his run for the presidency), could land Trump and his team in hot water. It will be interesting to see if Trump University ends up having an effect on Trump's heretofore unstoppable campaign when it comes time for the GOP presidential nomination.