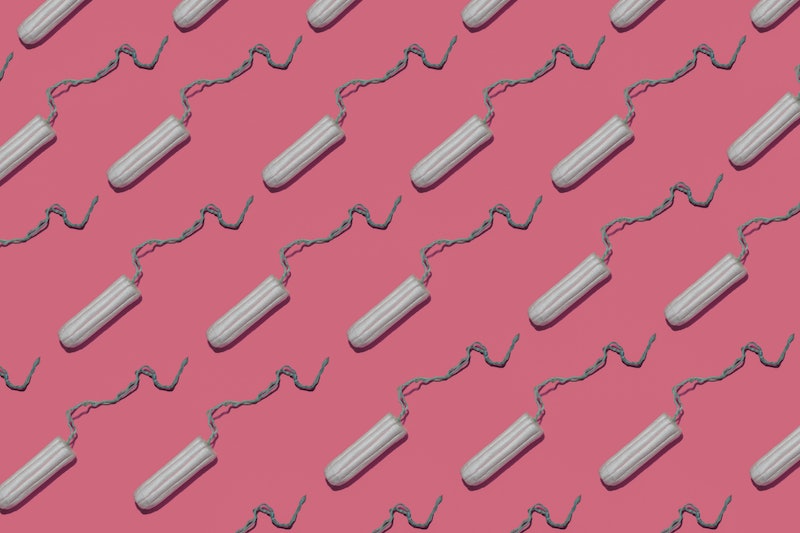 Every once in a while, we hear stories about people who become gravely ill, lose limbs, or even die from toxic shock syndrome (TSS), a condition often associated with tampon use. If you’re someone who prefers tampons to other menstrual supplies, it’s easy to freak out about it. Take a deep breath: there’s no need to panic. There are a lot of myths about toxic shock syndrome,

First things first: Toxic shock syndrome is a serious bacterial infection, associated historically with tampon use, though it can be contracted in a variety of other ways. "It is a serious and potentially life-threatening condition, but fortunately rare," Dr. Felice Gersh M.D., an OB-GYN, tells Bustle. In most cases, people with TSS will need to be hospitalized and closely monitored.

Although TSS shouldn’t be taken lightly, it’s not the terrifying monster under your bed either. You shouldn’t worry about it, nor should you let the myths surrounding it prevent you from living the life you want to lead. By learning the facts about TSS — including how best to prevent it — you can keep using tampons to your heart’s content. And the best place to start is by throwing these misconceptions about TSS out the door.

Dr. Owen Montgomery, M.D., chairman of the Department of Obstetrics & Gynecology at Drexel University College of Medicine in Philadelphia, Pennsylvania, told Cosmopolitan in 2015 that one issue is that, when a tampon is left inside the vagina for way too long, it becomes a “welcoming environment for bacteria to flourish.”

TSS was more common in the era of extra high-absorbency tampons, which are now no longer available. The synthetic fibers in these tampons, Dr. Gersh tells Bustle, made them excellent breeding grounds for Staphylococcus aureus. Today's tampons are far less likely to induce TSS, according to the Center for Disease Control and Prevention (CDC).

2. "It's Only Associated With Tampon Use"

According to the U.S. National Library of Medicine, fewer than half of TSS cases involve tampons. TSS can also be linked to burns, skin infections (even with something as small as an infected insect bite), and surgical incisions. To get TSS, a person has to have Staphylococcus aureus or Streptococcus pyogenes; these bacteria have to grow and release toxic products; and those toxins have to get into the blood. That process does not require menstruation or tampons to be involved.

It’s also important to note that tampons aren’t the only objects associated with TSS — any device inserted into the vagina carries a risk. That includes contraceptive sponges and diaphragms, as well as menstrual cups.

Because TSS can occur in response to many conditions that cause overgrowth of bacteria, it's not confined to menstruating people. Around half of TSS cases affect period-havers, according to research published in Clinical Infectious Diseases in 2001. The other half occur in children, men, and post-menopausal women.

Given how frequently people mention TSS in relation to tampons, you might think that TSS is easy to get, or that a lot of tampon users get it. That’s false.

Statistics suggest that only around three of every 100,000 women are diagnosed with TSS — that’s about .003%. "Fewer than 20,000 cases are diagnosed annually," Dr. Gersh says, which is less than one in a million people in the U.S. And while TSS is a very serious illness for people who do get it, it’s also not as fatal as you might think. The most common variety, TSS from Staphylococcus aureus, has a fatality rate of less than 3%.

5. "Leaving A Tampon In Too Long Definitely Means You'll Get TSS"

Leaving a tampon inside your vagina for more than eight hours is a risk factor for TSS. But even in cases in which people leave tampons in for too long, TSS is still very rare. According to the UK's National Health Service, most of the time when a person forgets about a tampon for an extended period, they'll experience other problems, like a discharge and smell, but no infections.

You might think that menstruation-related TSS would cause pain in your abdomen, but actually the symptoms of TSS are quite different from something like PMS. Dr. Gersh says the symptoms of TSS are those of septic shock. "Symptoms include a high fever, low blood pressure, nausea and vomiting, confusion and seizures," she says. People can also experience muscle aches, and a rash like sunburn on the palms and the soles of the feet.

If you’re suddenly experiencing these symptoms, seek medical attention ASAP, especially if you’ve been using tampons or other vaginal insertion devices, or you have an infected skin lesion or surgical incision.

Want to keep using tampons? Go ahead — just make sure you take some basic precautions and use them correctly. "Leaving tampons and menstrual cups out at night may help lower risk," Dr. Gersh says. "Not leaving them in for more than a few hours at a time is also recommended." Use the lowest absorbency tampon you can for your cycle, and wash your hands before and after inserting a tampon or menstrual cup to avoid spreading bacteria. Sterilizing your cup regularly is also a key part of menstrual hygiene. And if you notice any signs that anything's amiss, it's a good idea to check in with your doctor or OB-GYN; chances are it's something else entirely.