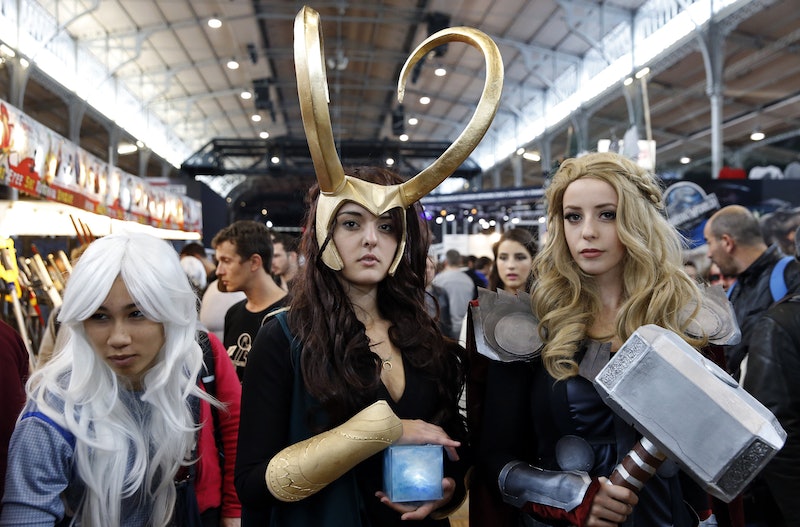 The word “nerd” has changed a lot in the last few years, evolving from a derogatory term meant to skewer uncool or out-of-touch individuals to a more value-neutral (and sometimes even positive) descriptor of a certain type of media consumer. These days, nerds come in all varieties: Science nerds, music nerds, comedy nerds, theatre nerds, history nerds, fantasy nerds, fashion nerds, word nerds — basically, if you can love it, you can nerd it. But where did “nerd” come from?

Although it’s now a widely used term — and one you may even apply to yourself — the origins of the word “nerd” are more mysterious than you might think. “Nerd” entered the lexicon in the early 1950s. According to the Oxford English Dictionary , the first known published use of “nerd” was in a 1951 article in Newsweek, which declared, “In Detroit, someone who once would be called a drip or a square is now, regrettably, a nerd.” The term then made its way into other publications; linguist Ben Zimmer reports that William Morris, an influential lexicographer, included “nerd” in his “Real Gone Lexicon,” a guide to teen slang, in 1954. Morris defined the word as “a square, one who is not up with the times.”

But though we know when “nerd” took hold, where the word came from is a fuzzier matter. One of the most compelling theories is that “nerd” originated with Dr. Seuss. In Seuss's 1950 children’s book If I Ran the Zoo, the narrator declares that if he ran the zoo, he would “sail to Ka-Troo” and collect “a Nerkle, a Nerd and a Seersucker, too!” But while we know for sure that Seuss used the word “nerd,” it’s still not clear how his usage would have entered into teen slang. As Zimmer points out, it doesn’t really make sense that teens of the 1950s would see “nerd” among all of the other silly words in Seuss’s work and pick that one to use, and the grumpy, furry Nerd depicted in Seuss’s book (see the illustration above) doesn’t line up with the slang meaning of “nerd” as “a square” (aka, a brainy, socially awkward type). Furthermore, why would teens be reading Dr. Seuss? We know that “nerd” was a part of teen slang by 1951 — only a year after Seuss used the word, which seems to rule out the theory that teens could have picked up the term while reading Seuss as children, and then adopted it in adolescence.

Other theories about the origins of the word “nerd” are even more tenuous. Some have suggested that the term may be a play on the word “turd,” or a variation of “drunk” spelled backward (the idea being that a nerd is the opposite of a drunk partier), but the Oxford English Dictionary points out that these ideas don’t account for the spelling of “nerd”. If people wanted to evoke the word “turd,” why wouldn’t they spell it “nurd”? And “drunk” backward would be “knurd,” so, again, how do we get to “nerd”? Actor Simon Pegg has said that “nerd” is a shortening of “ne’er-do-well,” but Zimmer argues that there’s no evidence for this, and that, at any rate, the meaning of “ne’er-do-well” — a rogue, or a lazy person — seems an odd ancestor for the buttoned-up, over-analytical “nerd” character.

Jim Burrows, who has a whole website devoted to the word “nerd,” presents another theory, which suggests that “nerd” comes from an acronym. Northern Electric in Ottawa created a research and development lab, called Northern Electric Research and Development Laboratories, and, the story goes, the company gave its technicians pocket protectors with the initials of the lab printed on them: N.E. R&D. As delightful as this story is (I mean, what’s more perfectly nerdy than a bunch of techies walking around wearing pocket protectors that say “NERD” on them in giant letters?), it’s probably not true. Burrows reports that the name "Northern Electric Research and Development Laboratories" wasn’t used until 1959, eight years after “nerd” appeared in Newsweek.

The OED gives “nerd” two definitions: “An insignificant, foolish, or socially inept person; a person who is boringly conventional or studious,” and “a person who pursues an unfashionable or highly technical interest with obsessive or exclusive dedication.” I think most of us would agree that the first usage is fairly outdated — calling someone a “nerd” nowadays is hardly scathing criticism, and it’s not usually used to mean that someone is “boringly conventional.”

The second definition — someone who follows an interest with intense dedication — feels more accurate, except for the idea that the “interest” in question must be “unfashionable or highly technical.” If the recent box office explosions for films like Star Wars: The Force Awakens and Deadpool have taught us anything, it’s that the topics once seen as quintessentially nerdy are now barreling into mainstream culture. And we’ve learned, moreover, that the topic of interest isn’t really the thing that defines being a nerd — it’s how people approach it that makes them nerdy. I think that’s why “nerd” has evolved to become a verb in recent years — e.g. “I’m going to completely nerd-out on this book” — as well as a suffix that can be added to nearly anything (book-nerd, computer-nerd, font-nerd, crafting-nerd, [Insert-any-topic-you-can-devote-a-ridiculous-amount-of-brain-space-to]-nerd). “Nerdy” is a way of expressing interest and enthusiasm so intense that there’s no room for worrying about being “cool” or ironically detached. As a giant nerd myself, I think that’s a pretty great way to live.