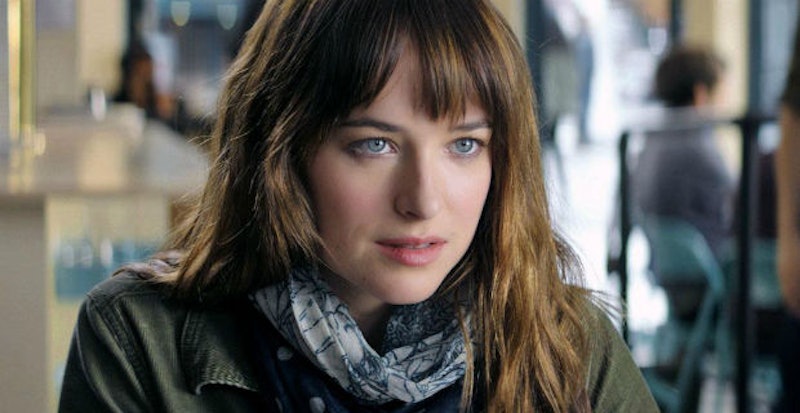 In case you weren't already aware, the movie Fifty Shades Of Grey received an Oscars nomination. All right, not exactly. While the movie itself didn't seem to pick up an Academy Award nominations, The Weeknd's song, "Earned It," that was made for the steamy book-turned-movie did receive a nod for Best Original Song. However, considering that the song "Earned It" had to be inspired by the actual events of the book and the film as well, this nod towards the song and lyrics is actually a subtle nod to the script and storyline of the film itself. In a weird kind of way. In fact, if you compare "Earned It" lyrics to Fifty Shades Of Grey , you'll find that there are a lot of movies from the film that perfectly synch up with the Oscar-nominated lyrics.

In fact, the lyrics match the movie so well that it's almost like Fifty Shades Of Grey the film actually did get that Oscar nod. The song is as sultry as the movie was steamy, and it sets the perfect tone for Ana and Christian's love. Or sexual relationship that fails to quite make it into love. So, without further ado, here is exactly how the lyrics from The Weeknd's "Earned It" can be compared to Kelly Marcel's scripted rendition of E.L. James' Fifty Shades Of Grey.

Ana was just trying to perform a simple interview for her friend. But, from the moment he sees her, Christian is intrigued to find out more about her and make sure he doesn't let her out of his sight. He doesn't see anyone but her.

Ana and Christian have already discussed how and why their relationship can't work. But that doesn't stop them from making out in the elevator. They don't pay any of the technical details any mind when they're alone and together.

Ana never wants Christian to keep anything a secret from her. His life is full of a dark past and hidden secrets, and his inability to open up to her ends the life of their relationship.

4. "So I Love When You Call Unexpected."

Remember that time in the film where Ana gets drunk and literally calls him unexpected? He then comes to her drunken rescue, and she stays the night.

Aside from having her sign a contract laying it all out on the table, both of them are itching to get to the spontaneous part of their relationship. Ana just wants the moment to take them away, and for Christian to allow himself to get swept up in the emotion. And, by avoiding the actual signing of the contract, she's allowing things to go in an unexpected route.

Christian will do anything to charm Ana. From fancy dinners to endless gifts to even taking her on a crazy helicopter ride. Basically, he thinks that she deserves the world.

In this moment, Ana is graduating from college and realizing how much she misses Christian as he gives his speech. This is the moment she realizes that maybe speaking to him again would be worth it. Because, between her newfound degree and his thriving business, well, they deserve it.

8. "On That Lonely Night, You Said It Wouldn't Be Love, But We Felt The Rush."

At this point in the film, Christian finally decides to reveal his secret obsessions with Ana. He is putting all the cards on the table as far as where their relationship is going. But, even if love is not in the cards, they both couldn't hold back their feelings for each other.

9. "It Made Us Believe It Was Only us. Convinced We Were Broken Inside."

Every time these two got in a fight, something simple like dancing or wooing Ana with champagne seemed to get in the way. Although he had his own heartbreaking backstory and she had her own personal concerns, when they were together, they couldn't deny their mutual attraction.

The clear downfall of their relationship came with the disconnect. With Christian being so used to relationships being purely physical, he doesn't know how to do regular couple things (like dinner with the parents) with a girl otherwise. Right after this moment is when they happen to get in a fight over this very topic.

When she finally gets to go into the playroom for some fun, she earned it. Seriously, it was a long time before they trusted each other enough for this stuff to finally happen.

The Weeknd gave this film a soundtrack that was unforgettable with this single song alone. Revisit it below, and you'll basically know everything you need to know about the plot of Fifty Shades Of Grey.