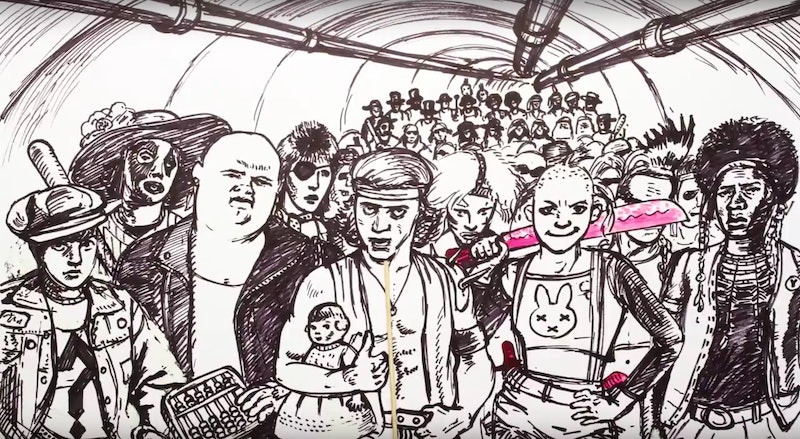 A new sex ed resource out of Australia called The Practical Guide to Love, Sex, and Relationships is aiming at giving adolescents, well, a practical guide to love, sex, and relationships. "Practical," in this case, means offering curricula besides putting condoms on produce and terrifying STI-related Google image searches. Australia has always been leagues ahead of the United States in offering inclusive, sex-positive sex education, and the Practical Guide is a comprehensive example of its commitment to ethical sex ed.

In the first course, the module explaining consent and boundaries doesn't even talk about sex. Instead, it uses kissing as its consent-driven act, "because sex has lots of cultural baggage":

"We establish the conditions in which it is ‘right’ to kiss – namely that it is mutually wanted, reciprocal, with a reasonable expectation of pleasure, and no-one is forced or pressured to do it."

And the boundaries this module tackles are topics like what to do if your girlfriend sends you 20 texts a day, your boyfriend wants to meet up every single day after school, or your significant other wants to swap Facebook passwords — and you don't like it.

The gender identity module's video is entitled "Freedom Fighters" and it depicts a dystopian landscape in which Martians with gender roles opposite of what they are here on Earth (read: run by the patriarchy) invade and force earthlings to embody the opposite gender role. The Earth girls see how restrictive and ridiculous it is to be forced to do "boy" things, and the Earth boys see how nice it is to get to do some "girl" things, like be emotionally available and comfort sad friends. Ultimately, a growing rebel force of earthlings with varied and complex gender identities band together to defeat the Martians and dismantle their restrictive gender ideas (revealing, of course, how restrictive patriarchal gender ideas are here on Earth). Sidenote: can this be the plot of a future Star Wars movie?

After the narrative part of the "Freedom Fighters" story wraps up, the video goes into practical illustrations of how all genitals are biologically homologous (ie., they originate from the same evolutionary structure), though they all differ in appearance. This easily opens up the conversation for what trans*, intersex, or other genitals besides "male" and "female" structures might look like.

It's eminently clear how much more affirming a sexual education curriculum can be when it starts from a baseline assumption of sexual desire as normal, healthy, confusing, or possibly absent, instead of preaching fire and brimstone ie., genital warts and teenage pregnancy.