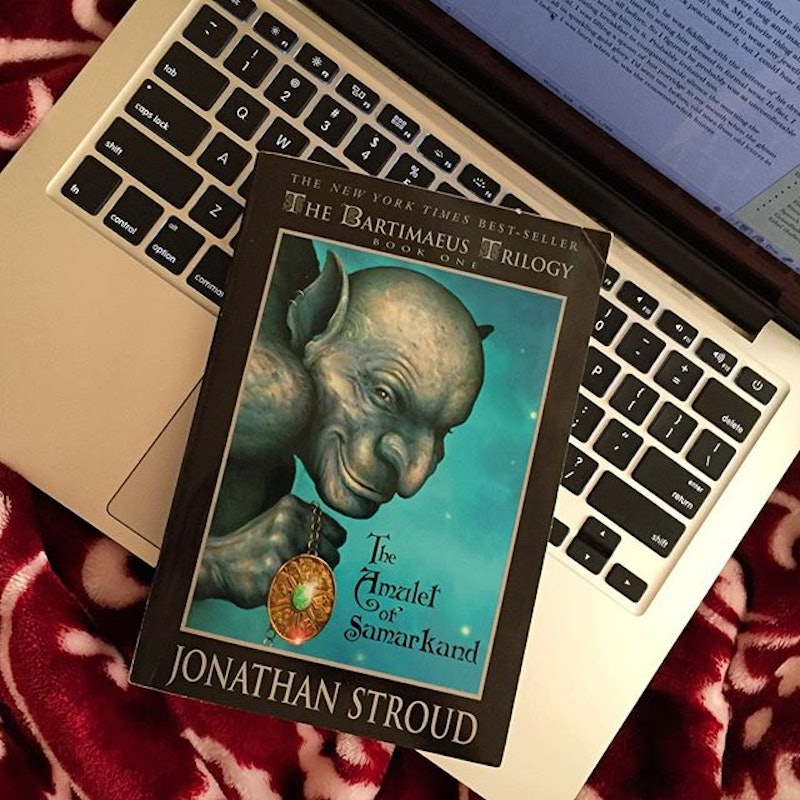 There are many things that make up a person's sense of humor: the books they've read, the people they've known, how much of a struggle high school was (because nothing breeds a sense of humor like having to defend yourself from haters). For me, I think my love of comedy grew out of prolonged exposure to Monty Python as a child, as well as my deeply uncool middle school years — big shout out to everyone who was friends with me even though I'd seen all of Star Trek and had a rolling backpack.

And then there was The Bartimaeus Trilogy. Three books that undoubtedly helped to shape my sense of humor (so please blame author Jonathan Stroud if you don't like any of my jokes).

Now, I know that it's been re-titled The Bartimaeus Sequence, but it was those first three books that affected me so much growing up. And, of course, it wasn't the only funny book series of my childhood: A Series of Unfortunate Events has its dry humor, The Hitchhiker's Guide to the Galaxy is absurdly hilarious, and the Weasley twins have their witty moments.

But as far as wisecracking demons go, my heart belongs to Bartimaeus. (Anyone else have a huge crush on Bartimaeus as a kid? No? Just me? Cool.)

The Bartimaeus Trilogy begins as the story of a young British orphan. He's destined to be a great magician, but for now he's just an 12-year-old living under the roof of his cruel guardian. Sound familiar? Well, imagine that instead of a secret Wizarding World, this is a universe in which bureaucratic magicians rule over Muggles in a corrupt magical oligarchy (kind of like if Voldemort won). British Imperialism is still alive and well. And instead of brave little Harry Potter making friends and saving the day, we've got vengeful little Nathaniel, summoning demons in a Faustian rage.

Because the magicians of this world don't actually do any magic themselves — they summon spirits and djinn and force them to do their bidding on threat of excruciating pain. And then they turn around and use their tortured djinn to subjugate the lower classes of non-magician commoners. You know, for kids!

The real star of the books wasn't Nathaniel, though, or even Kitty, the tough commoner girl who shows up in book two to take down the government. It was the titular Bartimaeus, the self-absorbed, sarcastic djinni. He's an ancient shape-shifter prone to dramatics and over-exaggeration (so naturally I identified with him at once). And does Bartimaeus come to genuinely care for at least one human boy over his 5,000 years of life? Yeah, but it sure as hell isn't Nathaniel. Bartimaeus and Nathaniel are bitter frenemies from the get-go and spend most of the books stewing in hatred for each other.

I liked the gloomy setting of alternate history London, and Stroud's dark take on a magical world. I even liked the increasingly snotty character of Nathaniel. But what really caught my imagination as a kid was Bartimaeus. His chapters were the only first person writing in the book, and they were peppered with footnotes, tangents, and historical references of dubious accuracy. The djinni would consistently claim to have been there for almost every major historical event (he's worked for King Solomon, Nefertiti, and Tycho Brahe), and he was all in all a delightfully unreliable, sardonic narrator.

The jokes would play off of myth and history, and the footnotes would mess around with narrative form — sort of like if David Foster Wallace wrote children's fantasy, and also lightened up a bit.

The jokes would play off of myth and history, and the footnotes would mess around with narrative form — sort of like if David Foster Wallace wrote children's fantasy, and also lightened up a bit. Even when the plot wasn't a bundle of laughs, Bartimaeus would find a way to insult Nathaniel's fashion sense or do a metaphorical take to the audience (there was a lot to be said at the expense of Nathaniel's pocket squares in the second book).

And that may have been why Bartimaeus stood out among all the other literary jokers of my childhood: His series wasn't an out-and-out comedy. But he was still funny, no matter how bleak things got. (It helped that most of his jokes played to history nerds, too.) His sense of humor always felt like a defense mechanism; making jokes and mocking his masters because he had not other measure of control in his life. True, being a kid is not entirely the same as being a 5,000 old djinni with a bad attitude, but I could relate to that feeling of using comedy as a lifeline.

No, the Bartimaeus books didn't have the overall absurdity of Douglas Adams, or the warmth and comfort of J.K. Rowling, or the wry narration of Lemony Snicket. But they had their own brand of comedy, the kind that laughs in the face of power structures and lampoons higher authorities. And it was just the right style of humor for any kid who was starting to doubt the fairness of the powers-that-be. It certainly cracked me up as a kid, and probably made me twice as obnoxious for years to come (sorry, parents). Bartimaeus would have been proud.

(...or possibly not, because one of his chief character traits was not caring very much about what most humans do. Either way, thanks for the laughs, Bartimaeus.)