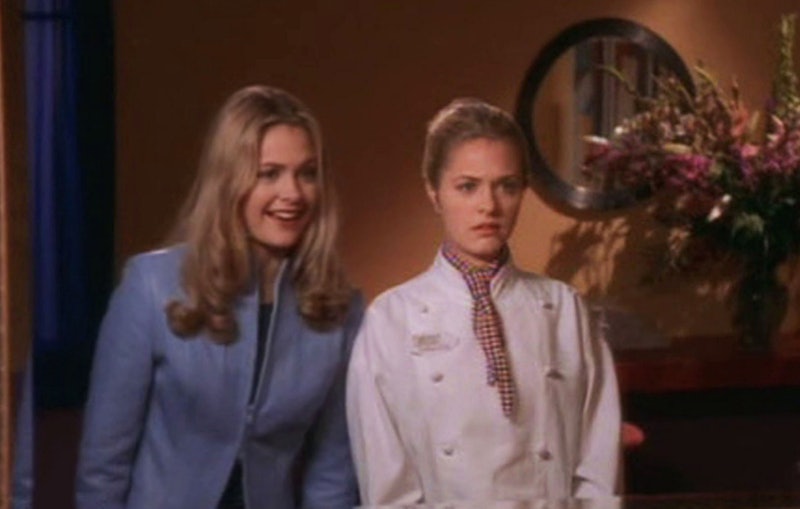 I have a confession to make: This afternoon, I watched Disney Channel television movie Model Behavior for the very first time. Yes, it took me this long to finally put the 2000 made-for-TV movie in my eyes. Don’t ask me how I missed the Model Behavior boat back in ‘00s; as much as I loved all things Disney Channel and boy band *NSYNC, you would think I would’ve cleared my schedule the night this movie premiered on television. And yet, that did not happen. Model Behavior and I were like two bespectacled, pancake-loving ships passing in the night. Until now, that is.

As far as the pantheon of great movies about lookalikes who trade places is concerned, Model Behavior is up there with The Lizzie McGuire Movie, the Parent Trap, It Takes Two, and Enemy. When high school student Alex (Maggie Lawson) and model Janine (Maggie Lawson) literally run into each other at a fashion industry party, they realize something: they happen to be totally identical, albeit totally unrelated strangers. Rather than attempt to figure out how or why they look so much alike, the duo hatches a scheme: Disenchanted with the supermodel life, Janine asks Alex to switch lives with her for a week. When Alex doubts that they’ll actually be able to execute this caper without a hitch, Janine replies they’ll be able to pull off the switch “as easily as an angora sweater during a quick change.” And with that, the swap begins.

In honor of Model Behavior's sixteenth birthday, here are 16 of the things that make this movie a must-see classic:

Now THAT is how you kick off a flick.

2. Kathie Lee Gifford & Son Cody Gifford Are In This Movie

Both Giffords bring their A-game.

3. Justin Timberlake Plays One Of The Love Interests

This performance is one of the gemstones in the crown that is J.T.'s filmography.

Josh, Alex’s handheld camcorder-toting snitch of a younger sibling, is played by Daniel Clark, aka Sean Cameron from Degrassi: The Next Generation. I'd be lying if I said I didn't shriek when I recognized him.

5. The Movie Employs One Of The Greatest Movie Tropes Ever

And that trope is, but of course, the removing-the-glasses-to-reveal-a-the-hottie-that’s-been-there-the-whole-time trope. Oh, but that’s not all: Alex also realizes she looks exactly like a famous supermodel. Hey, you never know what'll happen when you finally take off your specs!

If I ever win the lottery, I will hand this screengrab to an interior decorator and say, "Make this early aughts work of art happen. Spare no expense."

7. “Those cuticles are insured by Lloyd’s of London.”

I definitely googled “can cuticles be insured" after I heard Janine utter this line. And then I fell down a cuticle maintenance how-to guide rabbit hole. I might still be there.

When the switcheroo shenanigans begin, this Belle Perez JAM fires up. It's a magic movie moment.

Dripping in keychains, I might add. The glamour! The elegance! The timelessness!

10. “Because You Never Know When You Milk’s Gonna Turn On You.”

11. The Moment When Janinie & Alex Don't Realize The Restaurant Bathroom Mirror Is Missing

12. The Moment When Janine & Alex Finally Realize The Restaurant Bathroom Mirror Is Missing

It only takes them, like, 45 minutes to realize they're staring at another human.

13. The Feathered Headpiece Alex Wears Down The Runway

14. The Moment When Janine Hands Over The Glasses

It might be one of the most dramatic eyewear scenes in the history of film.

Happy sweet 16, dearest Model Behavior. I'm sorry it took us this long to meet, but better insured cuticles than never.