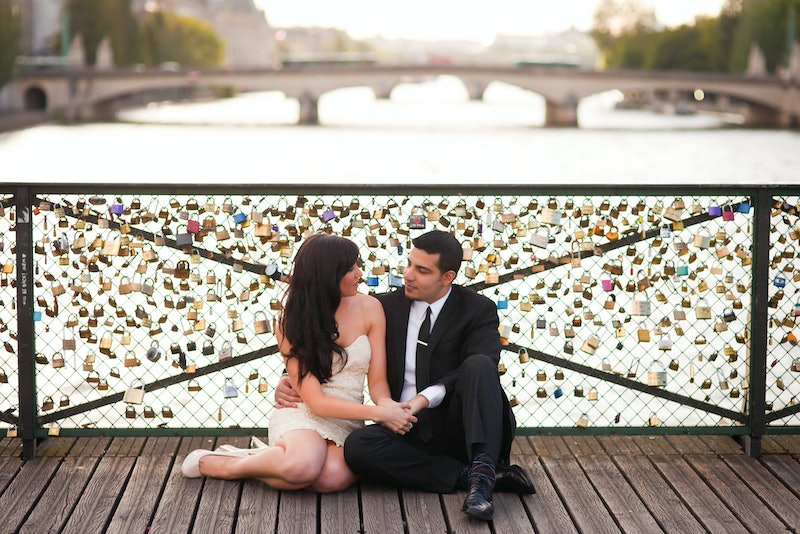 Leap Day helps keep our seasons and calendar where it should be based on the time it takes Earth to make its way around the sun, but what other traditions are associated with the elusive 29th day of February? Since the creation of Leap Day in the first century BC, only one Leap Day tradition has been able to get a foothold and is still recognized in the UK and Ireland. Prepare to meet my not-so-secret inner history major.

The Leap Day tradition that I'm referring to is the practice of women proposing to men. But before we get down on one knee, let's check out the origin story for this practice. History traces this tradition to fifth century Ireland where Saint Brigid of Kildare, an early Christian nun and co-patron saint of Ireland, beseeched the famous Saint Patrick for a day when women could propose marriage to longtime suitors.

Of course, there is some debate as to whether or not Saint Brigid ever really existed, or if she was purely the Christianization of the Celtic Goddess Brigid, whose early February festival Imbolc (which, you may remember, was an early ancestor of Groundhog Day) was replaced with the Feast of Saint Brigid by the Christian church. Saint Brigid also absorbed many of the druidess characteristics of her Celtic counterpart, including an unfailingly charitable nature and a purity so intense that, as legend would have it, baby Brigid had to be fed by a cow rather than digest food having been touched by the tainted hands of her impure father. She sounds pretty pure... and surprisingly feminist, whoever she was.

Another version of the Leap Day proposals story concerns Queen Margaret of Scotland who supposedly enacted a law in 1288 that allowed women to propose to men during the Leap Year. Any man who refused said proposal was charged a fine which could be paid in silk dresses and gloves.

The problem with both stories is the timing. If Saint Brigid ever existed, she was only eight years old when Saint Patrick died, and the Queen Margaret who was fabled to have created that 13th century Scottish law was only five years old in 1288, died when she was seven years old, and never actually set foot in Scotland. If either of those little girls were creating embittered marriage policies before they were old enough to get their first period, in the immortal words of Hagrid, "I'll eat Buckbeak."

Another place people point to when searching for the origin of this tradition is to England, where the government did not recognize Feb. 29 as an actual legal date, so traditions, like gender norms in the marriage process, were also upended on the day in a sort of ironic celebration of the day that never officially existed.

By the 18th and 19th centuries, Leap Day was noted in letters, such as one from Ellen Tucker Emerson to her father Ralph Waldo Emerson, as an occasion for girls to ask boys to a dance, a precursor to today's Sadie Hawkins dance.

Fast-forward to 2010 when Spyglass Entertainment released a film based on this tradition in which Amy Adams flies all the way to Ireland to impatiently propose to her cardiologist boyfriend-of-four-years, only to have him beat her to the punch in an emotionally void attempt to win a bid on a luxury condo.

Conveniently, Adams meets a handsome Irishman along the way whose utter dismay at her deep seated Americanness turns into a kind of affection. After dumping the unromantic doctor, Adams returns to Ireland and tells her new one true love that they should date. He rejects that proposal and busts out an engagement ring, which to be honest, kind of sucks all the female empowerment out of this one.

In 2016, let's roll out the next phase of this Leap Year tradition and empower women to talk to each other and to our partners about marriage in an open and honest way rather than treating it as a coy game or an achievement to unlock with sandwiches. Whether the year is 365 or 366 days long, be a partner to your partner and don't wait for one day out of 1,461 to communicate how you feel about signing up for a lifetime commitment.

More like this
The Best Time To Date After A Breakup, According To Experts
By Bustle Editors
22 Movies On Netflix That Are Perfect For The Whole Family
By Bustle Editors
20 Things You Should Never Tolerate In A Relationship
By Rachel Sanoff and Kathleen Ferraro
12 Ways You're Sabotaging Your Love Life
By Teresa Newsome and Lexi Inks
Get Even More From Bustle — Sign Up For The Newsletter