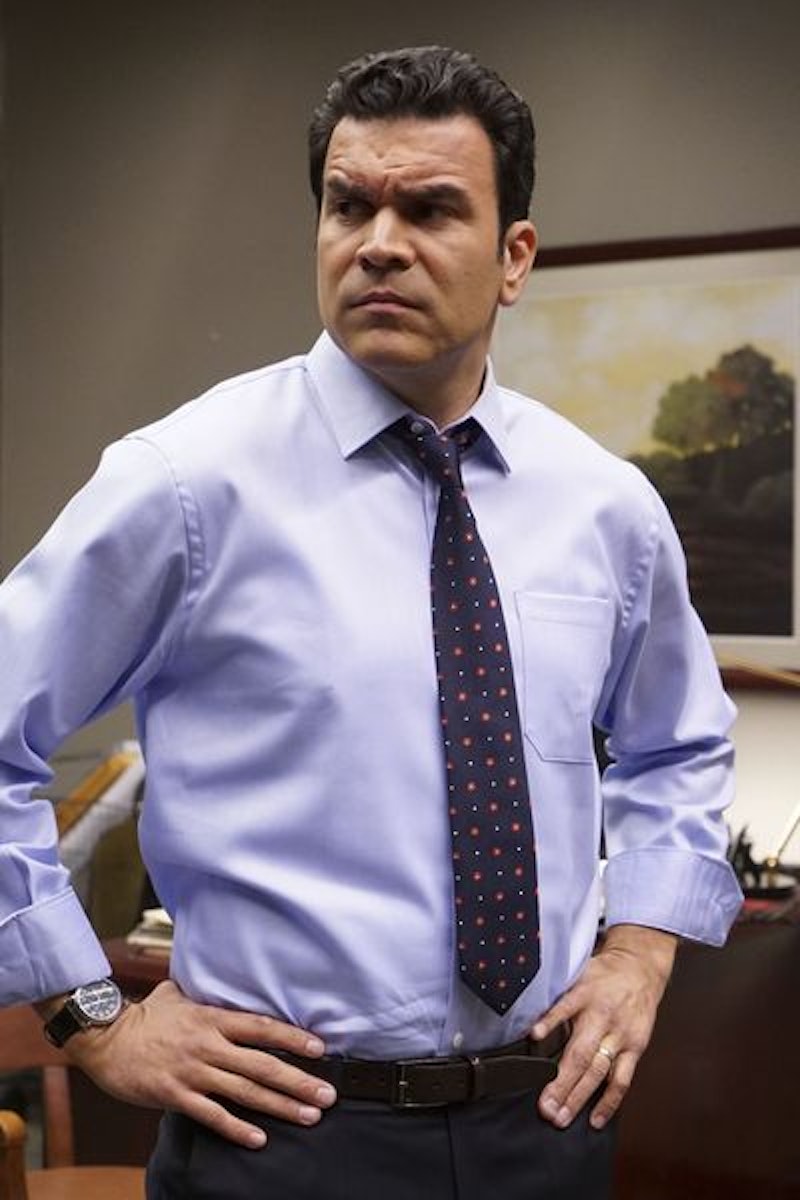 I don't know if you've noticed this about Cyrus on Scandal, but he really doesn't like when he doesn't get his way. And on last week's episode, after his little chat with Mellie about her race for president, he realized that she wasn't giving him the credit he thought he deserved... and he wasn't pleased. What happens when Cyrus gets pissed off? He gets even. And although he's done some pretty despicable things in the past, his latest plot might also be his worst. Cyrus masterfully created a president on Scandal to compete (and possibly crush) Mellie in the election, but people actually had to die in the process.

Here's what you need to know: His name is Governor Vargas, and he's the first ever Hispanic governor to be elected in Pennsylvania, which immediately makes him a big deal. And just in case you were wondering why he looks so familiar? He's played by Ricardo Chavira, the man who played Carlos Solis on Desperate Housewives. Oh, and his Scandal character's the perfect guy for Cyrus to mold into a presidential candidate.

Cyrus' plan was well thought out, if not totally horrifying. He and Tom — yeah, the same secret service agent responsible for the death of Fitz's son, Jerry — hired a gunman to open fire in a government building and take Governor Vargas hostage. Why is this a big deal? Because Vargas is the ideal presidential candidate. He's a nice, genuine guy who is well liked and not bad to look at, either, but he still needed that extra something. And by putting him in such a scary situation, he had the opportunity to become a hero in front of the American public, and he unknowingly played right into Cyrus' hands.

And BTW, if Olivia knew about this, she'd be seriously pissed.

Because after the gunman shot him — in the shoulder, of course, so as not to kill him — Vargas tackled him, saving the day in a moment that was broadcast on the news all over the country. Who wouldn't love that guy? And more importantly, who wouldn't vote for a guy like that? It was the only thing that could have possibly made someone more sympathetic and easy to root for than Mellie, especially since her book is obviously going to win over a lot of voters.

It was evil, terrifying, and ridiculously smart at the same time, I'll give him that. But mostly terrifying.

Oh, Scandal. You keep giving me more reasons to wonder if Papa Pope is actually the scariest character on this show. For now, Cyrus might be the winner.