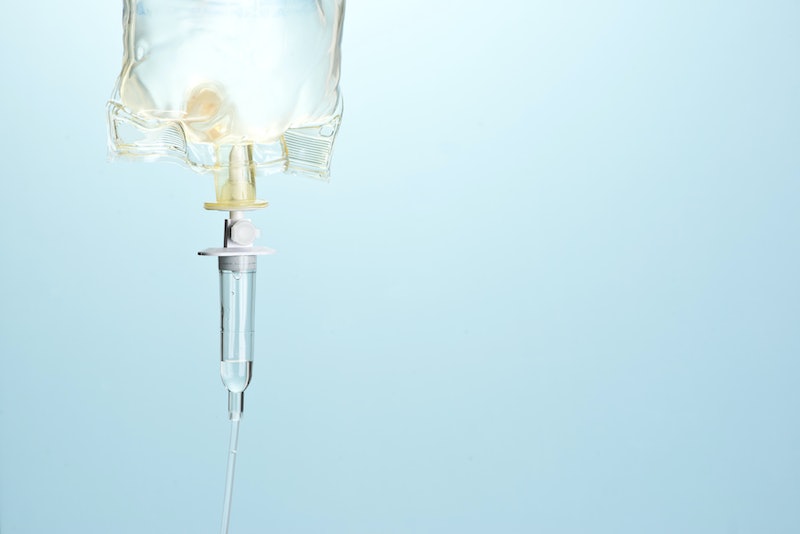 Sick of being sick and hungover? The IV Doctor (an entrepreneurial New York urologist) is here to help! 24 hours a day, seven days a week, The IV Doctor promises to provide in-home, hotel, or at-the-office I.V. hydration for dehydration relief. "You can even eat, text, and talk on your cell while getting your infusion treatment," the IV Doctor says. And yes, they'll pick up food for you on the way if you request it.

"Dehydration relief" from a hangover and its accompanying symptoms involves intravenous hydration that the doctor also claims will help with a quick recovery from flu, stomach virus, jet lag, exercise fatigue, and general exhaustion.

The Doctor's most popular service is the "Revive," suggested for those who are on their "deathbed." The $249 package includes:

- Add bonus B12 for $75 or further customize your package with The Doctor's advice!

This isn't your average Advil and Gatorade cure.

IVs allow vitamins to be 100% absorbed into your body, rather than at the rate of 50-60% when consuming them orally. The IV process only takes about half an hour, so after your wild night out in Atlantic City, you can catch the early train and make it back to the office.

The Doctor claims that if a patient requests his services more than twice a week he would refer them to an alcohol abuse treatment program, but that has yet to be seen. The treatment is apparently perfectly safe and healthy, but I have to admit, I find it a bit fishy that The Doctor doesn't post his real name, nor his credentials or degrees, on his website. No way am I inviting someone without a searchable name into my home to inject me with (supposedly sterile) needles.

David Blend, an editor at Thrillist, tried the Revive package, and described the process as "painless...no big deal" but warns that he may be an exception.

The IV Doctor isn't the only one to offer intravenous hangover care: Hangover Heaven in Las Vegas has been injecting partiers since 2011 and Atlanta's Hydration Station even uses a pediatric IV needle to decrease pain for "squeamish" customers.

Celebrity BFFs Cara Delevingne and Michelle Rodriguez Instagrammed their matching IV drips to quickly cure their hangovers last week, and while this new treatment may be trendy, it doesn't really look fun at all.

Doctor I.V. offers group rates for friendsies who want to get dripped together as well as gift certificates so you can plan ahead for your bestie's wild night.