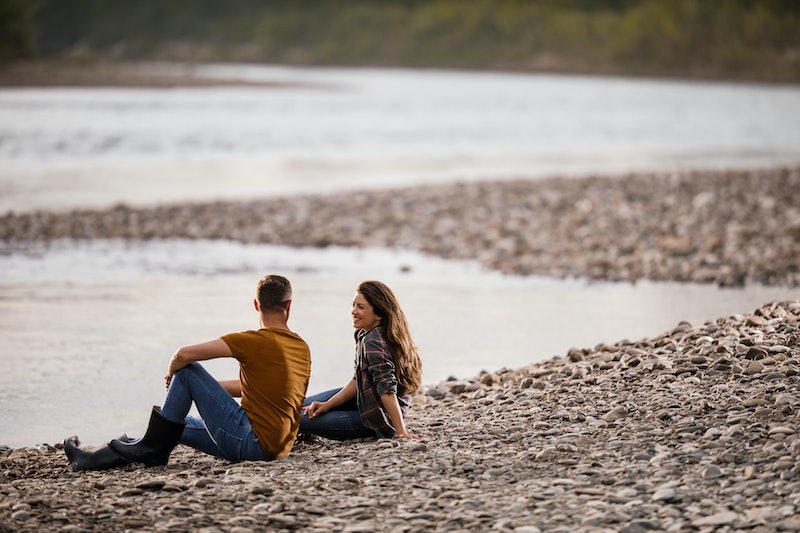 Being in an argument or receiving criticism from another person truly sucks. But instead of going straight into attack mode, there are ways to help you stop being defensive while learning how to communicate well with others. I'll be honest: About four years ago, I had no idea how to communicate without being defensive. Ever since I was younger, I always felt like I had to prove myself to everyone because I felt I was different. When I would be the butt of all jokes, instead of standing up for myself, I would point the finger at others or simply cry because I was completely frustrated.

After studying interpersonal and organizational communication in college, I began to understand what being defensive meant and how to tackle conflict in a healthy way. According to Psychology Today, Anna Freud, Sigmund Freud's daughter, helped illustrate that there are nine common defense mechanisms that everyone goes through in her book, The Ego and the Mechanisms of Defense. Whether you realize it or not, you've probably gone through most of these categories throughout your lifetime.

When it comes to using defense mechanisms, it tends to coincide with protecting ones self. But it's also in conjunction with how well you can communicate; once I learned how to productively talk about issues and disagreements with others (and I'm still learning to this day), I had the ability to truly express myself and what I was feeling. I learned that listening was just as important as speaking and jumping to conclusions was not going to solve anything. After a bit of time, the walls of defense started to go down, and I realized how quickly an argument can be solved once you allow yourself to be vulnerable and be OK with the thought of being wrong. Below are a few ways to communicate well without being defensive. This can take some time to adjust to, but once you learn how to stop putting your guard up, you can learn how to feel comfortable having with others without completely breaking down.

1. Be Secure In Who You Are

You're less likely to get defensive or hurt over something when you know for sure that it's not true. Being secure in yourself is one of the greatest gifts you can give to yourself because you won't need to be validated by anyone else besides yourself. According to Psychology Today, Austrian psychoanalyst Heinz Kohut said that finding a healthy medium of narcissism is actually good for you. Being a self-confident person, or healthy adult narcissism as Kohut called it, allows you to be able to handle those harsh criticisms, broken promises, or miscommunications with others. This can resolve a lot of issues when someone criticizes you, because of instead of jumping to conclusions, you can talk to them calmly without feeling like you have to defend yourself every minute.

Being in an argument with someone doesn't mean that you should be thinking about your next attack move while they are talking. You should try to genuinely listen to all of their points and see where they are coming from. When people get defensive, sometimes they automatically think that the other person is wrong. While that may be the case, there's a way to explain your part without completely ignoring what they have to say. According to The Huffington Post, the next time you're in an argument, take a moment to actually listen without strategizing your next thought process so you can defend yourself, because the less you try to protect your identity, the more better you may feel.

Have a clear indication as to why you feel defensive. Once you can understand why you feel the way you do, the person you're arguing with may be able to comprehend your emotions better. According to Psych Central, using I statements can allow you to keep the focus on your feelings and can prevent unfair accusations onto others. Instead of projecting your undesired feelings or thoughts onto another person, try to solidify what you need and how you want your emotions to come across.

4. Think Long-Term Instead Of Short-Term

When you're getting defensive, start to contemplate on the end goal. Being impulsive with your emotions means you're only thinking about how you feel at the moment. Strategize your thinking so you can accomplish long-term goals instead of trying to win the battle. According to Psychology Today, concentration camp survivor Victor Frankl had said, “Between stimulus and response there is a space. In that space is our power to choose our response. In our response lies our growth and our freedom.” Before you make any quick judgments, take a deep breathe and try to pay close attention to the result of your actions. Will they benefit you in the long run? Can you come up with a better response? Being defensive doesn't mean you have to be negative, there's a way to have a positive outlook while still protecting your identity.

5. Learn How To Receive Criticism

During those moments when you receive harsh criticism, there's a way to acknowledge it without being defensive. According to Forbes, remember the benefits of getting feedback even when you don't want it. Take the time to listen to what they're expressing to you, ask them why they are feeling this way, and strategize how you can use this to benefit you as a person or an employee. Even if you don't believe what they say is true, you can still be the bigger person, thank them, and walk away. You don't need to worry about what others think about you because you already know how you feel about yourself. While it can be a negative situation for a few moments, you can always turn it around into a positive by letting the negative feeling go.

No one can be right 100 percent all the time, it's just not possible. And even though you would love to be right, there are those moments when you may need to realize that the person just might be correct about what they are saying. According to Forbes, make sure you give yourself permission to be wrong, and also give that permission to others, too. By doing this, you're accepting the fact that it's OK to not get everything right on the first try, but also not to accept failure as the only defeat.

While defending yourself is never a bad thing, being defensive all the time can get exhausting. Instead of trying to save face when a tough situation arise, take a moment to find your space, acknowledge what they are saying, and try to benefit from it. There's a reason why this person is feeling a certain way; the last thing you want to do is ignore what they are saying and push their feelings aside like it doesn't matter. Be considerate, but straightforward, and in the end, hopefully you will feel like a winner instead of trying to defend yourself over and over again.

More like this
Here's Why Libras Are World-Class Conversationalists
By Nina Kahn
The Spiritual Meaning Of Angel Number 000, Explained
By Kristine Fellizar
How To Politely Reject Someone Who Keeps Asking You Out
By Laken Howard and Lexi Inks
It's A Pleasure #53: Help! My Boyfriend Won't Tell Me Why He Stopped Going Down On Me
By Sophia Benoit
Get Even More From Bustle — Sign Up For The Newsletter