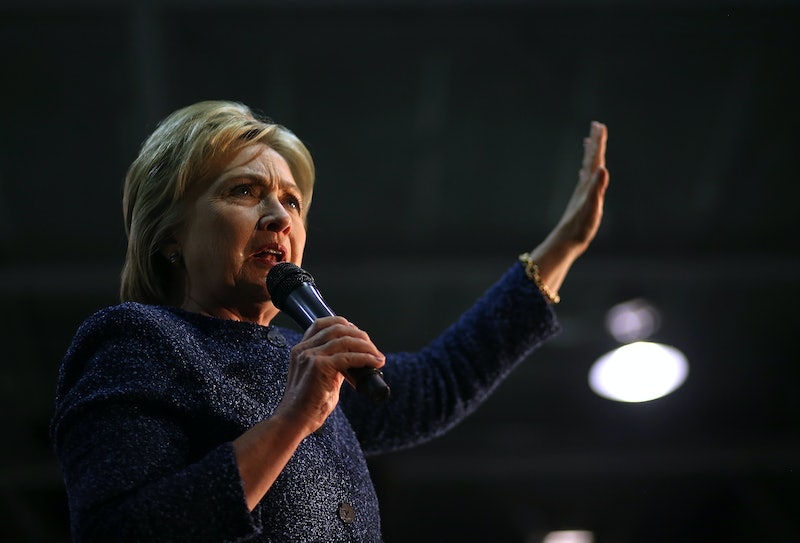 On Saturday, voters in the state of South Carolina cast their ballots in the state's Democratic primary, choosing between former Secretary of State Hillary Clinton and Vermont senator Bernie Sanders to be the party's standard-bearer heading into the 2016 general election. And when the dust settled, the outcome was exactly what the numbers and the prognostications suggested heading in ― the winner of the South Carolina Democratic primary is Hillary Clinton, and it wasn't close.

Look, there's no shock on this one, and if you needed any tangible proof, just look at her challenger's travel plans over the last few days. Rather than stumping and storming across the Palmetto State, Sanders has been charting a course through other, crucial upcoming states on the schedule. And when you look at the poll numbers he was staring down, trailing by an average of more than 25 points heading into voting on Saturday, you can hardly fault that as a strategic decision.

If Sanders is able to hang on to any hope of upsetting Clinton ― flipping over the Democratic Party's apple cart, you might say ― it'll only be because he nets enough wins on Super Tuesday to keep his delegate count credibly afloat. Clinton, on the other hand, gets to have a night without that heavy sense of urgency.

But only just one night, in all likelihood. 11 states will be casting votes for the Democrats on Tuesday, March 1st, and how things shake out could either guarantee a long, more arduous path to the nomination in July, or spell a much quicker end to the race. There's no doubt that Sanders is facing some steep, steep odds ― he's getting completely blitzed in eight of those states, facing dizzying double-digit deficits in Alabama, Texas, Georgia, Virginia, Minnesota, Colorado, Tennessee, and Arkansas.

And he's not even guaranteed to win those remaining three. He's still jockeying for position in Massachusetts and Oklahoma, leaving his only assured victory in his home state of Vermont, where he's leading by more than 70 points. Suffice to say, with this dominant victory tucked away safely in Clinton's pocket, she's poised to vault into a nearly insurmountable lead in a few days ― she could very easily take ten states, with a total of 865 delegates on the line. That's not even counting the superdelegates, either, which break strongly in her favor. In other words, thanks in part to the people of South Carolina, you're going to know a whole lot more about the shape of this race come Tuesday evening.