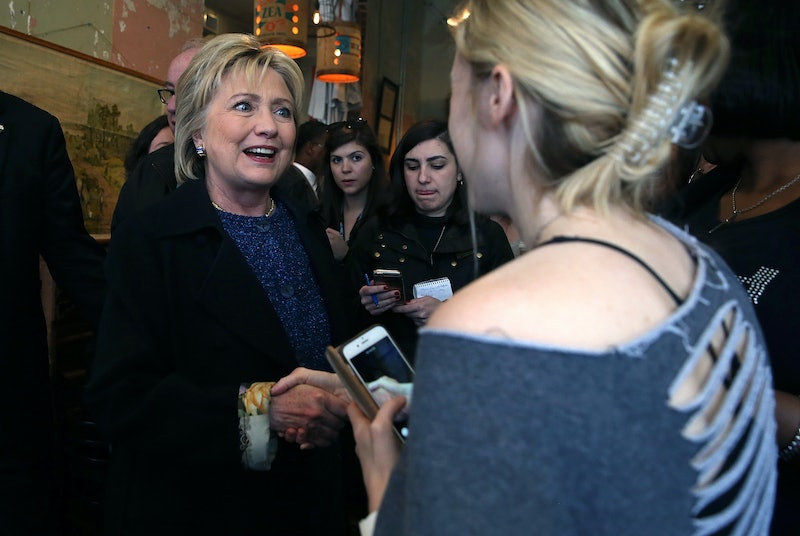 On Saturday, former Secretary of State Hillary Clinton won big in the early primary state of South Carolina, defeating her only Democratic competitor, Vermont Sen. Bernie Sanders. In doing so, Clinton not only proved that she had won over the Palmetto State's Democratic voters. Perhaps more importantly, Saturday night's results proved that Clinton can win the women's vote.

According to early exit polls published by CNN, Clinton won the vote of nearly 80 percent of women, leaving Sanders with just over 20 percent. Clinton has long been recognized as one of the most important women's rights activists in the world, a go-to ally for American women campaigning for equal pay and reproductive freedom. She had been expected to win the female vote easily — that is, until Sanders upset her lock on women earlier this month in New Hampshire. There, in the nation's first primary, a majority of female voters supported Sanders. Since the New Hampshire primary, Clinton has faced questions and criticisms about her ability to appeal to women in the face of a very feminist male competitor. On Saturday, though, it seemed clear even before all the votes had been counted that Clinton's perceived problem with women did not hold much water after all.

Clinton addressed women during her victory speech on Saturday, hitting on the same key issues she has talked about for years. "Don't you think we've waited long enough for quality, affordable child care and paid family leave?" she said. "Don't you think it's time for equal pay for equal work?" As she spoke, there were plenty of women cheering her victory in the audience.

Not only did Clinton win an overwhelming majority of women overall, she also scored big across the board when you break down the female vote more granularly. Exit polls revealed that Clinton won nearly 60 percent of white women and nearly 90 percent of black women in the Palmetto State. Additionally, 80 percent of married women and 74 percent of unmarried women reportedly chose Clinton. The idea that Clinton has a problem getting women to vote for her certainly did not reign supreme on Saturday.

Set to take her campaign "national," another sound byte from her victory speech, Clinton will likely have no problem appealing to female voters on Super Tuesday and beyond. It's not that the results from New Hampshire aren't compelling or valid. Rather, it's that South Carolina's diversity shows how Clinton can appeal to different groups of women — and Saturday night's results prove that her campaign is prepared to do so.