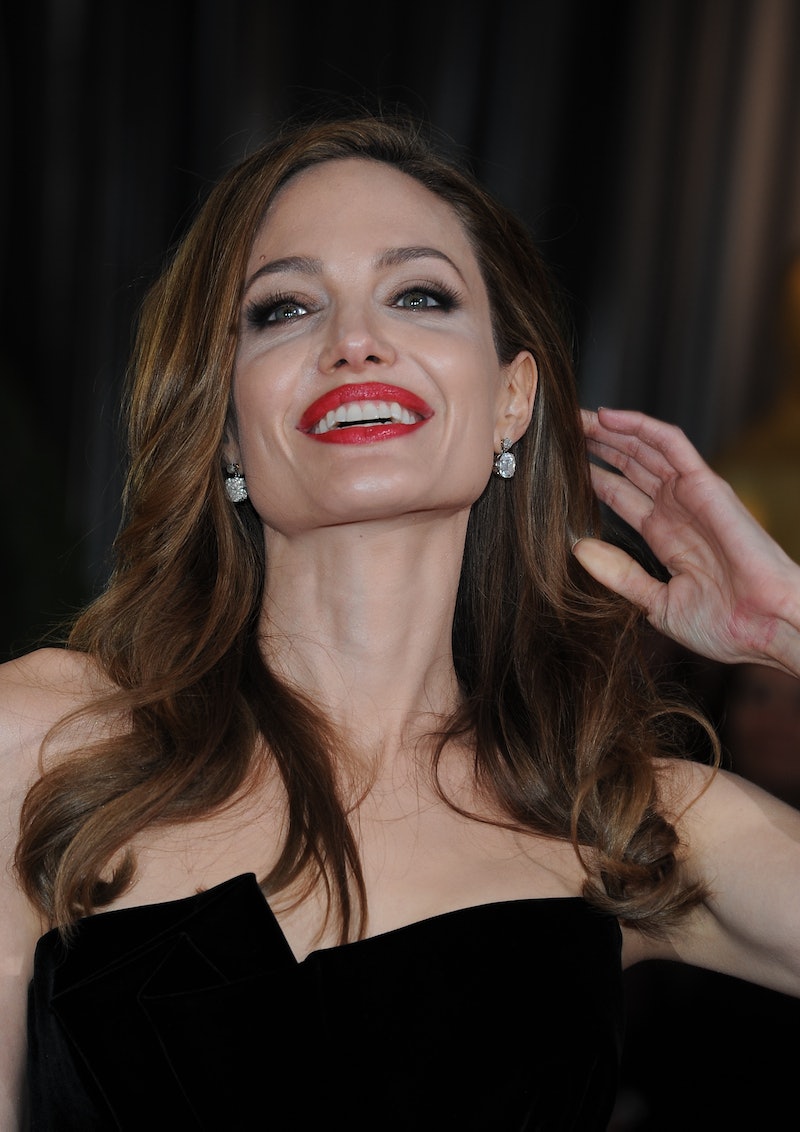 With the Oscars finally airing on Feb. 28, what I'm looking forward to most isn't Leonardo DiCaprio finally winning (or not winning) an Oscar, but the red carpet. The star we're most excited to see changes from person to person, but I personally can't wait to spot Angelina Jolie's Oscars outfit. From first appearing on the red carpet at age 11 in 1986 with her father Jon Voight to that now historical black dress with the leg split that was parodied for long after the main event, her ensembles have made history.

Jolie can pull off any outfit, but what I love most about her sense of fashion is that her style always elevates her beauty, instead of relying on it. She may not be nominated for any awards in 2016, but her outfit is bound to win on the red carpet regardless. I can't wait to see what she pulls out for this year, but while we count down the hours, looking back on the actor's best looks from the Academy Awards will get us through the wait.

With 20 years of on and off attendance at the Oscars ceremony under her belt, there have been some undeniably stunning outfits to come from Jolie. Here's a ranking of my absolute favorites.

The leg that launched a thousand ships. Jolie looked undeniably glamorous in her all black gown paired with the best accessory: herself.

Eight years earlier, Jolie rocked a dress in the opposite color and absolutely killed it. White's a notoriously hard color to wear, but Jolie did it effortlessly.

Like I said, it takes a certain kind of person to pull off all white, an when it comes to an all white suit? It's a bold move — and one I appreciate from Jolie, especially when it could've been all too easy to wear a gown.

The Morticia Addams vibes from when Jolie won the Oscar for Girl, Interrupted absolutely slay me. The almost black hair paired with an all black gown could have washed out any other human, but Jolie is clearly a gothic queen.

I just had to include this one. Baby Jolie supporting her dad is way too adorable not to make the list. She's wearing possibly one of the most '80s looks I've ever seen as well, from all the white lace to the layering of pearl necklaces and the quiffed hair. This image is a true testament to the decade.

Glamour reported that 2009 was Angelina Jolie's first Oscars ceremony with Brad Pitt, and the couple looked effortlessly beautiful and incredibly happy together.

This most recent look, and one of Jolie's best. Making the most of the recent trend of jeweled gowns and pulling it off perfectly, Jolie's ability to wear anything and make it look radiant shines through.

These looks prove that Jolie likes to stick to monotones, but pulls them off so well that nobody really notices the trend. She's also a queen at utilizing the simplest of color highlights — those 2009 green earrings, for example — to show off her extraordinary natural beauty. Fingers crossed that Jolie makes an appearance at the 2016 Academy Awards, so we get to catch her kill the red carpet again.