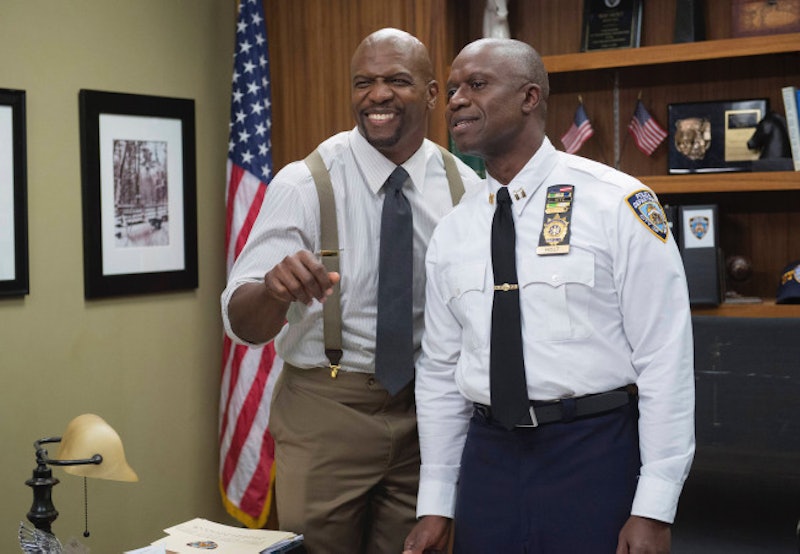 After the world's most boring Super Bowl, Brooklyn Nine-Nine woke us all up with a new episode, which was hilarious as usual. In a much more action-packed football game, the Nine-Nine beat the firefighters (including another brilliant cameo by Patton Oswalt), and Terry Crews reminded us that he was once an NFL defensive end. But the true gem of this episode was Captain Holt, who was finally involved in a large-scale prank.

Jake Peralta (Andy Samberg) may have begun the episode with his classic "Holt is a robot" jokes, but Captain Holt stole the show. For most of the season, Captain Holt has been a constant figure who encourages Jake to realize his potential and stands up for his detectives against the harsh forces of administrative bureaucracy that exists in the higher ranks of NYPD. He has shown Jake how to be a better detective, has kept Gina in check, and has shown everyone how to be even more loyal to their partners at the Nine-Nine. While his bone-dry wit and moral compass helped give the show a foundation for relationships between Gina and Rosa, for example, it has made Holt seem a little flat in the past, and made him seem like he was just there to be the stone-cold foil to Andy Samberg's trademark goofiness.

Luckily, this week's episode flipped those assumptions about Holt on their heads: while Holt still loves efficiency above all else, he also has a secret love of social experiments. When Terry suggests that they use statistics to increase office efficiency, Holt actually utters the word "fun," and agrees to prank his subordinates. Even though statistics may sound boring, Brooklyn Nine-Nine manages to make Holt's obsession goofy, using a cut scene of Holt crying while watching Moneyball (his favorite film).

Even more shocking, though, was that Captain Holt took the prank too far, trying to make the office as efficient as possible. Gina's stern tongue-lashing about his "experiments" from his Captain's chair rounds out the silliness, and completes Holt's transformation from too-perfect authority figure to fellow merry prankster.

Despite all this growth, though, we still haven't met Holt's husband, which is baffling. We've heard about his husband a few times, usually in reference to the fact that Holt is an openly gay police captain, and since Brooklyn Nine-Nine doesn't have a vendetta against showing spouses — we've met Sergeant Jeffords' wife and daughters — perhaps the next step in Holt's evolution will be a scene with his husband. Now that Captain Holt's character has finally gained some new, bizarre traits, we deserve to meet his better half. How long will we have to wait to meet the one man who might make Holt smile more than charts?