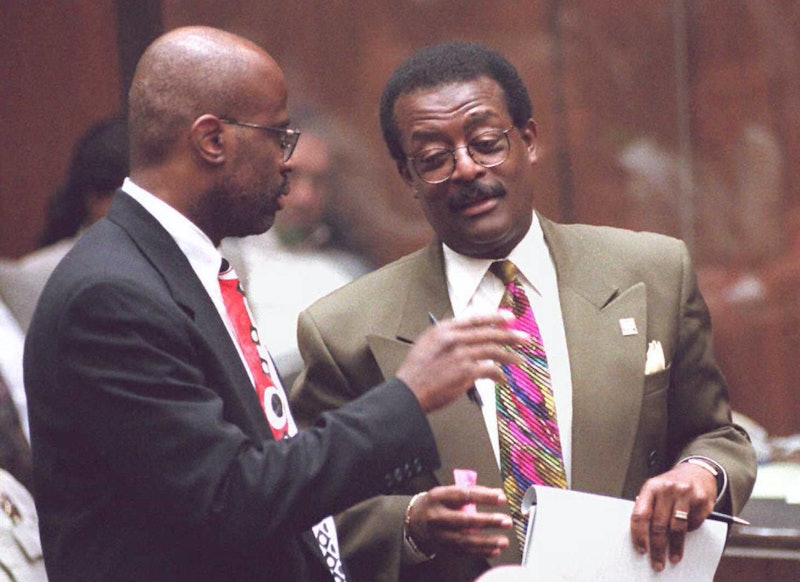 For the first few episodes of The People v. O.J. Simpson: American Crime Story, Courtney B. Vance portrayed Johnnie Cochran as an upstanding, almost heroic figure whose passion for social justice didn't quite line up with the Simpson trial — Vance even scoffs when another character suggests he might work on the case, calling it a "loser." So it might seem surprising to see Cochran not only join the case, but become lead attorney. However, Johnnie Cochran's history with police brutality helps to explain why the passionate defense attorney decided to take on the case, and why his arguments were so closely attuned to the racial politics of Los Angeles at the time.

In The People v. O.J. Simpson, Cochran's passion for social justice is represented by a moment when he gets pulled over by a member of the LAPD. According to a profile from the Washington Post, Cochran did have a frightening encounter with the LAPD in 1979 (15 years before this American Crime Story moment would have occurred), where he was pulled over and had his Rolls-Royce aggressively searched with two of his children in the car. In his book, A Lawyer's Life , Cochran describes the same incident and writes, "Within seconds, three other police cars squealed to a halt around me, officers were leaping out of their cars, guns drawn." And Cochran told the Post, "It was dehumanizing." At that point, Cochran was already a successful attorney who'd devoted his career to fighting racial profiling like what he experienced, and the incident in a way proved that even a very successful, wealthy black man isn't immune from being judged for his race.

Cochran's fight against police brutality began in the 1960s, when he first graduated from law school around the same time as the 1965 Watts Riots. And American Crime Story even included in an anecdote one of Cochran's most crucial formative experiences, the case of Leonard Deadwyler, who was shot by the police in 1966 while taking his pregnant wife to the hospital. Though Cochran lost the civil case with the jury ruling Deadwyler's death an "accidental homicide," according to Jet, Cochran told the magazinethat "no case affected [him] more." Other high-profile cases involving police abuses Cochran argued in court include representing football star Ron Settles' parents, whose son was killed while in police custody. When a settlement was reached, Cochran told the New York Times, "A substantial measure of justice has been achieved." Cochran also battled for years in the case of Geronimo Pratt, a member of the Black Panthers who was unjustly convicted and jailed for 27 years for a crime he did not commit. The Los Angeles Times calls the trial that put Pratt in prison a "sham," and goes on to explain how it was Cochran's tireless work as Pratt's defense attorney that eventually led to an overturned verdict in 1997.

These are just a handful of Cochran's most dramatic fights against police brutality and racism — there are dozens of examples. While some were critical of Cochran's aggressive and successful legal career, the attorney felt he was sticking up for victims — particularly black men — that no one else would. In A Lawyer's Life, Cochran says:

In a best-selling book, author Dominick Dunne wrote, "[Johnnie Cochran's] gotten rich over the years suing the LAPD for infractions against black people . . ." Infractions, I suppose, like breaking into an innocent young black man's apartment and killing him, or infractions like stopping an innocent young black man for speeding while he was driving his pregnant wife to the hospital and killing him.

Cochran begins the book by dispelling some assumptions people might have about his relationship with law enforcement. His son is a police officer, and Cochran writes "there are few people in this nation with more respect for law enforcement officers — and the law — than me." But in his experiences in Los Angeles throughout the twentieth century, Cochran saw quite a few incidents, including his own, that gave him a mission to find justice for the black community. And to Cochran, the amount of times he's defended black men against the police just shows how flawed the justice system could be, as he wrote, "Sometimes it seemed to me that I'd spent too many hours of my life defending the rights-and the reputations-of people who had been shot, beaten, or choked by police officers. The reality that the system failed to protect minorities was sort of our national secret."