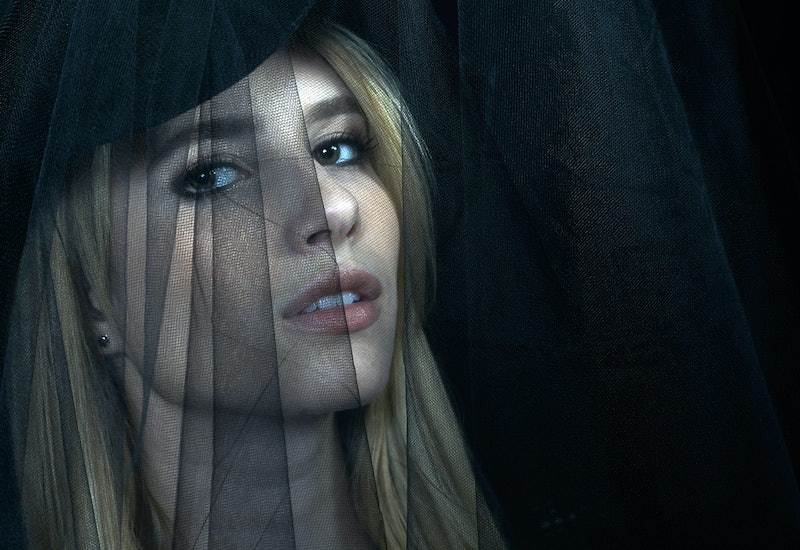 I know this theory is pretty far out there, but forgive me — it actually makes sense in some ways. Plus, I'm still mourning the end of this season, so it gives me an excuse to continue thinking about it without going over the same facts I already know. Cool? Cool. So, here it is: A new American Horror Story: Coven theory suggests that Madison Montgomery was the true supreme of the coven — not Cordelia, as the show said.

Crazy doesn't even begin to cover it.

The theory comes from a fan over at the message boards Fans of Reality TV, and has been making the rounds on Tumblr since. It basically suggests that, though Madison was unable to pass the Divination test when she was performing her Seven Wonders against Cordelia, she actually did exhibit signs of possessing the power in the episode.

Say whaaa? That's right — unconsciously, Madison did pick up a cigarette holder that we've previously seen Anna Lee Leighton holding in flashbacks. Perhaps she wasn't sure of how to control the power well enough to perform it as Cordelia did during the Seven Wonders, but it's possible she really did have it.

But, wouldn't that mean that both Cordelia and Madison were capable of being the supreme of the coven, since they would both have the necessary powers? Not exactly. The theory continues:

Another example is Cordelia didn't fully revive Zoe until Kyle choked the life out of Madison. If you watched that scene closely, they were going back and fourth between scenes and when Kyle finally kills Madison, Zoe finally revives. So it could mean that once Madison was fully dead, Cordelia became Supreme by default. Because again, a supreme has glowing radiant health, one second she had mutilated eyes, next thing you know she wakes up with perfect eyes, just as Madison was killed.

Now, I thought this scene was supposed to simply build up suspense, but the author here does have a point — creator Ryan Murphy is known to write in really subtle hints and employ techniques like this (for instance, he actually sort of revealed the ending to Coven in the opening credits this season), so it's fully believable that this could be true. Plus, it was strange that Cordelia's body would be able to heal itself so suddenly, the very second Madison passed. Would it have been possible that Zoe would not have been revived if Kyle hadn't killed Madison? Also worth noting: Completing the Seven Wonders does not immediately make a witch the supreme. So, how did Cordelia immediately regain her glowing, radiant health the second Zoe was revived? It could only make sense if Cordelia was actually second in line, and Madison was always meant to win the title. (That, or this is a plot hole. Also, is no one going to talk about the fact that Cordelia had on full eye make-up the second she regained her vision?)

One more note to drive this theory home: As the author points out, Fiona technically stole her supremacy from another witch, Mimi Delongpre, when she killed Anna Lee Leighton before she could reveal her choice for the supreme. As is explained in the show, the supreme always names the next supreme so that all the witches aren't forced to perform the Seven Wonders and possibly die (as Misty Day did) during the Descensum test. It was only because Fiona was thought to be dead that each witch performed it together — technically speaking, there could easily be multiple witches who are potentially the supreme, but the only one who's named by the actual supreme wins the title. As Fiona said: She could feel her power pouring out of her into Cordelia when she was the supreme, so it's possible that a supreme would be able to sense who the true winner is.

And, as everyone remembers...Fiona chose Madison first.

And lastly, as Cordelia stated in the show, it is the outgoing Supreme's duty to identify her successor. In the Flashback in episode 3, Anna Lee Leighton said that Mimi Delongpre called a council and had her performed the Seven Wonders (so Mimi had already pegged her). And when Anna Lee was killed by Fiona, the current council announced that Fiona was the witch that Anna Lee believed was the next supreme and had Fiona perform the seven wonders. (so again, Anna Lee already knew who was the successor would be and left that information in her will). So I believe a supreme will have instinct on who her next successor will be, and Fiona's first call was Madison.

It might be reading too much into things — but, again, this is a Ryan Murphy show, so it may not. Either way, it's an interesting theory...and certainly changes that whole "happy ending" thing the finale had going for it.

More like this
What Is the Net Worth Of Each 'Stranger Things' Season 4 Cast Member?
By Hugh McIntyre
20 Photos Of "Beefy" Jeremy Allen White To Tempt You To Watch 'The Bear'
By Radhika Menon
Everything To Know About The Flash Season 9
By Brad Witter
Who Is 'Stranger Things 4' Fan-Favorite Joseph Quinn Dating IRL?
By Grace Wehniainen
Get Even More From Bustle — Sign Up For The Newsletter