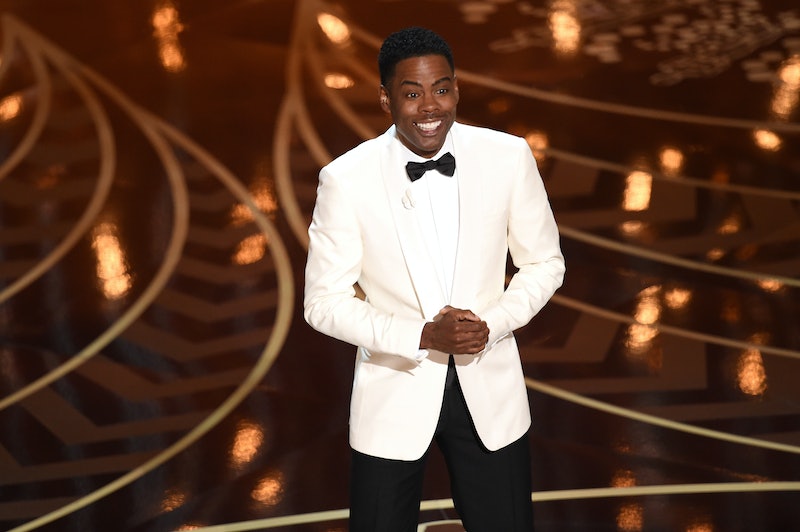 The opening monologue at the Oscars is often the most eventful part of the show. And this was certainly true so far of 2016 Oscars hosted by comedian Chris Rock. The hilarious performer wasted no time at all diving into the Academy's current controversy — the #OscarsSoWhite social media movement. He made some excellent and eye-opening points about racism in Hollywood. When he began his opening monologue by calling the Oscars the "White People's Choice Awards," audiences knew they were in for a brutally honest show.

Rock addressed #OscarsSoWhite and confessed he considered boycotting the movement, along with his African American peers like Jada Pinkett-Smith and Spike Lee. But in the end, the comedian joked: "The last thing I need is to lose another job to Kevin Hart."

Jokes aside, Rock brought to light a very real issue: This is the 88th Oscars, and award show has failed to highlight people of color for years, not just in 2016. "Black people did not protest," he said of Hollywood in the '50s and '60s. "Why? Because we had real things to protest at the time. They were too busy being raped and lynched to care about who won best cinematographer. When your grandmother is swinging from a tree, it’s really hard to care about Best Documentary Foreign Short."

The Oscars, where millions of viewers tune in each year, is the perfect place to shed light on Hollywood's racism. After all, the Dolby Theater filled with the industry's most influential minds. Here's his entire, vastly important monologue:

Man, I counted at least 15 black people on that montage. Hey, we are at the Academy Awards, otherwise known as the White People’s Choice Awards. You realize, if they nominated hosts, I wouldn’t even get this job. Y’all would be watching Neil Patrick Harris right now. Here’s the crazy thing. This is the wildest, craziest Oscars to ever host, because we’ve got all of this controversy. No black nominees. People are like, "Chris, you should boycott." How come it’s only unemployed people that tell you to quit something? No one with a job ever tells you to quit. I thought about quitting, I thought about it really hard. But I realized, they’re going to have it anyway. They’re not going to cancel because I quit. And the last thing I need is to lose another job to Kevin Hart. Kevin makes movies fast… porno stars don’t make movies that fast.

The thing is, why are we protesting this Oscars. That’s the big question. Why this Oscars? It’s the 88th Academy Awards, which means this whole no black nominees thing has happened at least 71 other times. You’ve got to figure that it happened in the '50s, in the '60s. One of those years, Sidney didn’t put out a movie, I’m sure there were no black nominees those years. And black people did not protest. Why? Because we had real things to protest at the time. They were too busy being raped and lynched to care about who won best cinematographer. When your grandmother is swinging from a tree, it’s really hard to care about Best Documentary Foreign Short.

What happened this year? People went mad. Spike got mad and… Jada went mad, Will went mad. Jada got mad, says she’s not coming. I’m like… isn’t she on a TV show? Jada is going to boycott the Oscars? Jada boycotting the Oscars is like me boycotting Rihanna’s panties. I wasn’t invited! I get it, Jada is mad…your man was turned down, I get it. It’s not fair that will was this good and didn’t get nominated, I get it. It’s also not fair that Will was paid $20 million for Wild Wild West.

This year, at the Oscars, things are going to be a little different. This year in the in memoriam package, it’s just going to be black people that were shot by the cops on their way to the movies. Yes I said it, alright. You want black nominees every year, you need to just have black categories. You already do it with men and women, think about it. There is no real reason for there to be a man and a woman category in acting. It’s not track and field. You don’t have to separate them. You know, Robert De Niro has never said, "I’d better slow this acting down so Meryl Streep can catch up." If you want black people every year at the Oscars, just have black categories, like: Best Black Friend. "And the winner for the 18th year in a row is Wanda Sykes. This is Wanda’s 18th Black Oscar."

But here is the real question everyone in the world wants to know: Is Hollywood racist? ... Is it fetch me some lemonade racist? No, it’s a different type of racist. I remember one night, I was at a fundraiser for President Obama. And it was me, and all of Hollywood. And there were about four black people there. Me, Questlove, Russell Simmons, the usual suspects. And every black actor that wasn’t working. Needless to say, Kevin Hart wasn’t there. So at some point, you get to take a picture with the President. You get a little moment with the President. I’m like, "Mr. President, you see all these writers, actors, and producers? They don’t hire black people. And they’re the nicest white people on Earth, they’re liberals."

Is Hollywood racist? You’re damn right Hollywood is racist. Hollywood is sorority racist. It’s like, "We like you, Rhonda, but you’re not a Kappa." But things are changing. We got a black Rocky this year. Some people call it "Creed," I call it Black Rocky. And that’s an unbelievable statement because Rocky takes place in a world where white athletes are as good as black athletes. So Rocky is a science fiction movie. There are things that happened in Star Wars that are more believable thanRocky.

It’s not about boycotting anything, it’s just, we want opportunity. We want black actors to get the same opportunities as white actors. That’s it. And not just once. Leo gets a great part every year. But what about the black actors? Jamie Foxx is one of the best actors in the world. Jamie Foxx was so good in Ray that they went to the hospital and unplugged the real Ray Charles. It’s like, "We don’t need two of these." Everything is not about race, man. Another big thing tonight is, you’re not allowed to ask women what they’re wearing anymore. It’s a whole thing: "ask her more." You have to "ask her more." It’s like, you ask the men more. Everything is not sexism, everything is not racism. They ask the men more because the men are wearing the same outfits. Every guy is wearing the exact same thing. If George Clooney showed up with a lime green tux and a swan coming out of his ass, someone would go, "Hey, what you wearing George?"

Welcome to the 88th Academy Awards. You want diversity, we got diversity! Please welcome Emily Blunt, and somebody whiter, Charlize Theron!

But racism isn't the only topic Rock brought forth during his speech. He also dove into an important point that goes hand in hand with a lack of racial diversity at the Academy Awards: sexism in the Oscars categories.

Rock said of separating actors categories into male and female:

You already do it with men and women, think about it. There is no real reason for there to be a man and a woman category in acting. It’s not track and field. You don’t have to separate them. You know, Robert de Niro has never said, 'I’d better slow this acting down so Meryl Streep can catch up.'

It's an excellent point among all the many ones in his speech. Why do we separate men and women in acting categories when both genders have an equal ability to produce award winning performances? Especially since there have been some years in which a particular gender produces more Oscar-worthy performances. Inclusiveness is one of the most important issues facing our nation, and Rock's monologue pushed to the forefront that conversation. The whole 20 minute monologue is worth your time, your energy, and your thought.