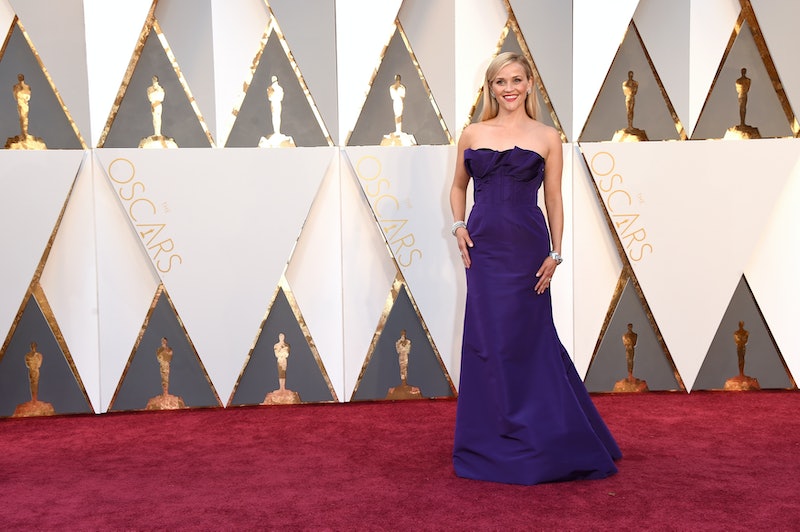 If red carpet fashion was a sport, then the Oscars would be the Olympics. In this competition, everyone wants to stand out, be an individual, and show off their style. And since so much press is given to dissecting each look, no one wants to be the person who couldn't throw together a unique outfit. However, it looks like Tina Fey and Reese Witherspoon wore the same dress to the 2016 Oscars. Kind of.

Now, most people can identify with the feeling of mild embarrassment that comes with showing up at a party in the exact same outfit as another guest. So I can only image how Fey and Witherspoon might have felt when they showed up at the Oscars in strikingly similar royal purple, strapless gowns that, at first glance, could almost certainly be the same dress, down to the exact jeweled-tone hue.

Though the color and shape of the dresses are remarkably similar, if you look a little closer, there are some differences. Witherspoon's dress is made of a taffeta-like material and has a more pronounced, ruffled neckline while Fey's dress is more of a chiffon and is tightly draped around the bodice. Still, it's basically the same dress.

What keeps Fey and Witherspoon from looking like twins, however, is how each of these women styled the dress, in very different ways. Fey rocked a sleek updo and a statement sapphire necklace while Witherspoon opted to let her hair down with a couple bracelets and sun-shaped diamond earrings.

Sure, the dresses are similar, but at the end of the day, each of these women is still an incredibly talented and unique individuals, even if they are wearing kind of the same gown.